The Emini sold off on the open to below the bottom of the 4 hour trading range, which was the low of the last 2 hour bar. That was the 1st pullback in a 14 bar bull micro channel on the 120 minute chart. Traders do not yet know if the double top with yesterday’s high is the start of the TBTL sideways to down pullback from the buy climax, or if there will be one more new high before the pullback begins. However, there is a 70% chance that there will be a 2 day correction that starts today or tomorrow since the 120 minute chart is so unusually overbought. Although the 4 day rally has been strong and there is an important resistance magnet above, the buy climax makes it likely that there will be a pullback before the Emini gets above 1940, if it gets there.

The bears need a strong breakout with follow-through before traders will conclude that the 2 day pullback has begun. The bulls need a strong breakout above yesterday’s high, but if they get it, the odds are that it will fail within 3 bars on the 120 minute chart and then be followed by about 10 bars down on the 120 minute chart. As strong as the 4 day rally has been, the odds are better for the bears for the next couple of days. If the bulls are able to get a reversal up, traders will buy it, but they will be ready to sell on any reversal down from above the high.

The Emini has been in a tight bull channel on the 60 minute chart, and each pullback has lasted only one bar. That means that there are higher time charts that are in micro channels, which means that they have no pullbacks.

This time is even more overbought. The obvious magnet of the February 1 lower high at 1940 is drawing the Emini up strongly. However, when a bull micro channel lasts 10 or more bars, it soon enters a trading range. Usually the 1st pullback is bought. That means that the first time it falls below the low of the prior bar, it is usually bought within a bar or two. This is then typically followed by a new high. The new high then usually reverses down within 3 bars, and a TBTL trading range then begins. If a micro channel is very extreme, and this one might be, the pullback can be much deeper and last for more bars than traders believe is possible, given the strength of the rally.

Since the micro channel is already the biggest one in more than 1,000 bars, there is probably a 60% chance of the Emini trading below the last 2 hour bar within the 1st 2 hours today, and a 90% chance that there will be a pullback below the prior bar at some point today. It will probably only last a bar or 2 (2 – 4 hours), and then the bulls will buy it. There will then be a new high that lasts from 1 – 3 bars (there are 4 bars each day), and then a 10 or more bar sideways to down move early next week.

The Emini is up 5 points with an hour to do before the NYSE open. Because of what I just wrote, traders should expect that any early rally will be sold and that any early selloff will be bought. This is consistent with the 4 hour trading range at the end of yesterday.

The 5 day selloff in the EURUSD has been strong. It is testing the 1.1100 support level in Europe with 45 minutes to go before the NYSE opens. That level is the bottom of the wedge top on the 60 minute chart, which reversed down on February 11. It is also the top of the 2 month trading range on the daily chart and the 20 day EMA on the daily chart. Even though the selloff has been very strong, it is now climactic and at support, just like the S&P500 index is in a buy climax at resistance. Both should enter a 2 day trading range today.

The EURUSD 60 and 240 minute charts have been in a shallow bear channel for 3 days. Although it is a bear trend, it is basically a trading range that is sloping down. It broke to the downside over the past 3 hours. That breakout will probably fail and the trading range will probably be the final bear flag in this leg down. The bounce will probably last a couple of days. The initial target is the top of the tight trading range just below 1.1200. If the bulls reversed up without 1st allowing a bear breakout, the upside target would have been higher.

The selloff has been strong enough to make traders wonder if the rally on the daily chart has ended with the 2 strong legs up from the December low. The daily chart has been in a trading range for a year. Trading ranges typically contain a series of 2 legged moves up and down, with each on disappointing trend traders who are hoping for a breakout. Eighty percent of trading breakout attempts fail, and the month long rally was likely to not lead to a bull breakout. However, traders were not sure it the rally would test higher up in the range.

Over the past few days, the odds are that it will not reach the August top of the range. However, it will probably bounce within a couple of days. The selloff has been strong enough so that the odds are that bears will sell the rally for at least a 2nd leg down on the 240 minute chart. After a wedge top, 2 legs down is the usual minimum goal. It will then probably test down to 1.1000, which is the middle of the year long range, and it has been tested repeatedly after every rally and every selloff. There is also a bull trend line there, which will probably be hit on the 2nd leg down. 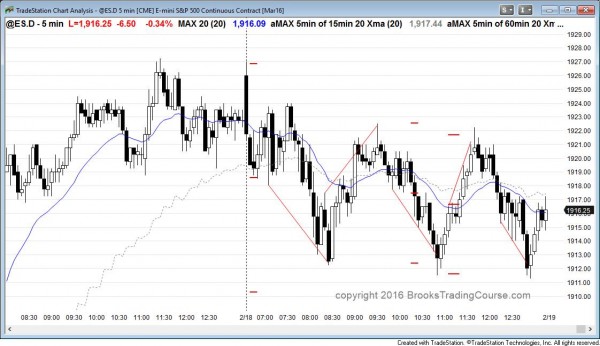 The Emini was in a broad bear channel today, with several legs with wedges and measured moves

After 14 consecutive bars without a pullback on the 120 minute chart, the Emini did what I said it had a 90% chance of doing today. A bar finally dipped below the low of the prior bar. This is a bear breakout below a protracted bull micro channel. The first reversal is usually bought, but the market then typically has a TBTL pullback within 3 bars of the attempt at trend resumption back up. I know this sounds confusing, which means that the 120 minute chart is in the early stages of a trading range. In fact, it has been in a tight trading range for 7 bars. Is that enough to work off the buy climax and make bulls comfortable to buy again? It is unclear. When things are unclear, traders are quick to take profits. This means that if the Emini rallies tomorrow, the rally will probably not get far.

The 60 minute chart has a wedge bull flag and the pattern is flat. This is a small breakout below a small breakout. The Emini rallied into the close. If tomorrow trades below the bottom of the wedge (today’s low), it might quickly fall for a measured move down. If it does, even of the selloff is deep, the odds are that it will be followed by a 2nd leg up after such a strong 4 day rally. The Emini will probably be sideways for at least one more day.