The Emini continued its trading range price action from yesterday. Day traders need to see a strong breakout with follow-through up or down. The bears want a breakout below yesterday’s low and then a swing down. The bulls want a breakout above the 60 minute moving average and a swing up. Without either, traders will be taking 1 – 4 points profit when they have it, and many will use limit orders to buy below bars and sell above. The bears still have slightly higher probability than the bulls because the reversal up was weak compared to the trend down. The Emini is currently Always In Short from the early reversal down, but most traders will only scalp until there is a strong breakout

The Emini had strong selling yesterday and that increases the chances of additional selling at some point today. Online day traders will watch for a breakout today. Because yesterday was in a tight trading range for the 2nd half of the day, it is in breakout mode. The bears want trend resumption down for a leg 1 = leg 2 measured move. The bulls see a higher low in the tight trading range and want a higher low major trend reversal. The reversal up from midday was weak and looks more like a bull leg in a bear trend.

On the 60 minute chart, the rally was a 3 hour bear flag. Although the probability at the start of the day favors trend resumption down, at least for an hour or two, the Emini would not have gone sideways for 3 hours if the bears had a big probability advantage. They have better than a 50% chance, but not a 60% chance. This means that there is maybe a 45% chance of a bull breakout above the bear flag, and a reversal of yesterday’s selloff. The bulls see the 60 minute selloff as a wedge bull flag over the past 3 days. Traders trading the daily chart see 2 legs down in a trading range, and the bulls expect the breakout below last week’s low to fail.

The Emini is down about 3 points in the Globex session, and it continued in a small range. There does not have to be a breakout today, and traders learning how to trade the markets should accept that the price action might continue sideways into Wednesday’s Fed announcement. If today opens quiet, online day traders will assume that yesterday’s tight trading range will continue and those who trade the markets for a living will continue to buy low and sell high, including with limit orders, scale in, and scalp out with quick profits.

Because yesterday had such a big bear trend, day traders will watch for a strong breakout with follow-through up or down. If there is one, they will swing trade at least part of their position.

Yesterday was a big bull day. The overnight session sold off. This is bad follow-through and it represents selling above last week’s high. Instead of bulls buying the breakout and possibly beginning a measured move up, they took profits. Instead of the bears waiting for a measured move up, they sold. This is more common when a rally is going to be limited, and be either a bear flag or a bull leg in a developing trading range the daily chart.

While it is possible that the rally will last for several more weeks, the trading over the past 24 hours makes it more likely that the 2 day rally will end up as part of a trading range. The bears see a wedge bear flag on the daily chart, made of the November 12 or 19 high, and then the December 3 strong bull breakout high. They expect at least 2 legs sideways to down over the next week, and a test of Monday’s pullback low. The bulls see Thursday’s rally as strong enough to have at least one more leg up after the overnight pullback. At the moment, the bear case is more likely.

The overnight selling pullback below the breakout high and the 60 minute chart has been sideways for the past 4 hours after its strong selloff. The bears want another leg down to the December 7 higher low around 1.0800. The bulls want at least one more new high first. Because the selling was strong on the 60 minute chart, and there was a big bear bar on the daily chart, the bears have higher probability over the next day or two. The next 100 pips is more likely to be down. The selling was strong enough last night to make it more likely that there will be sideways to down trading today.

The selling was climactic on the 5 minute chart and the EURUSD has been sideways at the support area at last week’s high. This means that day traders have been scalping for 10 – 20 pips for the past 4 hours. They will continue to do that today as well until there is a strong breakout up or down. 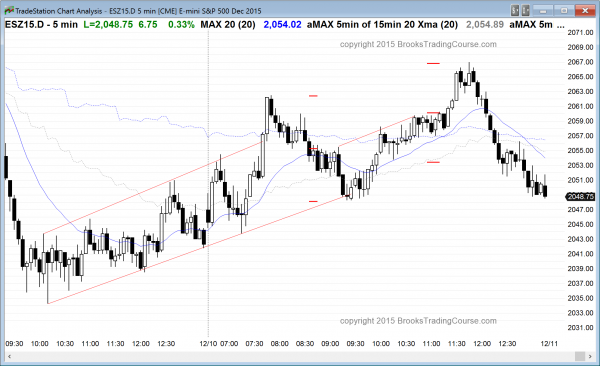 The Emini had an early rally that was followed by a channel up. There was a micro double top and then a bear trend in the final two hours.

The Emini was in a trading range today with a couple of rallies and selloffs and a close near the open. It was a doji bar on the daily chart and formed an ioi setup going into tomorrow.

The daily chart is at the apex of a triangle and it might breakout before or after Wednesday’s FOMC announcement. It is also possible that it just continues more sideways on the daily chart, but a breakout up or down is more likely. The Emini has had a lot of trading range price action over the past month, despite the big swings, and it is likely to continue up to the report.