The Emini began with a 2nd failed breakout above yesterday’s high. It is Always In Short. Since yesterday’s range was small, today has an increased chance of becoming an outside down day. Because ever trend up or down over the past week has failed to last more than a few bars, the odds are against a big bear trend day. The day will probably be mostly sideways until after the FOMC report.

The Emini had another trading range day yesterday going into today’s 11 a.m. FOMC announcement. It closed below the open, which created the 1st bear bar in 8 days. In addition, it was the 1st day in 6 days that failed to make a new all-time high. This is a loss of momentum in its breakout above 2500.

While most of the reports over the past 2 years led to mostly trading range trading, today’s report has a higher probability of leading to a trend. This is because the Emini has broken above the all-time high and the 2500 Big Round Number. Since both are major resistance, there is an increased chance of a big bear reversal or a failed breakout and reversal down. If there is a bull breakout, it could be very big and last several hours, or even a few days, before it reverses.

Prior to the report, today will probably continue the price action of the past several days. Therefore, the Emini will most likely be sideways.

The Emini is up 1/2 point in the Globex session. Furthermore, it has been in a narrow range overnight, just as it has been for over a week. While there might be a breakout up or down before the report, it is more likely that traders will wait until after the report. In addition, the quiet trading over the past 2 weeks will probably chance after the report. The Emini will probably once again have 2 – 3 hours swings over the next several days. Traders will therefore switch back to looking for swing trades. 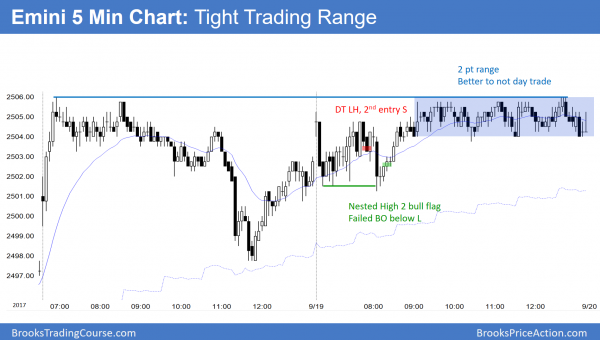 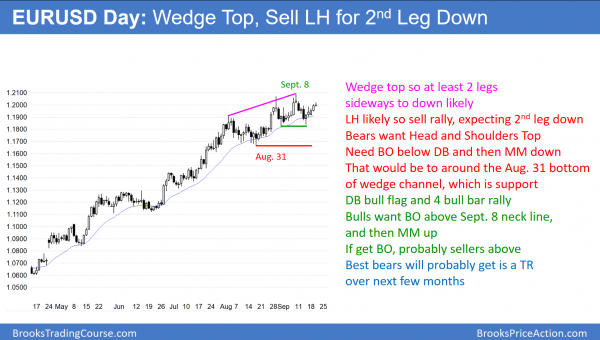 The EURUSD chart rallied for 4 days from a higher low in a bull channel. Yet, there is a wedge and a head and shoulders top. The bears want at least a 2nd leg down.

The EURUSD daily chart has 4 consecutive bull bars after last week’s higher low. While this reduces the chances for a 2nd leg down from the wedge top, the odds still favor that 2nd leg down. Also, since the bears have been making money by selling above prior highs for 7 weeks, they will probably sell above the September 8 high. Therefore, if the bulls get above that high, there is a 60% chance that the breakout will fail. Hence, the bulls only have a 40% chance of a measured move up without a swing down to the bottom of the developing trading range first.

The breakout would then be a failed breakout above a wedge top. The odds would still favor at least two legs and 10 bars down. Hence, this 7 week wedge bull channel is probably the early stare of a trading range.

Since the rally on the daily chart is above the midpoint of last week’s selloff, it is at resistance. In addition, today’s 11 a.m. FOMC announcement is unusually important. Therefore, today will probably trade in a small range before the report. The 5 minute chart has been in a 25 pip range overnight.

While sometimes there is a strong breakout before the report, that is unusual. A small trading range is much more likely. However, because the report is unusually important, it will probably lead to a big move up or down. This is especially true since the daily and weekly charts are climactic and at resistance. 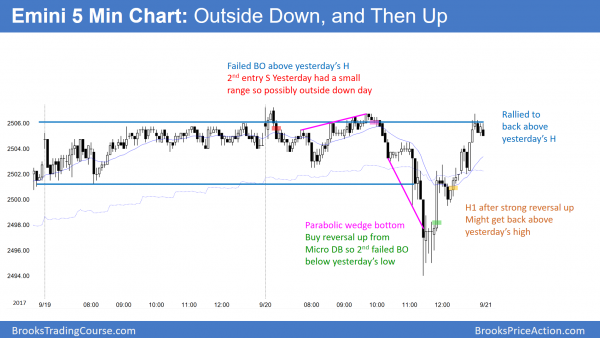 The Emini sold off on the FOMC announcement. However, it reversed up strongly and closed back around yesterday’s high. The daily chart has a parabolic wedge rally. Today’s high formed a micro double top with Monday’s high. However, reversals after parabolic wedge tops usually begin with a tight trading range that is sloped slightly down. This is therefore what is most likely over the next week.

After about 10 days of a tight trading range, the bulls try to break above what they see as a bull flag. If successful, the breakout usually reverses back down after 5 – 10 bars (days).

The bears try to get a bear break below the 10 bar bull flag. If they get it, that is usually the start of a swing down.