The bears got follow-through selling, but the bulls are trying to create a major trend reversal. After the big sell climax on the 2nd and 3rd bars of the day occurring 100 bars into a bear trend, and after yesterday’s gap bars, the odds favor an early low of the day and a rally or trading range lasting at least a couple of hours.

At the moment, the Emini is trying to reverse to Always In Long for sideways to up for at least a couple of hours. Most bears will wait for at least 10 bars and 2 legs sideways to up before looking to sell again. Because there is not yet a strong bottom, the bear channel can continue indefinitely, but the sell climax makes most bears hesitant to sell until after a rally.

The bulls need a strong reversal up or a series of consecutive bull bars. Until then, the bears are still in control, but the odds favor a rally starting within the 1st 2 hours.

My thoughts before the open: Learn how to trade a spike and channel bottom

The 60 minute chart of the Emini is oversold, but there is no clear bottom yet. Since the candlestick pattern is a bear spike and channel, the odds are that it will breakout above the bull channel today or tomorrow and have a couple of legs sideways to up. So far, the Emini is still within the trading range on the 60 minute chart, and therefore this is still a bear leg in a trading range. The odds favor a bull leg soon, unless the bears are able to get a strong bear breakout. There are two events this month that could be the trigger for a big bear breakout and the start of a 10 – 20% correction. The first is next week’s FOMC meeting. Next is the Supreme Court’s ruling on Obamacare. If they strike it down, there might be a perception that the Emperor has no clothes…the sentiment might be that the president is so weak that the U.S. effectively has no one running the country. Many other events could signal the start of the correction, but these are two obvious ones that come soon.

After an early selloff on the 5 minute chart last night in the Globex session, there was a small reversal up over the past couple of hours. The day session had a series of moving average gap bars (lows above the moving average) yesterday and those are a sign that the bulls are getting stronger. They usually lead to the final bear leg before there is an attempt at a major trend reversal. The day trading tip of the day for online daytraders is to watch for a major trend reversal and then a rally lasting at least a couple of hours and having at least a couple of legs. If there is a good bottom, this could provide good day trading for beginners.

Since the Emini is trying to bottom and the odds favor a reversal up today or tomorrow, day traders should be aware that the opposite can happen. Instead of a bottom, there can be a strong bear breakout that leads to a measured move down. If it happens, it is important to not deny the price action, and look for candlestick setups that could lead to swing trading down. 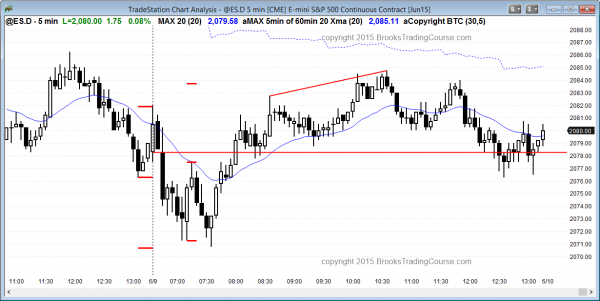 The Emini had some follow-through selling on the open, and then reversed up from an expanding triangle bottom. It tested the open late in the day, and closed near there, forming a doji day.

The Emini was likely to reverse up early today since it was oversold in a 60 minute trading range, and at support on the 60 minute chart. The bulls are hoping that the swing down in the 2nd half of the day becomes a large higher low major trend reversal. The bears hope that the developing trading range becomes a bear flag for trend resumption down. The downside is probably limited for the next several days because the Emini is oversold and it probably will want to be more neutral going into next week’s FOMC meeting.

Overnight, traders learning how to trade the markets can see that the Euro was weak and the Yen and Canadian were strong. The dollar was slightly weak, but stronger than the Euro.

The EURUSD 5 minute chart had a wedge top yesterday, but now has consecutive sell climaxes in the European session. Last week’s rally on the 60 minute chart was strong enough so that the odds favor a test up once this 5 minute correction ends. There is support from prior highs and a low around 1.1200, so that area is a magnet and a reversal up might occur there. The first reversal up will probably be sold today. Traders learning how to trade Forex for a living should look to sell rallies until there is a base.

The EURUSD is in a tight bear channel on the 5 minute chart and the best the bulls will probably get today is a trading range. It might begin to form since the selloff last night is forming a wedge bottom.

The USDJPY has pulled back to the bottom of the trading range of the past two weeks and should enter a trading range today for its Forex price action. Traders will be Forex scalping in both directions today.

The USDCAD fell below the trading range of the past 2 weeks, and the selloff last night was steep. However, a failed breakout is more likely than a successful one, so the odds are that it will go sideways today. The momentum down was strong enough last night that there might be one more leg down today.