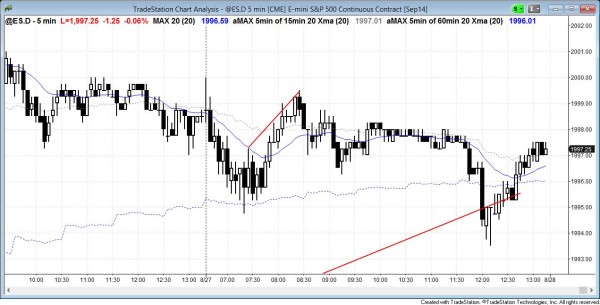 The S&P500 Emini was in a trading range today for online day traders, and it might get drawn down to test the July high by Friday’s close.

The Emini today did what it has been doing for weeks, and spent most of the day in a tight trading range. There were many bars that were only 1 tick high, and the 60 min chart had 4 consecutive inside bars. This is intense balance and created a breakout mode setup. The bear breakout had a couple of legs down, but there were no consecutive big bear trend bars. That made the selloff likely to be part of a trading range instead of a bear trend. The Emini reversed up from the bull trend line (the bottom of the tight 60 min bull channel) and the 60 minute moving average.

Friday is the last day of the month, and the month is currently an outside up bar (the current close is above last month’s candle). The Emini traded below July’s low and then above its high, and it is still above that high. The bulls want August to close above that high, and the bears want the opposite. The Emini is close enough to that support level so that it will be a magnet at the end of the week. The Emini might not be able to escape its magnetic pull until next week. The price action is so overbought that the odds favor a pullback to the July high this week, and a deeper pullback over the next few months, even if the Emini trades above the August high.

September is the weakest month for stocks and bonds, and with the Emini so overbought going into September, the odds of a pullback are probably a little higher.

Time of update 8:12 a.m. PST.
The S&P500 Emini has had quiet trading range price action for day traders all day, but is currently always in long and it might rally to a measured move up. However, since it is so overbought and there have been 3 consecutive doji bars on the daily chart, the Emini probably will be again mostly in a trading range today and might close near the open. Unless there is a strong breakout up or down, traders will probably look to buy low, sell high, and scalp.

If it sells off over the next hour, bulls will look for a higher low major trend reversal and a second leg up. As long as it stays below the low of the open, bears will short because they see the Emini as being in a broad bear channel.

The Emini sold off to the 60 minute moving average on the open, but each bear bar was followed by a bull bar. This price action occurs more often in a trading range than in a bear trend. The Emini tried to reverse up there, which is also a leg 1 = leg 2 measured move down from yesterday’s high, but the base was a tight trading range, which is not a strong setup for a stop entry or a swing trade. This 60 min moving average opening trend reversal was a possible low of the day.

The bulls reversed the Emini up to the bear trend line, but the rally was weak. The Emini had a weak sell off and a weak rally, and has had 3 consecutive doji bars on the daily chart. This makes a trading range day likely today. The Emini might break to a new high of the day. However, even if it rallies for a measured move from the low to the open of the day, the open of the day will remain a magnet all day and the Emini might get back to it at the end of the day. If so, this would be the fourth consecutive doji candle on the daily chart.

The price action on the 5 minute S&P500 Emini chart has been very uniform for several weeks. Most days have had a brief rally, but spent most of the day in a tight trading range. This type of price action offers few opportunities to online day traders, unless they are willing to enter with limit orders, scale in, and scalp, which most traders should not do.

The Emini is in an exceptionally tight bull channel, and because this has lasted for so long (several weeks), it is now climactic. Exhaustive climaxes sometimes end with one final huge, but brief bull breakout before reversing. This means that the buy climax top might come as a 20 – 40 point rally over two days. More likely, the Emini will begin to go sideways for several days and then either begin an endless pullback (drift down for 10 – 20 days) or it will have a bear breakout and then two or three small legs down to form a wedge bull flag. This could be the final bull flag before the Emini enters a trading range.

On the S&P500 Emini daily chart, the stock market broke above the July all-time high, but the past three days have been dojis. Also, the daily chart is in a tight channel, which is a breakout on a higher time frame (the weekly chart). When exceptional strength like this occurs late in a trend, it is more likely to be an exhaustive climax than the start of a new strong leg up. However, there is no top yet and this climax could go much further before getting a TBTL reversal (ten bars and two legs down is a common minimum objective after a climax).

When a channel is tight like this, the first reversal down usually does not go far. The Emini usually has to create some selling pressure in the form of bear bodies before a pullback begins. This limits the downside over the next several days. Sometimes there will instead be a strong bear breakout, and the correction will begin without first transitioning into a small trading range.

There is still nothing new to report beyond what I wrote over the weekend about the price action on the weekly and monthly candle charts. The stock market is waiting for Friday’s close, which will complete the candle on the monthly chart. The key price is the July high. The bulls want Friday’s close to be above it,and the bears want the close below it.