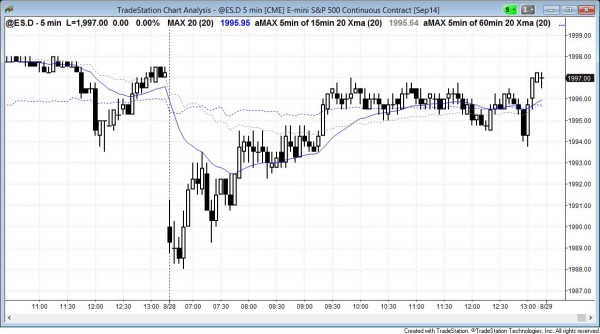 The S&P500 Emini gapped down on the daily chart, forming a 3 day island top. It then had a bull trend reversal up, turning the island top into a failed top. Day traders saw the price action as that of a broad bull channel.

When the Emini broke above the high of the first hour, it triggered a 60 minute moving average gap bar buy for day traders. The stock market continued in a broad bull channel up to yesterday’s close, but then entered a very tight trading range until the final hour. The Emini closed on its high and formed a buy signal bar on the daily chart. This last push up might form a 60 minute major trend reversal top.

A gap bar in a strong trend usually leads to the final leg before a major trend reversal forms. That top then has a minimum objective of TBTL (ten bars, two legs) sideways to down. Since the pattern is on the 60 minute chart, the correction, if it comes, will probably last at least 10 hours, or a day and a half.

Tomorrow is the last day of the month and the bulls want tomorrow’s close to be above the July high. The market is still close enough to that high to get there tomorrow, but August 30 through September 5 has a bullish seasonal bias, and this weakens the bear case.

Time of update 8:01 a.m. PST.
The dominant price action feature of the open was the bull trend reversal up after the gap down. However, follow-through has been weak and this increases the chances of a trading range. At the moment, the Emini is in a broad bull channel, but it needs to get back above the 60 minute moving average.

The bear day traders will try to form a wedge top and keep the market from getting too far above the July high. There is enough buying pressure so that the bears will need to create either a strong bear breakout or some selling pressure, and then a top, like a wedge top. Otherwise, the bulls will remain in control.

Since there is so much two-sided trading, bulls will buy pullbacks and take profits at new highs, and the bears might scale into shorts above prior highs, and then scalp. This is how day traders trade bull channels. Beginners should focus on the buy setups as long as the Emini is always in long.

The S&P500 Emini gapped down and formed a 3 day island top on the daily chart. Online day traders saw this as significant. The bulls wanted a quick reversal back above yesterday’s low, and the bears wanted the gap to stay open. Since the Emini is so overbought on all time frames, a gap down could be the start of a correction on all time frames. Even though the probability is small, especially on the weekly and monthly charts, the reward is so much bigger than the risk that some bears will short.

This is the first 60 minute bar in this rally where the high is below the moving average. It is therefore a 60 minute moving average gap bar. The first gap bar in a strong bull trend is usually bought, and there is then usually a rally that tests the bull high. However, that rally is usually the final leg of the bull trend and it often creates a major trend reversal. After the reversal, the Emini tries to have TBTL (Ten Bars, Two Legs) sideways to down, which usually results in a big trading range. Since this is happening on the 60 minute chart, the range could be 20 to 50 points tall. Once the trading range has formed, the bulls will try for a trend resumption up, and the bears will try for a trend reversal down.

The S&P500 Emini daily chart is at the top of a 3 week long, very tight bull channel, after breaking above the July all-time high. This much buying pressure is extremely bullish price action. However, when it occurs late in a trend, especially when the Emini is near the top of the weekly channel, online day traders begin to think of it as more likely being an exhaustive buy climax rather than a bull breakout. A breakout typically has at least one more leg up after a pullback, and the rally usually reaches another resistance level, like a measured move target. A buy climax does not. Instead, it usually falls for at least TBTL…Ten Bars and Two legs.

Tomorrow is the last day of the month, and the candle on the Emini monthly chart is currently an outside up bar. Since last month’s high is within 5 – 10 points of today’s price, the Emini could easily fall to that level by tomorrow’s close.

The bulls want any pullback to the July high of 1985.75 to be simply a breakout test. They want the Emini to reverse sharply up from that support. Bull traders want the close of August to be above the high of July, which would create a gap between those two prices. A gap is any space between a support and a resistance level. Traders would see that as a sign that the bulls were still in control, and that gap might lead to a measured move up. The bears want Friday’s close to be below the July high, which might be an early sign that the bull breakout is failing.