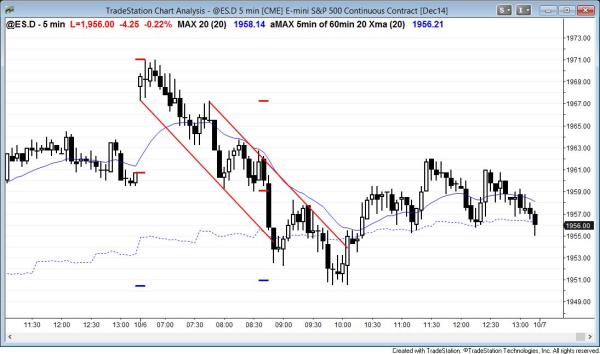 The Emini sold off from above yesterday’s high and reversed up at a measured move down from today’s high to yesterday’s close. Day traders bought the lower low major trend reversal.

The Emini traded up for two legs to test yesterday’s close, and then the Emini entered a tight trading range. Even though the second leg up to 11:25 was strong, the odds favored a trading range after a big selloff. A second leg up often is strong like this, but the lacks follow-through, unlike on a trend day where traders buy a pullback and look for a third or fourth leg up.

The Emini had a bear trend channel after a gap up on the open and a brief tight trading range. The tight trading range might be a sign that today will have mostly trading range price action, especially since the stock market is late in a 5 minute bull channel. The breakout above yesterday’s high failed and the Emini entered a bear microchannel. However, it failed to keep gaps open on the way down. This increases the chances that the selloff will become a bear leg in a trading range. Also, the channel up is tight enough so that the downside will probably be limited because 60 minute traders will buy, hoping for a higher low major trend reversal.

At the moment, day traders see the Emini as always in short. The selling is strong enough so that the first rally will probably be sold and it will create a lower high major trend reversal. However, because the 60 minute reversal up was so strong, today will probably not become a big bear trend day. Instead, it probably will have a lot of trading range price action after the 2nd leg down on the 5 minute chart. Less likely, it will be a strong bear trend day. After the 9 bar bear microchannel, a bull trend day is unlikely.

The reversal up last week was so strong that the Emini will likely have a 2nd leg up after any pullback. The 60 minute chart probably will pull back to around the moving average or the 1950 breakout point area and then try to form a lower high major trend reversal. However, just like the upside breakout of the 4 month trading range failed in mid-September and the downside breakout failed last week, the odds of a successful upside breakout on this leg up are also small. Because the monthly chart is so overbought, the odds favor more sideways to down until the Emini tests the monthly moving average.