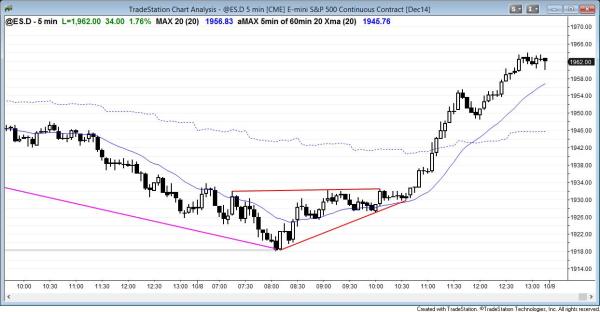 The Emini had early follow-through selling and then the expected strong bull reversal. Today was a huge bull trend day.

The Emini was in a trading range for the first hour and then had a downside breakout. It then formed a double bottom with last week’s low and reversed up sharply. Double bottoms are rarely perfect, and today’s low was 1 tick below last week’s low. The bottom was also at two trend channel lines and therefore the reversal up was after a failed breakout below a bear channel (most bear breakouts below bear channels fail).

Strong bear trends, like the one that formed yesterday, usually transition into trading ranges. When the selling lasts many bars, the rally usually lasts for at least 2 legs and 20 bars. The bulls look for a higher low major trend reversal within the trading range and at least a second leg up. The bears look for a double top within the range. They short for a breakout below the range and a measured move down. However, the bull trend reversal was strong enough so that the bulls maintained control for the rest of today. There was a triangle going into the FOMC minutes at 11 a.m., and then a strong bull breakout for a measured move up. The day was an outside up day with an exceptionally strong rally. There will probably be follow-through buying tomorrow, whether or not if there is a pullback first. The 60 minute chart has had w strong legs down and up. It might be forming a triangle over the past 2 weeks.

The Emini had a trading range open after yesterday’s bear trend. The bears want a bear breakout and a measured move down. The bulls want a major trend reversal and two legs up. Until there is a strong breakout up or down, the trading range will continue. However, the odds favor a rally lasting at least a couple of hours at some point today. It might be part of a trading range or the start of a new 5 minute bull trend.

Bull day traders will look for a strong signal bar or a strong reversal up above the moving average with follow-through. Bears need a strong breakout with follow-through. Since the 5 minute chart is so oversold, the odds of much more down without at least a couple of hours of sideways trading are small. If the market enters a trading range, it will be in breakout mode. The bulls will look for a major trend reversal within the range, and the bears will look for trend resumption down and a measured move down.

The market has been in a trading range for 4 months and it has had many strong trend days up and down. As a general rule, when there is a strong trend day in one direction, it should be thought of as a flag in the opposite direction. Yesterday was a strong bear trend day and it was in a bear channel. A bear channel is a bull flag. About 70% of the time, the next day will have at least one rally in the first half of the day that lasts about 20 bars. Sometimes, however, there is follow-through selling for an hour or two, like what occurred on October 2.

The Emini gave back most of its bull reversal from last week. The bulls are still hoping for a 60 minute higher low major trend reversal. The bears want a bear breakout below the double top of the past week, and then measured move down.

Even if the bulls get their second leg up, the odds still favor a move below 1900 because the monthly chart is so overbought. Also, the Emini has been in a four month trading range, and trading ranges tend to break below the low before ultimately breaking to the upside, if there is to be an upside breakout. It is best to assume that all trading range breakouts will fail and lead to reversals until there is a clear, strong breakout with follow-through. The trading range has gone on for four months and the bears have been in control for several weeks. However, until they can create a strong breakout with follow-through, traders should assume that breakouts up and down will probably fail. Fast money traders trading the 60 minute chart are still buying low, selling high, and taking quick profits of small swing trades.