The Emini opened with tight trading range price action, which is breakout mode and a limit order market. Traders had to be patient. The magnet above was yesterday’s high. The magnets below were the moving average, the bottom of the final channel up at the end of yesterday at around 1966, the close of last week, and the bull trend line.

Day traders wait for a strong breakout with follow-through in either direction before they will hold for a swing trade. Until then, the only way to make money is the scalp with limit orders, and most traders will lose money if they try to do this. There will be a breakout up or down. If it is strong, traders will trade in its direction. If it is weak, they will look to enter on a reversal. There will be a swing trade, but day traders need to be patient. This trading range open increases the chances that there will be a lot of trading range price action today.

The Emini is Always In Long and above the moving average, but the tight trading range means that the probability is really only 50% for the bulls and bears. Day traders need a breakout.

The Emini broke above a 60 minute double bottom yesterday and gapped up to form a 3 day island bottom. Both are signs of buying pressure and are usually followed by higher prices. However, the selloff on the daily chart was so strong that the odds are that this strong rally is a Big Down, Big Up sell climax, which means that the market is confused and balanced. When that is the case a trading range is likely to follow. Also, the big breakout below the monthly moving average occurred in a big bull trend. The odds are that the monthly chart will also be sideways a few bars. A few bars is a few months, to the Emini might be in a trading range for September and October.

The daily chart is still in a bear trend as long as the reversal up stays below the top of the bear leg, which is around 2100. This means that as strong as this rally is, the best the bulls will probably is a minor reversal up in a trading range. However, if the rally continues up strongly enough, traders will begin to see it as a higher low resumption of the bull trend, even before it gets above 2100. Until then, it is still in a bear trend. The bear trend is not likely to fall far because the monthly chart is so bullish. However, the selling was so strong that traders will probably need to see a test down and a reversal up before believing that the bulls have regained control. That would be a major trend reversal up.

The 60 minute chart is getting overbought and the rally is back to around 50% of the selloff. Also, today is Friday so weekly support and resistance can be magnets, especially at the end of the day. The nearest target is last week’s close of 1970.25. Monday is the last day of the month and monthly targets will be important. The most important one is the monthly moving average, which is around 1940. So, even though the reversal up has been strong, there are magnets below for today and Monday. If this rally is a resumption of the bull trend, and I think it is not, they bull should be able to keep the Emini from falling back to the magnets today and Monday as a sign that they are in control. If the bears succeed, then the odds of a bull leg in a trading range increase a little.

Yesterday’s breakout above the island bottom was strong enough to make a 2nd leg up likely. However, the rally at the end of yesterday might be that 2nd leg, and it was a a third leg up in a possible 5 minute expanding triangle top. The Emini has been in a pullback overnight and is down around 16 points. That means it is near last week’s close, which is a weekly magnet. If the bears are able to get the market to trade back down into the gap between 1968 and 1950.75, that would be another sign that the bulls are not very strong, and it again would increase the odds that the rally is a bull leg in a trading range, or a bear rally.

In addition to a 5 minute expanding triangle top on the 5 minute chart, a rally above yesterday’s high will create a potential wedge bear flag on the 60 minute chart. There are several choices for the 1st push up and different computers will use different ones. However, if the wedge bear flag sets up and then reverses down, the selloff will probably be in at least a couple of legs and it will probably last at least a couple of days. The bulls instead want strong follow-through buying today, but I think the odds are against it. If this is a big trading range on the daily chart, and I think it is, the odds favor disappointing follow-through after every strong leg up and down. Remember, the bears were disappointed earlier this week.

A weak channel is usually a leg within what will become a trading range. The Forex markets were in weak channels on the 5 minute chart overnight, except for the USDCAD, which has been in a tight bull channel for a couple of hours.

The daily chart of the USDCAD is in a tight bull channel after breaking below and then above a 3 month trading range. A trading range late in a bull trend is often the final flag before a pullback and the formation of a bigger range. The rally over the past two months has been broad and it has had 3 pushes up. Usually if a market tries to do something 3 times and fails, it then tries to do the opposite. That is the idea behind a wedge reversal. Although this channel is not getting tighter, like a typical wedge, it has 3 pushes and that is usually enough to get it to behave like a wedge. There is no reversal yet. However, when one comes, a guide for what to expect is TBTL (Ten Bars, Two Legs) sideways to down to test the bottom of the wedge. This is around 1.2880, and it is also the top of the January to March trading range.

The overnight rally is still below the August high. If it fails, it will form a lower high major trend reversal. Traders learning how to trade the markets might recognize this as a head and shoulders top candlestick pattern. While most head and shoulders tops are simply bull flags and are followed by a resumption of the bull trend, about 40% lead to a reversal down and a swing trade down. Since the daily chart is overbought and also looking like it is trying to form a top, those who trade Forex markets for a living will be watching for a top on the 60 minute and daily charts over the next several days.

The EURUSD chart has been in a pullback from last week’s rally, and the pullback now has lasted 4 days. This is extreme, and the selling is probably exhausted. The market has been in a trading range for about a day. The bulls are looking for a reversal back up to test last week’s high and the bears are hoping that this trading range has a bear breakout and leads to a break below last week’s low. The candlestick pattern is a tight trading range over the past 20 bars, and that can happen only if the odds for the bulls and bears are equal. The 60 minute chart is in breakout mode, and daytraders are scalping, but are ready for a Forex swing trade in either direction once the breakout begins. 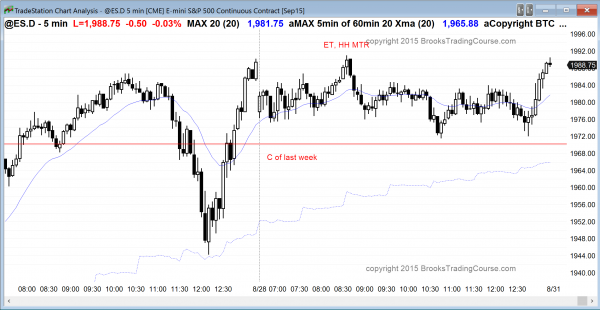 The Emini was in a tight trading range with very few reasonable stop entries. It was a limit order market. After an expanding triangle top (higher high major trend reversal), it tested the close of last week twice and rallied into the close.

The Emini was in a small tight trading range all day. This is a bull flag on the 60 minute chart, and the Emini tends to rally from August 30 through September 5. However, Monday is the last day of the month, and after big swings down and up, the market might try to be neutral as the monthly bar closes. If so, it might close back down at the monthly moving average, or to within about 10 points of it, which is around 1940.