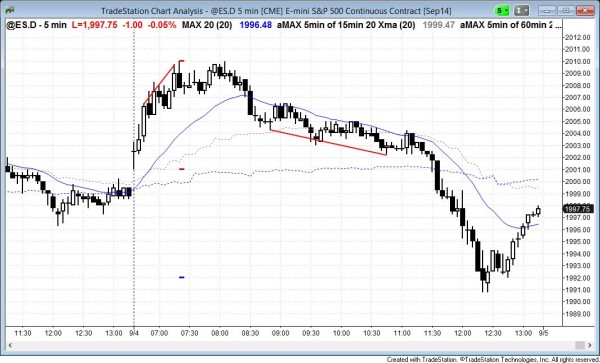 The S&P500 Emini rallied strongly on the open to a new high, but like all of the new highs over the past two weeks, there were enough sellers to turn the stock market back down. The rally was just a buy vacuum test of resistance (the new high and the top of the channel). The day became an outside day.

The S&P500 Emini rallied strongly on the open to another new high in the 7 day broad bull channel. However, like all prior new highs in the channel, the rally found day traders who wanted to sell above the most recent new high in the bull channel. The Emini then sold off to below yesterday’s low and formed an outside candle on the daily chart. This is a bearish event, given how overbought the stock market is on all time frames. However, the Emini closed back above yesterday’s low and turned the day into a doji candle. The bear body is good for the bears, but they need a strong bear breakout before traders believe that the bull trend is beginning to correct. Otherwise, the tight trading range of the past eight days will continue.

The Emini has also rallied 4 days above the bear breakout below the tight July bull channel. When a tight bull channel occurs late in a bull trend, it is often a sign of exhaustion and can lead to a deep pullback. After the first breakout below the tight channel or microchannel, the stock market often rallies for a few days, like it has, and then corrects down. Traders will be looking for a sell setup over the next few days.

The Emini is having a difficult time holding above 2,000 and above prior highs. This is a sign that the bulls are less interested in buying up here. The Emini might have to trade down to find a price where the bulls will be again willing to buy.

Time of update 7:54 a.m. PST.
The Emini had a strong bull trend on the open, but the rally might be simply a buy vacuum test of yesterday’s high, leading to a double top. However, it is still in a bull trend, although it has been in a trading range for an hour. It might continue in a trading range for a long time. If so, the bulls will look for a bull breakout and trend resumption up. The bears will try to create a major trend reversal and then get a bear breakout and measured move down.

Whenever there is a strong rally to resistance, traders have to be aware of the possibility of an endless pullback where there is a tight bear channel that just keeps growing. If that happens, there is usually a bear breakout after about 20 – 30 bars because the bulls usually finally give up. That bear breakout usually leads to about a measured move down. Even if the stock market falls below the open, the odds are that the day would end up as a doji day instead of a bear trend day because the early rally went very far above the open.

The Emini yesterday formed a bear trend candle. Since the Emini is trying to break out above the July high and above 2,000, a bear candle is a sell signal bar. However, the bar is within a seven bar tight trading range, which is a low probability environment for entering positions with stops. Most breakout attempts up and down fail and the tight trading range tends to continue. The context is good for the bears, as I have discussed in the weekly update, but until there is a strong bear breakout, the probability of a profitable short using a stop entry is low.