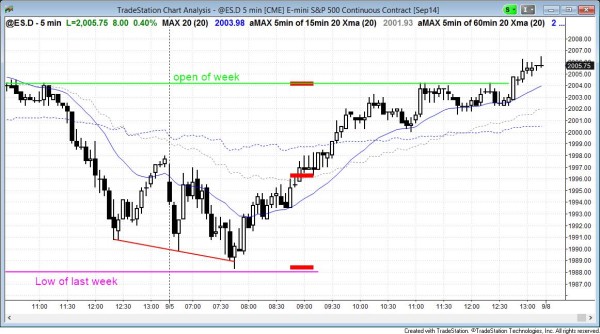 After yesterday’s sell climax, the Emini reversed up strongly from a wedge bottom that formed just above last week’s low.

The Wedge bottom was followed by a strong rally that tested a measured move up, and the Emini closed above the open of the week. The open of the week and last week’s high (5 ticks lower) were magnets that pulled the Emini up all day. Once the Emini reached the targets, it entered a trading range, as expected, but continued to find support at the moving average and the day closed at its high.

The high is still below the all-time high, and this rally might be forming a 60 minute lower high major trend reversal. The trading range might continue for weeks because of the potential for a weekly higher high major trend reversal. The monthly chart is so extremely overbought that the upside is probably limited until after a pullback, possibly down again to the 1900 area. However overbought the Emini is, it is still in a strong bull trend with no sign of a top yet. Because of the context, a short might come soon.

Time of update 7:22 a.m. PST.
The Emini had consecutive sell climaxes yesterday, which are usually followed by a big trading range day, lasting at least 20 bars and having at least two legs up. The strong rally into yesterday’s close was enough to make day traders look for an early major trend reversal buy setup today, which they got on the third bar when the Emini reversed up strongly from below yesterday’s low.

The bears want any rally to become part of a broad bear channel. They will try to take control over the market in the final hour to establish strong selling pressure. This will make bulls more likely to want to sell out of their longs next week, and it will make bears more confident about selling as the market goes down instead of waiting to sell rallies.

If there is a strong breakout up or down, traders will switch into trend style trading. Until then, they will continue to not trust breakouts in either direction and will instead look for reversals to scalp.

The Emini might have a strong bull trend day today, but it will more likely enter a big trading range. At the end of the day, traders will look at support and resistance on the daily and weekly charts, which will be magnets. The bulls want a bull candle on the day, and the bears want a bear candle.

Today is a Friday and its close affects the weekly chart. The bears also want the week to close below last week’s low to create an outside down candle on the weekly chart. This would be a strong sign of selling pressure and it could be the start of a leg back down to 1900. The bulls always want the opposite.

Yesterday was a big doji in an 8 day tight trading range, so the odds favor another sideways day.