Yesterday was a Micro Double Top on the daily chart and therefore a sell signal bar for a failed breakout above the 3 month trading range. Yet, it had a bull body, which lowers the probability for bears selling below yesterday’s low.

While the Emini is currently Always In Long, there is still no breakout up or down. This is still a Limit Order Market. Until there is a strong breakout up or down, traders will continue to mostly scalp with limit orders. This early trading range price action reduces the chances of a strong trend today. Without a strong breakout, the odds are that today will again be mostly a trading range day.

The Emini rallied to another new all-time high yesterday. Because of several targets around 2200, many bears might wait to sell. If the bears stop selling, the Emini could accelerate up in a buy vacuum to the resistance level. Yet, despite the strong rally, strong bears might suddenly appear once the Emini reaches a price where they want to sell. As a result, the Emini could have a climactic reversal down from the 2200 – 2220 area.

Because the Emini rallied strongly and then entered a tight trading range yesterday, it was in Breakout Mode. The bulls today will buy and try to create trend resumption up. The bears always see topping patterns and will sell, hoping for trend a reversal down. For example, there is an Expanding Triangle Top on the 60 minute chart.

Weekly magnets are important on Friday

Today is Friday and therefore traders will pay attention to weekly support and resistance. So far, the weekly chart has 3 consecutive doji bars. As a result, this week’s open is a magnet, especially at the end of the day While it is possible that today could be a big trend day up or down and change the current doji bar to a trend bar, the odds are against it. Bulls have been buying less aggressively at new highs. Bears so far have been willing to aggressively sell.

The Emini traded in a tight trading range overnight. Hence, it did not change the price action. The odds still favor an August correction, but the rally still is likely to test around 2200 first. 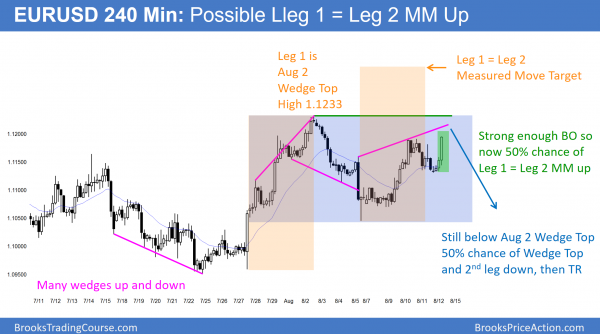 Th 240 minute EURUSD Forex chart rallied strongly enough over the past hour to give the bulls a 50% chance of a Leg 1 = Leg 2 Measured Move up above the August 2 Wedge top. Yet, there is still a 50% chance that the 5 day rally is just a pullback from the 1st leg down from the August 2 Wedge Top. If so, the bears will get a 2nd leg down. The result would be a big trading range, which usually follows a big Wedge Top, like the one that ended on August 2. The 5 day rally might be forming a wedge top. The EURUSD has created many wedge reversals lately. Hence the odds that this rally is just another one are higher than usually.

While the EURUSD rallied early yesterday, it reversed down in the middle of the day. The August 2 Wedge Top is still controlling the price action. Because of the Wedge Top, the odds favored 2 legs sideways to down at the end of yesterday. While August 5 was clearly a 2nd leg down, it was in a tight bear channel. That made it likely that it was just the 2nd half of a complex 1st leg down. Hence, the rally since then might simply be the pullback from that 1st leg down. Therefore, bears are selling the rally, expecting another leg down.

Whenever there is a Spike and Channel Bull Trend, like the one that ended on August 2, traders expect a trading range. Since the wedge bull channel was big, the trading range will probably be big. The two legs down to August 5 do not look big enough. As a result, the rally at the end of yesterday was probably just a bull leg in the developing trading range.

The EURUSD Forex market rallied strongly over the past hour. As a result, the odds of a big Leg 1 = Leg 2 Measured Move up are 50%. This target is well above the August 2 Wedge Top high. A rally there would end the influence of that Wedge Top on the 240 minute chart.

Yet, the current rally is forming another Wedge Top. If this rally stalls around or below the August 2 high, it would then simply be the pullback from the selloff down to August 5. In addition, it would create Double Top with the August 2 high. The bears would therefore then expect a 2nd leg down to at least 50% down toward that August 5 low. That would turn the entire chart into a big trading range. Furthermore, it would end the influence of the August 5 rally. As a result, the new pattern in control would be the trading range. The EURUSD Forex chart would once again be in breakout mode. 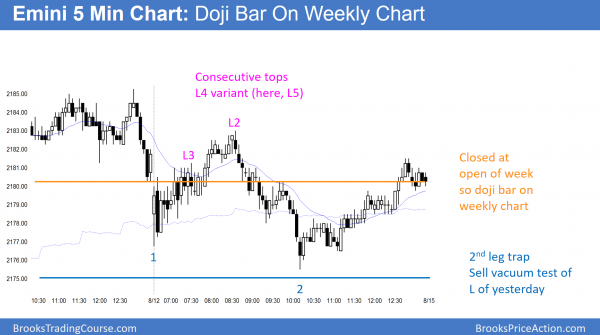 Today was a quiet trading range day in a bull trend on the daily chart. There are still targets above around 2,200. The odds are that the Emini will continue up to those target, but then reverse down for several weeks.