The day began with a doji at yesterday’s high. This increases the chances that today might continue yesterday’s trading range. In addition, since yesterday was a small day, there is an increased chance of an outside down day.

Whether or not today goes sideways to down, the odds are the Emini will work higher over the next few days after Tuesday’s strong bull reversal. Consequently, if today is a bear today, it probably will not be a strong bear trend day. More likely, today will be another mostly sideways day.

The bulls want a rally back up to Tuesday’s high. Even if they are successful, the odds still favor some hesitation there because of yesterday’s big gap down. It means that the bears are probably strong enough to prevent an immediate resumption of Tuesday’s bull trend.

At the moment, the Emini is Always In Short. It might form an outside down day. However, the odds are that it would simply be a 2nd leg down from Tuesday’s high. Consequently, the bulls will probably buy again tomorrow for a test up to Tuesday’s high. The strong selloff on the open and yesterday’s big gap down lower the odds for a strong bull day.

Most likely, today will be another mostly sideways day. Therefore it will probably have a swing lasting 2 -3 hours and then an opposite swing. The bulls want an Opening Reversal up from the moving average. This would mean that the 1st swing was up. The bears want a failed breakout above yesterday’s high, which would lead to an initial swing down. While the odds slightly favor an initial swing down, the odds still favor a trading range day.

After Tuesday’s big bull trend day, yesterday was a small trading range day. That is therefore disappointing for the bulls on the daily chart. Hence, it increases the chances that the current rally is more likely a bull leg in a bear channel than a breakout above a bull flag. The key price is the August 16 major lower high. This is because a strong break above will likely lead to a new all-time high.

The end of August through September 5 is seasonally bullish. In addition, Tuesday’s rally was strong enough for a test back up. Finally, the August 16 high is a magnet. Consequently, the odds favor at least a small rally from here before the bears sell aggressively again. However, the Emini might have to go sideways for a day or two more before the bull recover from yesterday’s big gap down.

The Emini is up 5 points in the Globex market. Since Tuesday’s bull reversal was strong and the buy setup was good on the daily chart, the odds favor at least a small 2nd leg up to Tuesday’s high over the next several days. The Emini also has a bullish tendency at the end of August through September 5.

Because yesterday was a doji bar on the daily chart, it is a weak buy signal bar. Consequently, the Emini might have to go sideways for another day or two before testing Tuesday’s high. 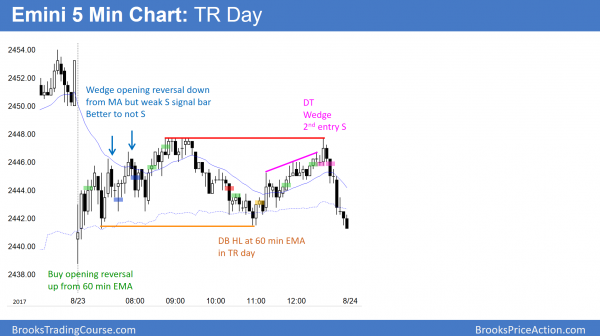 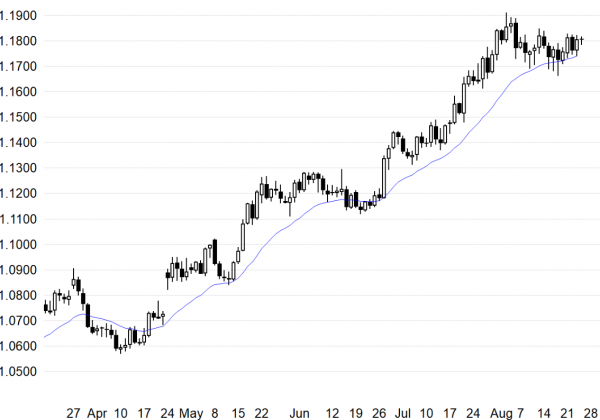 The EURUSD daily Forex chart keeps reversing up from its 20 day exponential moving average. Yesterday was another good buy signal bar. Since this bull flag is the 1st test of the EMA in over 20 bars, it is a bull flag. Because the bears continue to fail and now the bulls continue to create good bull bars, the odds favor a new high.

When there is a buy climax, like the August 2 parabolic wedge top, the EURUSD market usually has to go sideways to down for about 10 days and a couple legs. It has done that. Bulls take profits and reduce their position size, and then wait to see if the bears will create a deep pullback or a reversal. The bulls are now concluding that the bears probably cannot.

Since the bears can see this as well, the bears will probably buy back their shorts and look to sell higher. In addition, the bulls will buy, hoping for a strong breakout to a new high. If they get their breakout, they can tighten their stop to below the bottom of this month-long bull flag. Consequently, they will have less risk.

Yesterday was another strong bull day that reversed up from the EMA. It addition, it was a pullback from Monday’s break above a High 2 bull flag at the EMA. It is therefore a good buy signal bar and the context is good for the bulls. If the EURUSD today trades above yesterday’s high, it will trigger the buy signal. The bulls need a strong entry bar to convince traders that the bull trend has resumed. At the moment, the odds favor a breakout above the August 2 high. However, a trading range late in a bull trend often is the final bull flag. Therefore the bulls will probably take profits above the August high and the bears will sell again there.

Bear breakout below the bull flag?

There is always a bear case. The bears want a break below the bull flag and a measured move down to the July 26 low as their 1st target. They need a big bear bar closing strongly below the August 17 low to convince traders that they have taken control.

The 5 minute chart has been in a 35 pip range overnight. Since yesterday was a good buy signal bar and today is just below yesterday’s high, the odds favor a break above yesterday’s high. Because yesterday is a buy signal bar for a 20 gap bar buy setup (1st pullback to the moving average in at least 20 days), today could be a strong bull trend day. However, since the daily chart has been in a tight trading range, if there is a breakout today, it probably will be small. Consequently, a weak bull trend day or a mostly trading range day is likely today. But, if the market decides that this is a buy setup, the EURUSD should rally to test the August 2 high over the next couple of weeks. 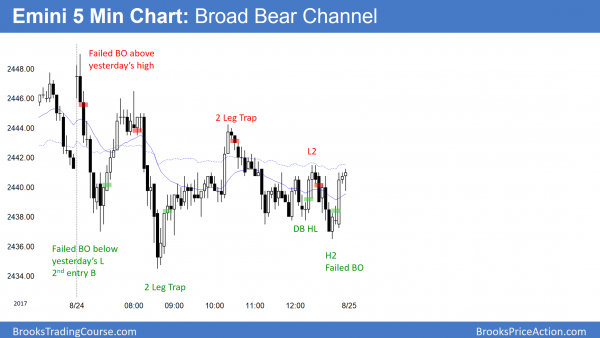 The Emini had 2nd leg traps up and down and formed a trading range day. It also traded above yesterday’s high and then below yesterday’s low. It was therefore an outside down day

Today was the 2nd pullback day from Tuesday’s rally. The odds favor at test back up to Tuesday’s high. However, it is likely that a 150 point correction is underway. Therefore, the bears can get a strong bear breakout at any time.