While today reversed up from below yesterday’s low, there is still room to the bottom of the 60 minute wedge bull flag. Hence, the bulls need a strong rally to break free of that magnet. If they do not get it, the odds are that the initial rally will reverse down to a new low to test the bottom of the wedge bear channel.

So far, the rally has consecutive bull bars, but lacks big bull bars. In addition, it has not broken strongly above the moving average and yesterday’s lower high. Consequently, the rally is still a leg in a bear channel and in a trading range. Hence, the odds still favor at least one more new low.

Because there is support at the bottom of the 60 minute wedge and most days have been trading range days, the odds are against a strong trend day up or down. However, this initial rally will probably be followed by a swing down by the end of the 2nd hour, and maybe within the first 30 minutes

The Emini is still in its 2 month trading range. It therefore will probably continue to have lots of trading range days. While Tuesday was a buy signal bar on the daily chart, the bulls yesterday failed to get above Tuesday’s high. Furthermore, the bears triggered a sell signal on the weekly chart this week. They had a micro double top after an extreme buy climax, and therefore expect a test down to support.

Since the weekly moving average is their next logical support, that is their 1st target. Because the Emini never tested the December close, the selloff will probably fall to below the December close. In addition, that would be a pullback below Dow 20,000. Since the monthly chart is in a strong bull trend, the bulls will probably buy the 5% correction for a test of the all-time high.

Because the daily chart is in a bull trend, the bulls might get one more new high. However, the odds are against much higher prices until after the weekly chart falls below its moving average. I discussed this in last weekend’s blog.

Last day of the week

Although today is Thursday, it is the last trading day of the week. It therefore affects the appearance of the weekly chart. Hence, weekly support and resistance are important. This is especially true in the final hour. Because this week is the entry bar for a micro double top on the weekly chart, the bears want a close below last week’s low. In addition, they want the week to close on its low. The bulls want the opposite. In addition, they would like the week to close on its high.

Yesterday was a bear inside day in an early bear trend. It is therefore a sell signal bar on the daily chart. Hence, if today trades below yesterday’s low, that breakout would trigger the sell signal. Yet, the Emini is in a 2 month trading range. Hence, failed breakouts are more common. Consequently, it is more likely that there will be buyers below yesterday’s low and the trading range will continue.

The bulls will see a breakout below Tuesday’s low as the 3rd push down in a wedge bull flag on the 240 minute chart. They expect a reversal up. The bears want the bear channel to accelerate down. In addition, they especially want it to break below the March 27 neck line of the double top on the daily chart.

While the odds favor the bear breakout, the Emini is in a 2 month trading range. Therefore the odds that any particular leg down will be the one that becomes a successful breakout are small. Hence, the odds favor another reversal up over the next week or two. Yet, the daily chart is probably in the early stages of a 5% correction. Therefore swing bears will sell rallies and bulls will probably only scalp. While it is not yet clear that the daily chart is in a bear trend, traders are beginning to suspect if it is. 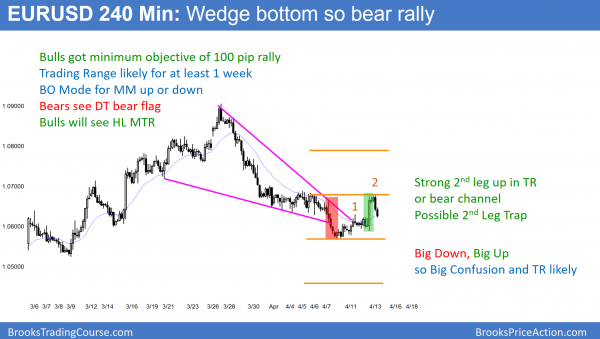 After a wedge bottom on the 240 minute chart, the EURUSD reached its minimum target of the top of last week’s tight trading range. Yet, it did so with a very strong rally after a 2 day bear flag. Since the chart has been trending down, that yesterday’s rally might be a 2nd leg trap. Consequently, the bears are hoping that it was simply a buy vacuum test of resistance. Hence, they want the bear trend to resume down from what they see as a double top bear flag.

Every trading range contains both a reasonable buy and sell setup. Consequently, the bears will see a double top bear flag. They therefore believe that last night’s selloff was the start of the bear breakout below the double top.

The bulls will see a major trend reversal. Hence, they see last night’s selloff as a pullback from yesterday’s strong rally. The probability of a breakout leading to a measured move up is the same as for a measured move down. 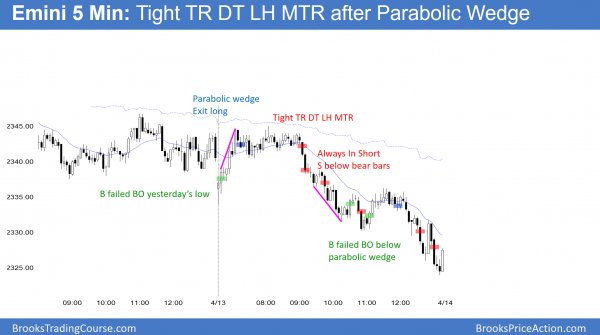 The Emini reversed down from a parabolic wedge top, and sold off all day.

Today was a bear trend day for most of the day. Yet, there is a nested wedge bottom above the March 27 low. The bulls bought the reversal up at the close. This increases the odds of a rally early next week. However, the odds are that the Emini will break below the March 27 neck line of the double top within a few weeks. Consequently, the Emini is probably in the early stages of a 5% correction.

If the Emini gaps down and has a big bear trend day on Monday, it could lead to a measured move down to the December close. While low probability, traders need to be ready for a huge bear day.