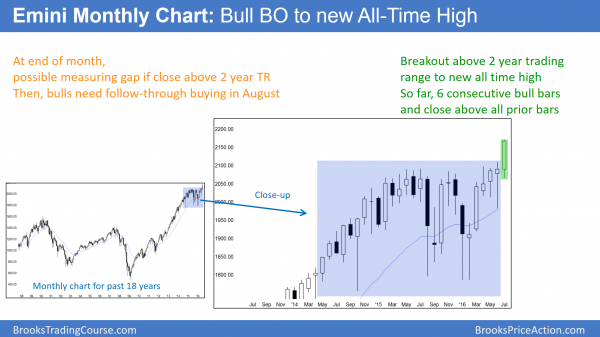 Some beginning traders erroneously think that there is a significant link between political conventions and the stock market. There is not. Like any news event, a convention might cause a one day move in the market. However, support and resistance on all time frames are far more important forces. Traders should not give the conventions any thought as they plan their trades.

The monthly S&P500 Emini futures candlestick chart has one week left in the month. This month is forming the 6th consecutive bull trend bar. Most noteworthy, the rally is a strong breakout to a new all-time high.

The importance of follow-through buying in August

Because this month is breaking out of a trading range, August is important. The bulls want to see another big bull trend bar. As a result, it would increase the chances that the breakout would lead to a 300 point measured move up. At a minimum, they do not want a bear bar in August.

The bears always want the opposite of the bulls. They do not mind this month being a big bull trend bar. Their concern now is also August. At a minimum, they need it to have a bear body because that would be an early sign of a possible failed breakout. Their ideal bar would be a big bear trend bar closing on its low and below the July low. While this is unlikely, it would mean that the July breakout was probably failing. The 2 year trading range would then be the Final Bull Flag in a 7 year bull trend.

Most likely, August will be somewhat disappointing to both the bulls and bears. The most common candlestick pattern that confuses and disappoints both is a doji. August will probably have a tail on top. If it is big and the month closes below its midpoint, the bar would be slightly better for the bears. If it is small and August closes above its midpoint, that would be slightly more bullish. 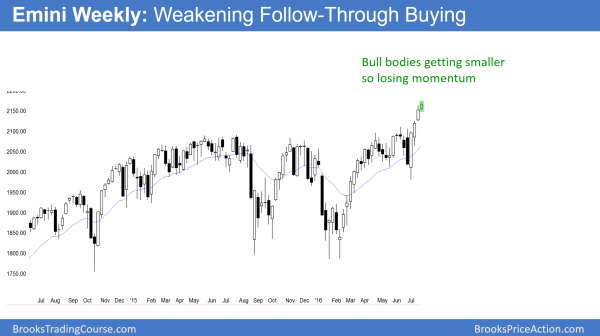 The weekly S&P500 Emini futures candlestick chart has had 4 consecutive bull trend bars. Yet, the bodies are getting smaller, which indicates a loss of momentum.

The weekly S&P500 Emini futures candlestick chart had a small bull bar for its candlestick pattern this week. This is weak follow-through after a strong breakout above a 2 year trading range over the past 2 weeks. Although the prior 3 weeks were strong bull trend bars (big bodies, closes near highs), the bodies have been shrinking. This represents waning momentum. It therefore is a sign that the Emini will probably pull back next week.

A pullback means that next week will trade below this week’s low. The bulls will probably buy the pullback. With the rally as strong as it has been, the odds are that the pullback will last 1 – 2 weeks and become a small bull flag. If so, bulls will buy above the high of the pullback bar, expecting at least one more week in the bull trend.

The bears want next week’s pullback to be a big bear trend bar closing on its low. Instead of just a pullback, they want the pullback to be so big that becomes a reversal. If they can make next week become a bear trend bar closing on its low, they would significantly increase the probability that the breakout will fail and reverse back into the 2 year trading range. While the odds are against this, it would change everyone’s expectation for the coming weeks. 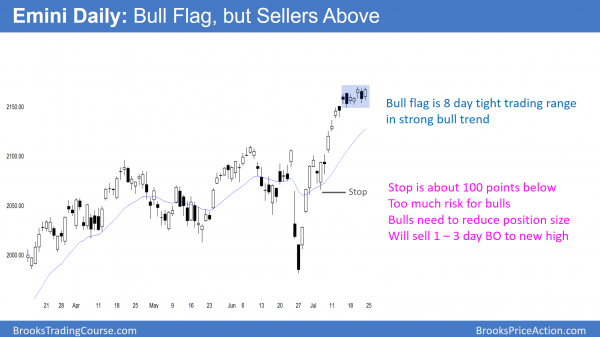 The daily S&P500 Emini futures candlestick chart is trying to resume up after a 7 day bull flag.

The daily S&P500 Emini futures candlestick chart has been in a trading range for 7 days. Last weekend, I said that this was likely to happen. The bulls see this pullback as a bull flag and they therefore expect trend resumption up next week.

Bulls have a wide stop

For the past couple of weeks, I have talked about the problem the bulls have with their protective stop. It is still below the July 6 low, which is about 100 points and 5% below. This is more risk than many institutions will allow. They have to reduce their position size to reduce their risk.

Their profit taking over the past 7 days has created the current pull back. The bulls now need a strong bull breakout to another all-time high. If they get it, they will then move their stop to just below the bull flag of the past 2 weeks. This will greatly reduce their risk.

If the bull trend resumes up, but not strongly, the bulls will assume that the rally is a bull leg in the ongoing pullback. They will not raise their stops from below the July 6 low. The bulls instead will use the rally to reduce their position size ever further. They need a strong bull breakout to believe that the bull trend has resumed. Only then will they tighten their stops, which will allow them to build their position back up.