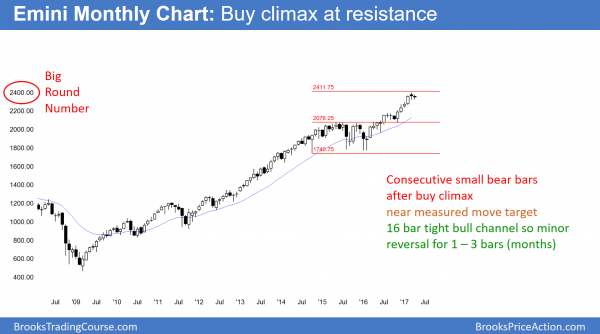 The monthly S&P500 Emini futures candlestick chart has consecutive doji bars after a buy climax. Furthermore, it is at a measured move target based on the 2014 – 2015 trading range. In addition, that trading range was late in a bull trend. Hence, it will probably be the final bull flag.

The monthly S&P500 Emini futures candlestick chart is currently subordinate in importance to the weekly chart. This is because the weekly chart has an unusual buy climax. It will therefore probably lead to a correction over the next 2 months.

Since the monthly chart is so climactic and at a major resistance level, the odds are against much higher prices for the rest of the year. Even if the Emini reaches 2,500 within a year or two, the odds are that it will be unable to escape the magnetic pull of the 2 year final flag. Consequently, the odds are that the Emini will test the 1,800 bottom of that final bull flag within a couple of years.

Weekly S&P500 Emini futures candlestick chart:
70% chance of a pullback below the moving average within 2 months 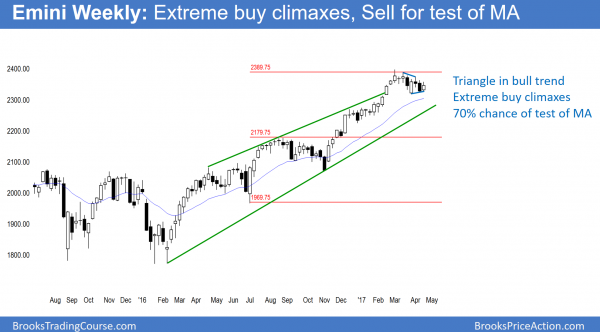 The weekly S&P500 Emini futures candlestick chart had a high 2 bull flag 2 weeks ago. The bulls therefore see this week as a pullback from the breakout above that bull flag. The bears see that breakout as a failure. They therefore see a small double top over the past 6 weeks. In addition, they see an extreme buy climax.

The weekly S&P500 Emini futures candlestick chart has an unusual and extreme buy climax. It has not touched the moving average in 23 weeks. This has only happened twice before during the 8 years of the current bull trend. In addition, there have many many instances when the market stayed above the moving average for 15 or more bars (weeks). Yet, in every case, the Emini fell below its moving average before going much higher. Consequently, the odds are 70% or more that the Emini will pull back to that average within the next couple of months.

Furthermore, most of the prior buy climaxes led to reversals that fell 50 or more points below the average. Since the average is currently around 2,300, the odds are that the Emini will fall below 2,250 before going much higher. When I look at the weekly chart, I think of a line from my favorite movie about trading. It is the 1983 Eddie Murphy comedy, Trading Places. Randolph Duke (Ralph Bellamy) is begging his brother (Don Ameche) to “Sell, Mortimer, sell!”

Since the Emini has not tested the close of last year, it is a magnet. Furthermore, since it is only about 20 points below the 2,250 target, the Emini probably will be unable to escape its magnetic pull. There is therefore about a 60% chance that the selloff will test last year’s close. In addition, that would result in the Dow falling back below 20,000.

Since the weekly chart is in a tight bull channel, even if it retraces 50% of the Trump election rally, the odds are that the reversal down will be minor. Consequently, bulls will buy the selloff. This is because they correctly believe that the selloff will more likely be a bull flag or a bear leg in a new trading range. In either case, the odds are that the Emini will rally back to test the old high.

However, if there is a strong selloff, the bears will look to sell at the prior high. This is because a reversal down after testing that high would create a major trend reversal setup. The bears would then have a 40% chance of a major reversal down. Yet, the risk would be small compared to their potential gain. Consequently, even a 40% chance of a swing down results in a strong Trader’s Equation.

Daily S&P500 Emini futures candlestick chart:
Maybe 1% up before 5% down so “Sell in May and go away” means 5 percent correction 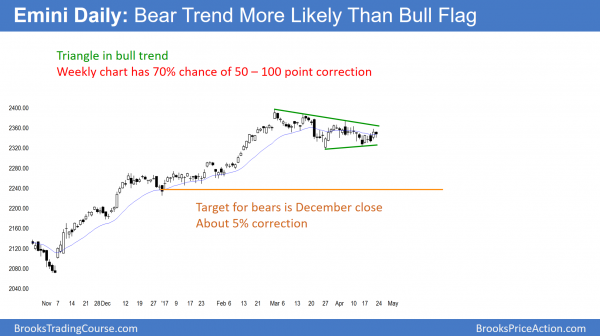 The daily S&P500 Emini futures candlestick chart is in a trading range. But, because the weekly chart will probably pullback to below 2,250, the daily chart is also in an early bear trend.

The daily S&P500 Emini futures candlestick chart will probably fall below last year’s close before going much above the old high. Think about that. The risk to the old high is about 50 points. Last year’s close is more than 100 points below. Hence, the odds are that the bears will make a reward that is twice their risk. This creates an unusually strong Trader’s Equation.

A trader rarely has a high probability of making a reward that is twice his risk. This is therefore one of those rare times. Hence, the current level is good for traders buying puts or put spreads. Since the selloff might take a couple of months to reach its targets, traders wanting to take this trade should buy June or July puts or put spreads.

Is it okay to wait? Yes, because the odds still are the the Emini will test up to the top of the 60 minute wedge bear channel before breaking below the March 27 low. If a trader wants smaller risk, he will wait for more of a rally and then buy puts.

If a trader wants higher probability, he will wait for a strong break below the March 27 bottom of the 2 month trading range. When buying puts in a falling market, it is better to buy put spreads. This is because there is often a sharp pullback back up after a breakout. Consequently, put buyers who enter late should either buy put spreads, or a small put position, looking to add on during a rally.