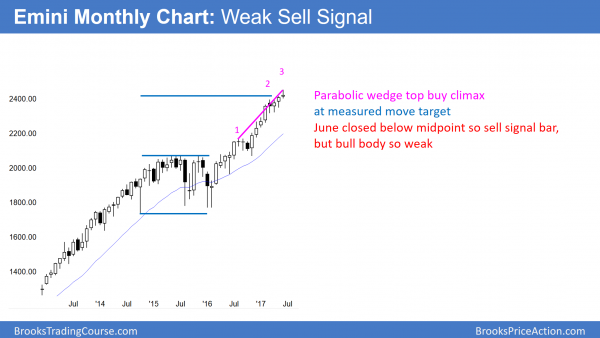 June is a sell signal bar on the monthly S&P500 Emini futures candlestick chart. The three pushes up in a tight bull channel is a parabolic wedge top. Because the channel is tight, the downside over the next few months is probably small.

The monthly S&P500 Emini futures candlestick chart has a 2 month breakout above the April high. At the end of April, I said that April was a buy signal bar. But, I said that it was a doji bar, and therefore weak. In addition, I said that it followed a 4 bar buy climax. Furthermore, when the Emini was testing I wrote that it would probably fall to 2300 before rallying to 2500. Although the Emini’s rally to 2450 was more than I expected, I still think it will fall to around 2300 before reaching 2500. However, since it went so high, it might not quite reach 2300 on the 1st reversal down.

Finally, I mentioned that the rally was at a measured move up from the 2014 – 2015 trading range. Hence, it was at important resistance. I concluded by saying that the breakout above a High 1 bull flag after a buy climax and at resistance usually only lasts 1 – 3 bars. Furthermore, the market typically then pulls back for a few bars.

June is the 2nd month of the breakout. The odds are that either the pullback will begin in July or August. Yet, the 18 month bull trend has been in a tight bull channel. In fact, there has been no pullback in 8 months and this is therefore an 8 bar bull micro channel. As a result, it is strong. Hence, the 1st reversal down will probably be minor. Therefore the downside risk over the next few months is small and probably limited to 100 – 150 points. While that would be a bear trend on the daily chart, it would be a pullback on the monthly chart.

Because the 18 month tight channel has had 3 pushes up, it is a parabolic wedge top. Therefore, there is a 20% chance of an Endless Pullback. If the bears get a 10 – 20 bar endless pullback, there would then be a 40% chance a reversal down to the 2014 – 2015 final bull flag. The odds are that the Emini will test to the 1,800 bottom of that flag at some point in the next few years. Yet, the odds of the current parabolic wedge top being the start of the reversal are small at the moment.

However, if the Emini monthly chart pulls back in a tight bear channel for 10 or more bars, that would be an Endless Pullback. If the bears then got a pair of big bear bars breaking below that bear channel, then the odds would shift in favor of the bears. Hence, the Emini would probably test the 1,800 area without 1st testing this month’s all-time high.

I want to be clear about this being a low probability event at the moment. However, that is how a parabolic wedge top can lead to a reversal. 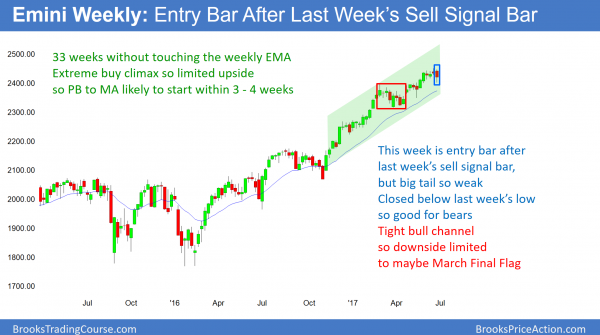 The weekly S&P500 Emini futures candlestick chart has been above its weekly exponential moving average for 33 weeks. Because this is so extreme, the odds are that it will go sideways to down to the average over the next 2 months. It should also test the May 18 low around 2350.

The weekly S&P500 Emini futures candlestick chart is in its most extreme buy climax in its 18 year history. While climaxes can extend much longer than what seems logical, this one is already at a historic size. Therefore, a regression to the mean is likely. Hence, the odds are that it has begun its pullback to the weekly moving average.

It can get there by going sideways or down. Because this is so extremely overbought, the odds favor that it goes down at least a little. An obvious target is the May 18 major higher low. Since that is around 2350, that would be a 100 point pullback.

The trading range in March and April is probably the final bull flag in the 18 month rally. When there is a final flag, its low is a magnet. Therefore the Emini might test the 2300 – 2320 area before the bulls will be willing to buy again.

If this selloff falls back to the flag, it will be strong enough to make traders wonder if the rally up from there might fail. Traders will watch that rally to see if it forms a lower high major trend reversal. That would also be a head and shoulders top. If that happens and there is a decent sell signal bar, there would be a 40% chance of a 2nd leg down. At that point, traders would begin to look for a test of the bottom of the monthly final flag at around 1,800.

Because the rally on the weekly and monthly charts has been strong, it is more likely that any pullback over the next few months will lead to a rally to a new all-time high. Yet, whenever the bears are able to control the market for a few months, traders become less confident in the bull trend. Consequently, they will then begin to consider the possibility of a bigger correction. 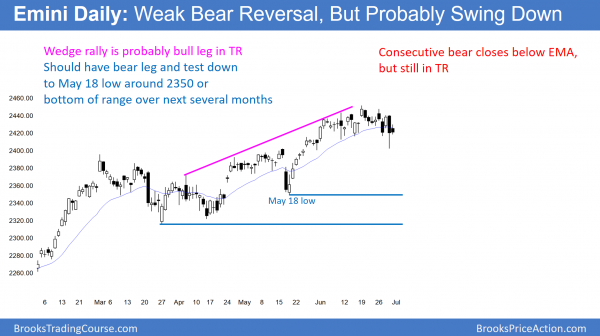 While the bulls might get one more minor new high, the odds are that the bears will begin a swing down soon. Since a swing means at least 20 bars, the reversal will probably last at least a month. Because the targets on the weekly chart are more than 100 points below, the reversal might need a few months to reach them. Consequently, the odds favor a 2 – 3 month pullback beginning soon.