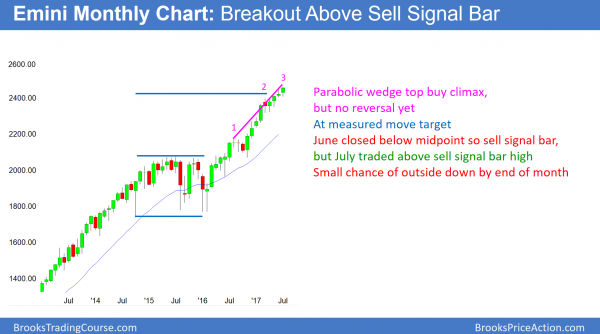 The monthly S&P500 Emini futures candlestick chart has 4 consecutive bull trend bars in a tight 18 month bull channel. Yet, this is the 3rd leg up. Therefore, this is a parabolic wedge rally. However, there is no reversal yet.

The monthly S&P500 Emini futures candlestick chart is in a strong 7 year bull trend. In addition, it has been especially strong for 18 months. Because this 18 month rally is in a tight channel and has 3 legs, it is a parabolic wedge buy climax.

The bears need a trend reversal

However, the bears do not have a reversal yet. If this month reverses down in the final week and closes below the June low, July would be an outside down month. Since there is a parabolic wedge rally, this would increase the chances of a reversal down for several months.

If July closes near its high, but August is a big bear month, that would be a 2 bar reversal. Hence, that, too, would be good for the bears.

There is no sign yet that either of these will occur. Consequently, the bulls will keep buying until they see a sign that the bears are strong. The odds favor at least slightly higher prices. The 2500 Big Round Number is a magnet. There are also measured move targets a little higher, and just below 2600.

Finally, because the bull channel is tight, it tells traders that the bulls are buying even tiny pullbacks. Consequently, if there is a reversal down, the bulls will probably buy a 1 – 3 bar (month) pullback.

Since traders know that there are buyers below, they are willing to buy now at the high. This is because they are confident that any selloff will be brief and the Emini will soon be back to their entry price. Hence, they believe that there is little risk of a loss. If instead the Emini does not pull back, they make money. 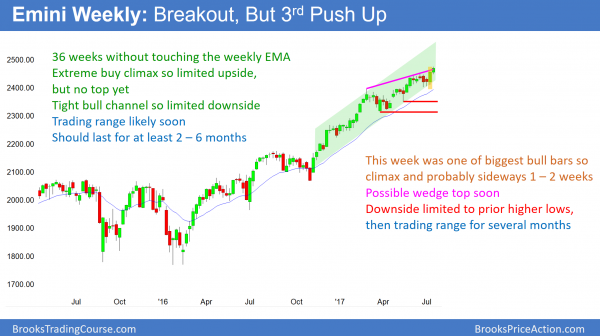 The weekly S&P500 Emini futures candlestick chart is in a strong bull trend. However, it has never been this far above the weekly moving average for 36 weeks in the 18 year history of the Emini. Hence, this is an extreme buy climax. Last week was a big bull bar late in a bull trend. It therefore is more likely to be a climactic temporary end of the move than the start of a stronger leg up.

The weekly S&P500 Emini futures candlestick chart is the most overbought that it has ever been in its 18 year history. While it held above its weekly moving average for 50 weeks in 2003, it got very close to the moving average twice in the middle of that stretch. The current rally has not gotten close even once. Hence, the buying is more climactic.

However, there is no top yet. In addition, climaxes can go much farther than what seems reasonable. Yet, the risk of a reversal down anytime soon is high.

How big would a stock market correction be?

This extreme buy climax therefore increases the odds of a pullback. When there is a reversal from a buy climax, the typical minimum reversal is TBTL Ten Bars, Two Legs sideways to down. Because the bull trend is in a tight bull channel, the odds are against a much bigger pullback. An obvious target is the April trading range, around 2350.

Ten bars is 10 weeks, which means 2 – 3 months. At that point, if the reversal down did not have a lot of momentum, the bulls will buy again. The odds are that the rally would test the prior high. 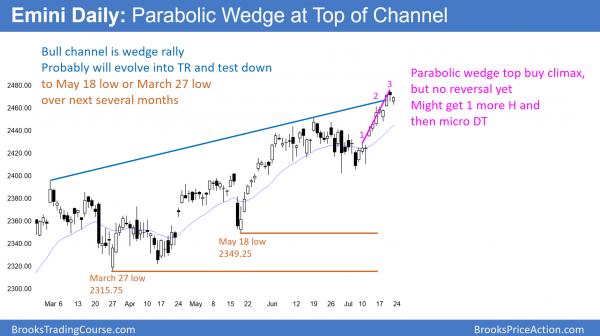 The daily S&P500 Emini futures candlestick chart has had 3 pushes up in a tight bull channel. This is therefore a parabolic wedge buy climax. The bears so far only have a one bar reversal. Friday is a buy signal bar and therefor the odds favor at least one more new high.

The daily S&P500 Emini futures candlestick chart is at the top of a 5 month bull channel. In addition, it has had at least 3 legs up in the channel. Hence, it is a type of wedge top. Furthermore, the 2 week tight bull channel has had 3 legs up. This is therefore a parabolic wedge rally.

Friday is a strong buy signal bar in a bull trend. The odds are that the Emini will trade above Friday’s high early next week and trigger the buy signal. Consequently, there will probably be at least one more new high. However, if there is then a reversal down after a 1 – 2 bar new high, that would be a micro double top.

The parabolic wedge top would still be valid. That reversal would therefore be more likely to lead to at least a minor reversal down to test Wednesday’s buy climax low. In addition, that would be a test of the gap.

Whenever there is a gap up late in a trend, especially in a buy climax, there is an increased risk of that gap being an exhaustion gap. If there is a strong reversal down, that gap might represent the end of the bull trend. Furthermore, if there is a gap down next week and it stays open by the close of the day, that would create an island top with Wednesday’s gap up.

While most island tops and bottoms (and all types of reversals) are minor, some can lead to a major reversal. Since the weekly chart is extremely overbought and there are parabolic wedge tops on both the monthly and daily charts, there is an increased risk of a 100 – 150 point correction at any time. The bears need a big bear bar closing on its low and then a follow-through bear bar, or a series of 3 or more smaller bear bars, before traders will believe that the bears have a chance of a correction.

By Friday trading below Thursday’s low, the bears triggered their sell signal. However, parabolic wedge tops rarely reverse into strong bear trends. They instead usually pull back and form a bull flag. Yet, if the bull flag grows to 10 or more bars, then the bears have a 40% chance of a bear breakout and a swing down.

This is exactly the same process that traders see on the monthly chart. Hence, this is a nested parabolic wedge top. Nested patterns have a slightly higher probability of being successful. Yet, until there is a reversal, the odds still favor higher prices.

FOMC meeting as an Emini catalyst

The Fed will announce its interest rate decision at 11 a.m. at the end of its FOMC meeting. Before a couple of years ago, FOMC announcements usually resulted in big moves. Hence, it was a strong catalyst. Lately, the moves have been small, and there has been a lot of trading range price action. This is therefore what is likely this time.