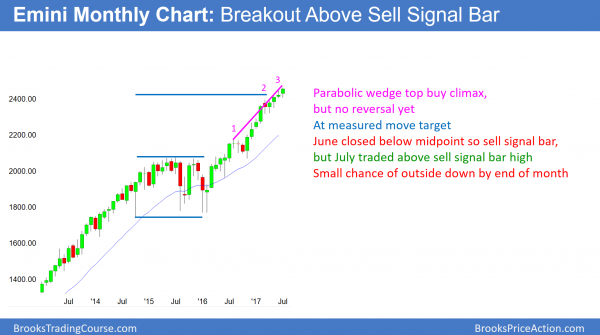 The monthly S&P500 Emini futures candlestick chart is in a parabolic wedge buy climax. Yet, the momentum up is strong enough to reach the next major resistance of the 2500 Big Round Number.

April was a High 1 buy signal bar. In addition, it followed a 4 month buy climax. Furthermore, it was at the resistance of a measured move up from the 2014 – 2015 trading range. A rally from a High 1 after a buy climax and at resistance usually lasts 1 – 3 months and then leads to a pullback for several bars (here, months). Since July is the 3rd month of the rally, the odds are that the Emini will begin to pull back for a few months in July or August.

June is a sell signal bar because it closed below its midpoint. While the bears are running out of time in July, they still can trigger the sell this month by trading below the June low. If the Emini trades down from above June’s high to below June’s low, July would be an outside down month. This would increase the chances of a 3 month pullback.

What about the bulls? How long can this rally last without a pullback? This 17 month rally is the strongest leg in the 7 year bull trend. The current rally is a 9 bar bull micro channel. This means that the low of every month is at or above the low of the prior month. When a bull trend becomes especially strong late, the strength is more likely climactic than the start of an even stronger leg up. Hence, it is more likely an exhaustion gap that a measuring gap. 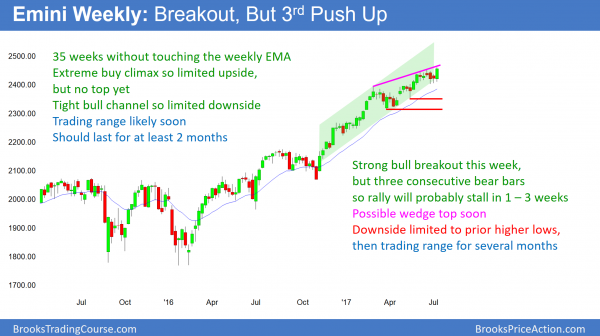 The weekly S&P500 Emini futures candlestick chart had a big bull trend bar this week. However, it followed 3 strong bear bars in a 6 week tight trading range. In addition, it has not touched its 20 week exponential moving average in 35 weeks. Because that is an unusually long buy climax, any rally from here will probably not last long.

The weekly S&P500 Emini futures candlestick chart has not touched its 20 week exponential moving average in 35 weeks. Therefore, this is the most exceptional buy climax in the 18 year history of the Emini. Hence, the rally is unlikely to continue without 1st pulling back to below the average price.

How many more weeks can the rally last? There is no theoretical limit. Yet, there is a practical one. Whenever a market deviates far from its normal behavior, it usually regresses back to the mean. This means that it usually soon begins to behave like it has done in the past. Consequently, betting that this rally will last much longer is a low probability bet.

As a result, all of the traders who have bought over the past 5 – 10 weeks know that they bought at a time when there is an increased risk of a deep pullback. Hence, if the Emini begins to pull back, these bulls will quickly sell out of their longs. The result can be a quick reversal down.

The weekly chart is in a strong bull trend. Therefore, the selloff will probably be minor. This means that it will more likely lead to a trading range than a bear trend. An obvious target for the bears is the April triangle. That means a 100 – 150 point pullback.

Since the selloff will probably simply be a leg in a trading range, it will probably last 2 – 3 months. The bulls will then probably buy again. However, after a 10 bar selloff, the bears will look to sell a rally back up to around the prior high, hoping for a major trend reversal. 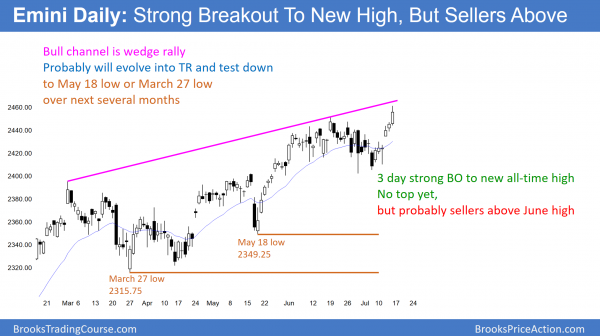 The daily S&P500 Emini futures candlestick chart gapped above a 3 week bear channel this week. In addition, the follow-through buying has been good enough to make at least a small 2nd leg up likely. As a result, the bulls will probably buy the 1st reversal down. For example, if the Emini sells off for a couple of days next week into Wednesday’s gap, the bulls will probably buy the selloff.

The bears will see any reversal down from around the June all-time high as a major trend reversal. However, the 3 day bull breakout was strong and the context is good for the bulls. Consequently, most bears will want at least a micro double top and a strong sell signal bar before they will be willing to sell for a swing trade.

The daily chart has rallied in a bull channel from the March low. This rally follows a pullback from a very strong rally in February. This is a Spike and Channel bull trend. February is the spike, or breakout. The rally from the March low is the channel.

From the Market Cycle, traders know that a breakout leads to a channel, which is a weaker trend. The channel has a bear breakout 75% of the time. It then evolves into a big trading range. The bottom of the range is usually around the bottom of the channel. This is the March low around 2320.

The bears, however, usually have a major trend reversal top. This is very different from the current attempt at a top, which would be minor. A top in a tight bull channel usually leads to a trading range. It is therefore minor. A top in a trading range can be major, and lead to an opposite trend, and not just a pullback. If the Emini goes sideways to down for a couple of months, it will form a trading range. The bears will therefore look to sell a rally up to around the old high, hoping for a major trend reversal.