The Emini gapped up to a new all-time high. The bulls wanted the gap to stay open and for today to be another Trend From the Open bull trend. Yet, Friday was a tight trading range and their breakouts usually do not go far. The 1st and 3rd bars of the day were dojis, which created a limit order market. This weakened the bull case.

The odds are that today will trade below yesterday’s tight trading range, even if it rallies for the 1st hour or two. This is because most trading range breakouts fail and today’s open was not strongly bullish.

While the Emini closed the gap and is Always In Short, there is still a chance that the selloff could form an Opening Reversal and early low of the day. There are still several targets around 2200, and the odds are that the Emini will get there this week.

If there is a strong breakout with follow-through, traders will change their minds and look for a trend day instead of mostly trading range trading. However, the odds favor mostly 2 sided trading and not a strong trend today.

While the Emini gapped up and rallied on Friday, the breakout might lead to a Final Flag reversal this week. The breakout was strong enough so that bulls will probably buy the 1st reversal. The bears will therefore wait for at least a micro double top before shorting. Yet, if the Emini trades down strongly for several days, traders will sell. They would therefore conclude that the bull breakout had failed. Hence, they would see the 3 week trading range was the Final Bull Flag.

The first target for the bulls is a measured move up based on the height of the 3 week trading range. Many computers will ignore Tuesday’s low for the measured move. Instead, they will use the bottom of the range that was in place before the bear breakout. Hence, the target is 2196.50. Because that is just below a big round number, the Emini would also probably test 2200 as well.

The Emini formed a double top on June 23 and July 1. The reversal up and the breakout above the double top was strong enough to create a reasonable measured move higher. The measured move target above that double top is around 2220. Hence that is the next target for the bulls. There is a 60% chance that the Emini will reach it in August.

Nested tops and an August correction

Because there has not been a significant pullback far more than 20 bars, a 40 – 60 point pullback will probably come this month. Also, the Emini has formed nested topping patterns this year. While they are technically 3 Expanding Triangles, the shape is not clear. I have called them Failed Breakouts below trading ranges. Please see my weekend update for more about this.

The rally has been so strong that there is a 40% chance that the August reversal, if it comes, could be climactic. Hence, the Emini might accelerate strongly up and then reverse down abruptly. This is instead of a much more common major trend reversal.

Because Friday rallied and then entered a tight trading range that lasted more than 20 bars, today is a Breakout Mode setup. The bulls want trend resumption up, while the bears want a trend reversal down. Since the breakout was strong and the context was good on the daily chart, the bulls have a higher probability.

A tight trading range late in a trend is often the Final Flag. A tight trading range is a strong magnet and most breakouts fail. While Friday’s breakout was strong and the bulls will probably get at least a small 2nd leg up, the magnetic pull of the trading range is also strong. This increases the risk that the a bull breakout will fail within a few hours. Yet, this is the 5 minute chart. The daily chart still should test close to 2200 this week, even if the 5 minute chart pulls back first.

While the Emini rallied to another high overnight, the rally was weak. Furthermore, the pullback over the past 4 hours retraced most of it. The Emini is still in a bull trend and likely to go at least a little higher. Yet, it will probably top out for at least several weeks at some point this month. 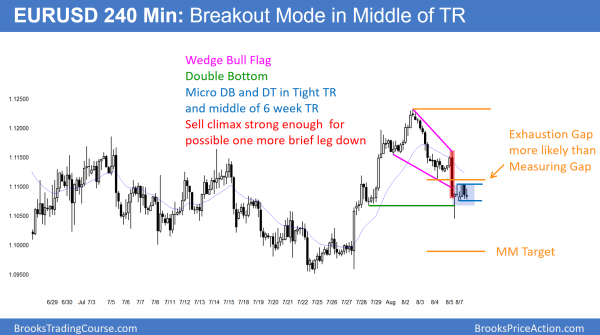 The EURUSD 240 minute Forex chart has a Micro Double Top and Micro Double Bottom over the past 2 days. Traders are deciding whether the big bear breakout last week is a Measuring Gap or an Exhaustion Gap. It was a strong enough breakout so that a 2nd leg down is likely. Yet the small selloff overnight might be that 2nd leg. It doesn not have to fall below Friday’s sell climax low.

Because the sell climax was exceptionally big and it formed late in a bear trend, it will more likely be an exhaustive end of the August bear trend that started on August 2nd. However, the trend has been in a tight channel and it is still probably just the 1st of 2 legs sideways to down from the wedge top. Since trading ranges are resistant to change, the odds are that the EURUSD will continue in its 6 week and 2 year trading ranges. Furthermore, this leg down will probably end this week. Yet, the rally will then be a bull leg in the trading range that has been forming since the July 28 1st pullback in the wedge rally.

The 60 minute EURUSD Forex chart had a Spike and Wedge Bull Channel last week. While Friday was a 2nd leg down and it might have ended the pullback, the selloff on Friday was strong enough so that at least a test back down will probably come on Monday. Yet, there is still a 40% chance that Friday is actually a measuring gap instead of an exhaustion gap. Therefore, the selloff could continue to below the July 27 bottom of the bull reversal without first having a swing up.

When there is a clear Spike and Channel top like this, there is a 60% chance that the reversal down will be a bear leg in a trading range. Hence, it is typically followed by a swing up. The first target for the bulls is the 1.1161 top of Friday’s sell climax. Bulls will be looking for a bounce today or tomorrow. Since traders expect a trading range this week, day traders will be quick to take profits unless there is another strong breakout, like on Friday. 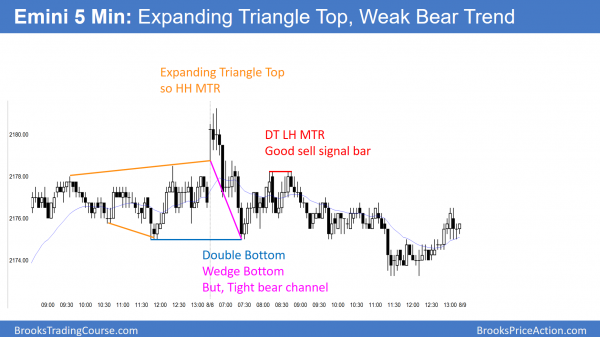 Because of the nested Final Flag and Expanding Triangle Tops, the probability is only 50% for the bulls, despite the bull trend on the weekly and monthly charts. Yet, the Black Swan trade is a strong bull breakout. Since most traders believe that the Emini has gone too far, most doubt it will go much further with out a pullback. That means a strong bull breakout could create a Black Swan rally. Hence, the Emini could quickly reach the 2400 measured move target without 1st pulling back. The odds of this are about 25%.