The Emini reversed up from below yesterday’s low and from 1 tick below the open of the month. Yet, because the 2 day selloff was in a tight bear channel, the odds are that this reversal up will be a bull leg in a trading range. While it is a Double Bottom with yesterday’s low, the pattern does not have enough bars for a reliable Major Trend Reversal. The bulls will either need a test down in 10 – 20 bars, or a relentless rally. Without that, a trading range is more likely.

Because the selloff has lasted 2 days, it has been extreme. There is a 75% chance of at least 2 hours of sideways to up trading that starts by the end of the 2nd hour. It might have already begun. There is only a 25% chance of a strong bear trend day today. If today will be a trend day, a bull trend is more likely because the Emini is at the bottom of it 3 week trading range. Furthermore, today’s bounce is a 2nd strong reversal up from this level. Yesterday’s late rally was the 1st. Hence there is good buying pressure at support.

After Monday’s sell climax, yesterday went sideways for the 1st half of the day. The bear trend resumed in the middle of the day. The bulls reversed the 2 day sell climax at the end of the day and prevented a breakout below the August range. This reduced the chances that today will be another bear day. The selloff has been strong enough to make a trading range today more likely for the 1st couple of hours than a bull trend.

While most reversals in a tight trading range have a low probability of success, this is one exception. July is a credible Final Bull Flag. Because it is, the current Double Top of the past 2 weeks has a 40% chance of leading to a TBTL correction (Ten Bars, Two Legs) on the daily chart. If the correction comes, the 2nd leg down is often unusually big and fast. Traders need to be ready for a bear breakout staring within a few days. That would be the 1st leg down. Then, there is usually a bounce that can last 5 – 10 bars. Finally, there is a brief, but big collapse. While there is a 60% chance of at least one more new high, 40% is too big to ignore. Be ready.

While the Emini has not fallen far, the context is important. The daily chart has a double top over the past 2 weeks just below major resistance. Furthermore, the Emini has not had a significant pullback since the June 27 low. Therefore many bulls have stops that are uncomfortably far below. These bulls will not let those stops get hit, and many are taking partial profits.

If there is enough profit taking, it will scare the momentum bulls. I wrote about them yesterday. Momentum bulls did a lot of the buying over the past 2 months. They bought simply because the market was going up. They did not care that it was expensive. By expensive, I mean that the daily chart is far above its moving averages. Therefore, bulls buying here are paying far above the average price.

How big a pullback?

When they decide that the Emini is not going higher and may even go lower, what will they do? For them, their premise would no longer be valid. If a bull is long and he decides that his reason to be long no longer exists, he sells. It would not take much for the momentum bulls to suddenly all sell out of their longs. One or 2 closes below the August or July trading ranges would probably be enough.

As a result of these weak bulls all rushing to sell, the Emini could sell off rapidly. Two percent corrections are common. When the buying has been as climactic as this has been, there is often a 5% correction. That is why I have been saying that there is a 60% chance of a 50 – 100 point correction before the market goes much above the 2220 resistance.

A 5% correction would fall below the 2100 top of the 2 year trading range. The pullback could reach the 2065.75 July 6 low. That was the 1st pullback after the strong reversal up. Hence it is a magnet.

While the Emini sold off for 2 days, it is still in the August tight trading range. Unless it closes far below, the odds still favor a new high and a test of the 2200 targets. Yet, the selling was strong enough to make it almost as likely that the bears will win. They just need a little more selling.

This is always the case at the bottom or top of a trading range. The breakout attempt always looks strong enough to make traders believe it will succeed. Yet, 80% of attempts fail. Until there is a breakout, there is no breakout. While the context and the past 2 days have been good for the bears, the bulls still have the edge.

While the Emini is down 4 points in the Globex session, it will probably be sideways today. The GDP comes out tomorrow and Yellen speaks. If there is a good report and she surprises everyone with her comments, that could lead to the start of a correction. Yet, the odds still favor one more new high, and the news could easily create a reversal up. Today will probably be quiet, but tomorrow could be a trend day. 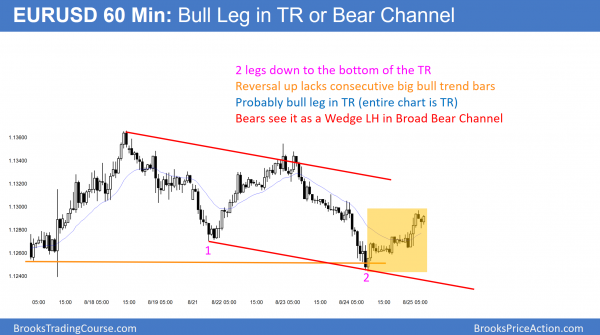 The 60 minute chart reversed up overnight from a big 2 legged correction. Yet, the reversal has been weak. Therefore, today will probably have mostly trading range price action.

While the EURUSD 60 minute Forex chart sold off yesterday, it stabilized at the bottom of the 6 day trading range. Furthermore, that is just above the August 2 breakout point. However, the 2 day selloff was in a tight bear channel. Hence, a trading range is more likely than a strong reversal back up.

Because the daily chart has been in a trading range for 6 months, the selloff will probably have to dip below that 1.1233 August 2 high. In trading ranges, Markets usually have to dip below support before they can reverse up. This means that many bulls will hesitate to buy until after that test below 1.1233. If there is a strong bull breakout, they will buy. Yet, that is a low probability event. Most will wait for a reversal up after testing below support.

For the past 7 days, I have been writing that the daily chart would be sideways, and it has been. The 60 minute chart has had 2 big legs down from the August 18 high. This is a bull flag. Furthermore, it is trying to reverse up from the bottom of the 7 day range. Yet, the reversal up so far lacks consecutive big bull trend bars. It therefore is more likely just another leg in the 7 day range. Traders might be waiting to hear from Yellen tomorrow. Because there is a 40% chance that the top for the next month in the stock market formed on Tuesday, the news tomorrow could lead to a big move up or down in all financial markets.

Since the overnight trading has been unremarkable and there is news tomorrow, today will probably be another trading range day. 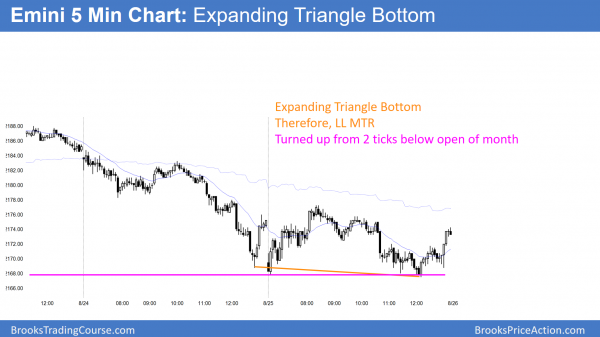 The monthly chart is deciding if August will be the 7th consecutive bull trend bar. The odds are against it. The open of the month will be an important magnet on Wednesday when the month closes. The bears want Wednesday’s close to be at least 1 tick below the open of the month so that August has a bear body. If the bulls get a 7th consecutive bull bar, there would be an 80% chance that September would have a bear body.

Tomorrow is Friday. The bears want the week to close below last week’s low. This week would therefore be an outside down week. Hence, it would be a sign of strength for the bears. Yellen speaks tomorrow, and her comments could lead to a sharp move up or down. More likely, the Emini will stay sideways until Tuesday or Wednesday. Hence, institutions appear to be waiting until the end of the month before deciding if the correction has begun.