The Emini ended with a small rally Friday. It formed a double top bear flag, and today’s open fell below yesterday’s low, which was the neckline of the bear flag. It fell for more than a measured move down, and it tested the September low, which is the bottom of the month long trading range.

When there is a breakout below a double top bear flag and then a measured move down, the odds are that there will soon be a swing up. Because the selloff was in a tight channel, the bulls will probably need at least a micro double bottom before the swing up begins. The selloff on the open was strong enough so that the first rally might only last for 5 – 10 bars and then test the day’s low. If so, the bulls will look for a reversal up from a major trend reversal.

The bears want a bear trend day. Today is Always In Short at the moment, and the September low of 1889.50 is within reach. Whether or not the Emini gets there or slightly below, the odds are that there will soon be at least a couple of hours of sideways to up trading. While it is possible that the 2nd leg down on the daily chart has begun, it is more likely that it has not, and that today’s selling is simply a sell vacuum test of the bottom of the trading range.

The odds are that there will be a reversal for at least a couple of hours. The selling has been so strong that a bull trend day is unlikely, at least for several hours. It is possible that the bulls can form a trading range and create some buying pressure, and then get a reversal day. A strong reversal up is unlikely for at least a couple of hours. A trading range is likely soon. bears will sell the 1st rally and bulls will buy the test down.

The Emini reversed up from the bottom of a month long trading range last week and from 6 days down, which is an oversold leg within the trading range. The candlestick pattern on both the 60 minute and daily charts was weak. The rally was also weak. Although it had 2 legs on the 60 minute chart, they were in a tight channel, and they did not have many bars compared to the number of bars in the wedge bottom on the 60 minute chart. This means that the 2 legs were more likely part of a complex first leg up, and there will then probably be a test down and then a clearer 2nd leg up. Also, the reversal up came from just above the September 1 low instead of forming a double bottom or a failed breakout below.

Since the Emini is at the bottom of a month long trading range, those who trade the markets for a living know that the bulls have a higher probability than the bears when the market is at the bottom of a trading range. This means that if the Emini falls below the September low this week, those who are learning how to trade the markets should begin to look for a strong bull candlestick pattern that would give them a long entry for a swing up. The swing might even test the top of the trading range.

The Emini is down about 11 points in the Globex market. The bulls are hoping that the overnight selloff is just a pullback from the 1st leg up from last week’s wedge bottom on the 60 minute chart. The bears want a failed wedge bottom and a bear breakout of the trading range. The probability favors the bulls. Online daytraders should watch for buy setups and an bull breakout today or tomorrow. Although there might instead be a bear breakout, the odds are that it will fail and reverse up. Online day traders should be ready for a rally this week, but there might be one more push down to below the September low first. This is especially true because there are only 3 days left to the month, and the low of the month is support, and therefore a magnet. With it so close, the Emini might have to test below it before the end of the month on Wednesday.

When a market is at the bottom of a trading range, the odds favor the bulls unless the bears get a strong breakout with follow-through. If they are successful, traders should simply accept it and sell for the swing down.

It is more likely that a bear breakout will fail and reverse and that the Emini will rally to test the top of the wedge bear channel. That top is around 1960. If it gets there and fails again, it could create a head and shoulders bear flag on the daily chart, and that could be a reasonable start to the move down to the bear low.

The major Forex markets were in trading ranges overnight. This means that day traders were mostly scalping, and many were entering with limit orders and scaling in. Their is almost always at least one swing trade for day traders every day in at least one of the markets. This is a trade lasting at least 40 – 50 pips. When a market is in a trading range, it is usually hard to catch the swing because by the time a market is clearly swinging, the move is usually at least half over. Traders are happy if they catch the swing, but they are more likely to enter on the first pullback and scalp out 10 – 20 pips on the 2nd leg.

As always, day traders will always be ready to swing trade if there is a big breakout with follow-through at any time. With the 60 minute charts in trading ranges, the swings on the 5 minute chart will probably not last more than a couple of days.

The major Forex crosses are also in tight trading ranges on the daily charts. This is a “dead money” situation, and it means that investors who are holding for trades lasting a month or more are not making a return on their investments. Their money is not moving and is “dead.” Some instead will switch to scalping on the daily charts, which means selling rallies and selling above bars near the top of the range and scaling in, and buying selloffs and buying below bars near the bottom of the range. Some will scale in as well. They always trade small enough to keep their risk within their comfort zone. They then scalp, taking quick profits on small reversals to around the middle of the range. 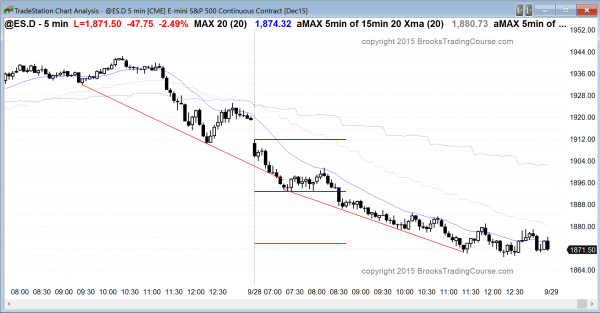 The Emini sold off in a small pullback bear trend from the open today.

The Emini had a big bear trend day, but it was in a tight channel. Although it might have follow-through selling for the 1st hour or two tomorrow, there is a 75% chance of at least 2 hours of sideways to up trading after whatever, early selling there is, if any. There is a 25% chance of another strong bear trend day.