The Emini had a strong bull bar on the open and then a trend from the open bull trend, but the follow-through after the 1st bar was bad. This increased the chances of a sideways to down pullback to get closer to the moving average. However, when there is a gap up and a rally, the rally often continues for 1 – 2 hours before it goes sideways to down to the moving average.

The bears need a top, like a major trend reversal. This means that they usually need a trading range of 10 – 20 bars to create enough selling pressure to convince traders that they can take control. Alternatively, they can create an endless pullback from the rally. If they are able to create a pullback that is in a tight bear channel and it lasts 20 or more bars, they then often are able to get a bear breakout and a bear trend.

At the moment, the Emini is Always In Long. Although the follow-through buying has been disappointing for the bulls, there is no top yet and the best the bears can probably get within the next hour or two is a trading range. Once the Emini gets close to the moving average, it then decides between trend resumption up and trend reversal down. So far, there is no reason to sell, and bulls are holding long. However, the odds favor a pullback that begins by the end of the 2nd hour because the buying has been weak.

My thoughts before the open: Intraday trading strategies when there is a gap up

In my weekend blog, I said that there would probably be a rally in the Emini early this week, because that has been the price action pattern of the past many months. In a trading range, selloffs last about 5 – 10 days and are followed by rallies that last about 5 – 10 days. Because the Emini is oversold on the daily chart, the price action trading strategy is to expect a rally. Since the Emini is in a tight trading range on all higher time frame candlestick charts, and traders learning how to trade online should expect reversals.

There are always lots of gap openings up and down when the daily chart is in a trading range, and all of the gaps usually eventually close. About 50% close on the day they form. Because the Emini is oversold, today’s gap up, if there is one, has a higher probability chance of staying open for more than a day. However, The Emini could sell off all day in a small bear trend and still keep the gap open.

With the probability favoring at least a couple of days up, the odds favor a bull trend today. Day traders are always ready for the opposite, but the day trading tip is to look for a rally, even if there is a swing down to the moving average for the 1st hour or two. If so, daytraders will look to buy a double bottom or a wedge bull flag.

Today might form a trend from the open bull trend. If there is a strong rally on the open and it lasts for a couple of hours, the Emini then usually goes sideways until it gets closer to the moving average. At that point, it decides between trend resumption and trend reversal for the last 1 – 3 hours of the day.

Today has a higher than average chance for a bull trend because of the gap up in an oversold market. If the Emini stays above the moving average for two hours or more, high probability trading is to focus on buying for a swing trade, especially if there is a tight bull channel and a small pullback bull trend.

As always, an important day trading strategy is to be ready for the exact opposite of what is likely, and do not be in denial if today instead is a strong bear trend. Just scroll back on the 5 minute chart and you will see several recent examples of big gaps up that led to bear trend days. That is the potential pain trade. 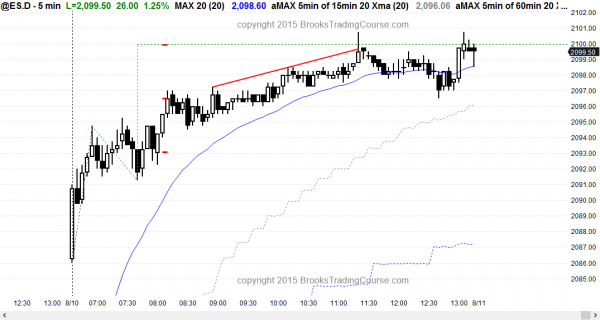 The Emini had a small pullback bull trend day. There was the usually deep pullback that was about 50% bigger than the biggest prior pullback since the start of the small pullback trend at 7:40 a.m.

Today was a predictable small pullback bull trend. Since it was climactic, there is an 80% chance of at least a 2 hour sideways to down move tomorrow. However, there is often follow-through buying for the first hour or two. There is room to last week’s high, which is the 60 minute lower high and therefore an important target.

The bears need lower highs to argue that the Emini is in a bear channel. If the Emini goes above that lower high, the 60 minute chart is then either in a trading range (which it already clearly is) or in a bull swing for a test of the top of the 7 month trading range (the all-time high).

On the daily and weekly charts, the most interesting Forex crosses are with the Canadian dollar, and its higher timeframe charts offer the best potential Forex trading for beginners over the next week or two. The weekly chart of the EURCAD has retraced about 50% of the selloff that began in early 2014 and it is now testing the top of the late 2014 trading range. Day traders who are learning how to trade the markets can see that the rally is wedge, with the first push up being the March 2015 bear flag.

The weekly chart of the USDCAD is also in a third push up, but the rally is much stronger, and it is breaking above the 2009 lower high. However, because the rally is in a wedge candlestick pattern, it is a buy climax and it might lead to a reversal down for several weeks, and this can begin at any time.

The Canadian dollar sold off overnight and the selloff in the EURCAD was stronger. It is now in a pullback, but it might have a swing down today.

Most of the other Forex online currency trading was within trading ranges last night and on the higher time frames, but those trading Forex markets for a living are always ready for a strong breakout and a swing trade.