Yesterday ended always in short because of the selloff at the end of the day, but the 2nd half of the day was still a trading range. Today open within that trading range, which increases the chances of more trading range trading. However, the first four bars were big bear bars, and they could lead to a trend from the open bear trend day, like yesterday.

The bulls are hoping that the two day selloff is just a wedge bull flag after the 3 day rally. They want this to be a sell vacuum test of the bottom of the gap from 2 days ago. They then want the sell climax to reverse up in an opening reversal and create an early low of the day. When the selling is this strong, the bulls need a credible bottom, like yesterday’s wedge bottom, or a strong reversal up, before they will swing trade. Until then, bears will swing trade and scalp, and bulls will only scalp.

Because the climactic selloff is still above the bottom of the low of last week, the Emini might soon enter a trading range. At the moment, the Emini is always in short, but this sell climax might be an exhaustive move and there probably will not be much more down. If it is a climax, it could be followed by an endless pullback up, which could create a swing trade for the bulls. This could be in the form of a bull channel that appears to be a bear flag, but instead of getting a bear breakout, the channel just keeps going up.

Alternatively, the Emini might rally for 10 or more bars and then pullback to a major trend reversal. Until there is a clear reversal, bears will look to sell rallies, like around the moving average.

My thoughts before the open: 60 minute chart is in a trading range

Although Friday reversed down, the selloff is still only a pullback on the 60 minute chart, which appears to be forming a tighter trading range. This might reduce the swings on the 5 minute chart today. The bears want a lower high major trend reversal on the 60 minute chart, but there are probably not enough bars. The bulls want Friday’s selloff to be a bull flag after a 3 day rally. Both have good arguments and the result is usually a trading range. 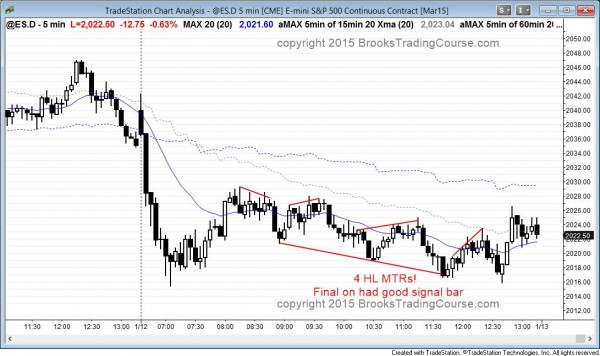 The Emini sold off strongly on the open, and then entered a trading range after testing a leg 1 = leg 2 measured move and a measured move down from the 1st 2 bars.

Today’s early selloff was the 2nd leg down from a three day rally. The bulls hope this is the end of the pullback, but are willing to buy if there is one more leg down and one more reversal up from a wedge bottom. The bears see Friday’s rally as a lower high major trend reversal (head and shoulders top), but the Emini is still in a 3 month trading range on the 60 minute chart with no strong breakout in either direction yet.

The 5 minute chart made 4 attempts at forming a higher low major trend reversal, but the 1st 3 resulted in wedge bear flags. The final one had a strong buy signal bar. The rally at the end of the day might be enough for the bull to expect a second leg up tomorrow. They want to test Friday’s high tomorrow or the next day. If they can get the rally, the bears will try to create a 60 minute double top and lower high.

The past 2 trading days have spent most of their time within tight trading ranges. This increases the chances of more of that tomorrow. The bears want trend resumption down after today’s early selloff. The bulls want a trend reversal up. Even if the bears succeed in getting another leg down, it will probably be bought as long as the bulls can keep it above last week’s higher low or the December low. Even though I think the Emini will have a 20% or more correction this year and it might have already begun, there is no convincing evidence, and most traders will continue to treat the Emini as being in a 3 month trading range on the 60 minute chart.