Emini January effect and barometer are useless for traders

The Emini opened with a big gap up. The day began with a big bear bar in the middle of Friday’s tight trading range. Since the risk for the bears was big and the probability low, the bulls bought below the bar. The bulls tried for an opening reversal up from the moving average, but are forced to buy at the top of Friday’s range.

At the moment, the big gap up and reversal, and strong bull bar, make the day Always In Long. Yet, unless the Emini breaks strongly above Friday’s tight trading range, it will probably go sideways for an hour or so and form a small double bottom before trying to rally again.

The bulls will probably buy any selloff, even if it retraces 50% of the gap up. Therefore, the odds favor either a trading range or a bull trend day today.

The Emini had bear trend resumption late Friday. They need strong follow-through selling this week if this is the start of a 3 – 10% correction. Most reversal attempts become bull flags and therefore this 2 week selloff will probably be another bull flag. However, from the weekend blog, you can see that the odds are 70% that at least a 3 – 5% correction will begin early this year. The bears need consecutive big bear bars on the daily chart, or 3 – 5 smaller bear bars. Because the January 19 congressional vote to avoid a government shutdown is a major catalyst, the Emini might stay mostly sideways until then.

Friday’s trend resumption down is similar to the trend resumption down on New Year’s Eve on the 5 minute chart in 2009. The Emini immediately reversed up on the daily chart for a week or two, and then fell 10%. Since the Emini is still in a bull trend on the daily chart, a continued rally is likely. Because of the buy climaxes on the daily, weekly, and monthly charts, a 5% pullback is likely as well. If the next few days are up, traders should look for a 1 – 2 week rally and then at least a 5% pullback.

The Emini is up 9 points in the Globex market. That means it will probably open around the top of Friday’s late sell climax. The bears want a double top with that high. The bulls want a breakout above, and then a measured move up.

The Emini will probably open with a big gap up. That increases the odds of a trend day. If there is a trend day, a bull trend is more likely when there is a big gap up. However, because the open will probably be in Friday’s tight trading range and at the 60 minute moving average, the odds favor an opening trading range. The big gap up would be a reversal of Friday’s big selloff. This increases the chance of a bull trend day today. 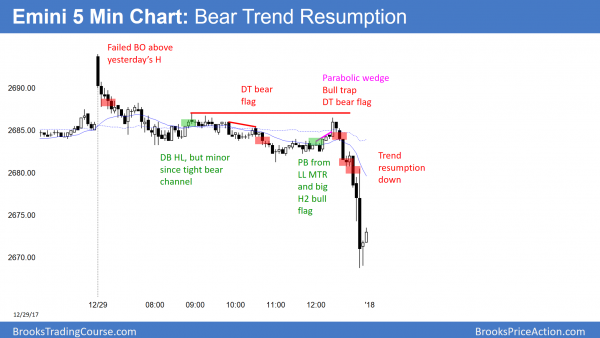 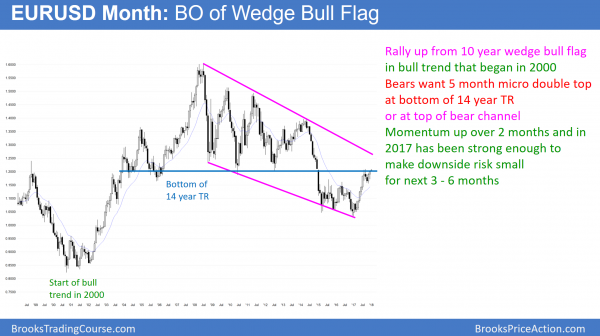 The EURUSD monthly Forex chart has been in a bear channel for 8 years. The channel is a bull flag in a bull trend that began in 2000.
The rally in 2017 was strong, and there is room to the top of the channel.

The EURUSD monthly Forex chart has rallied strongly for the past year. It is at the resistance of the bottom of a 14 year trend line. The bears see this as a pullback to the breakout below a head and shoulders top. They want a micro double top with the September high, and a reversal back down to a new low in the bear channel.

The momentum up in 2017 was strong. In addition, the 2 month rally was strong as well. This means that a micro double top will probably not be enough to resume the bear trend. The bears would need either 2 big bear bars on the monthly chart or 3 – 5 medium size bear bars closing on their lows. Without that, traders will see any selloff over the next 3 – 6 months as a bear leg in a 5 month bull flag.

The 4 day rally on the daily chart has been very strong. The chart is now testing the top of the 4 month trading range. Since the rally is strong, bulls will buy the 1st reversal down. Consequently, the downside risk over the next few days is small. The bears will probably need at least a micro double, top, which would need at least a few days to form.

Because the daily chart is at resistance, it might go sideways for a couple of weeks. However, the 2017 momentum was strong enough so that the odds favor a test of the next resistance at around 1.2500 in the next 6 months.

The EURUSD 5 minute chart has rallied in a tight bull channel for 4 days. Since the channel is now parabolic, the odds favor a trading range for a day or two. However, the breakout above the November high was strong. Therefore, bulls will buy a pullback to below 1.2000. Until the 5 minute chart begins to have at least 30 pip pullbacks, most bears will wait to sell. Because of the buy climax, bulls will begin to scalp on the 5 minute chart. Traders who are trading on higher time frame charts are holding long with a stop below last week’s low. 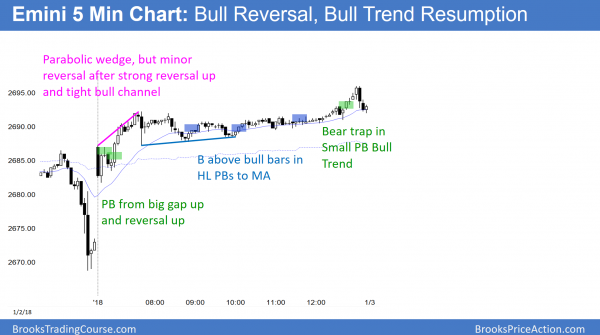 The Emini gapped up and had a small rally. It spent most of the day in a tight trading range, and had trend resumption up into the close.

The gap up and rally reversed Friday’s late selloff. The bulls got a 2nd leg up late in the day. The daily chart is still in a bull trend and today’s reversal was strong. The odds favor a new all-time high tomorrow.

Although the buy climaxes on the daily, weekly, and monthly charts limit how much longer the rally will last, there is no top yet. Furthermore, the bulls will buy the 1st 5% correction. Consequently, the downside risk over the next several months is not great.