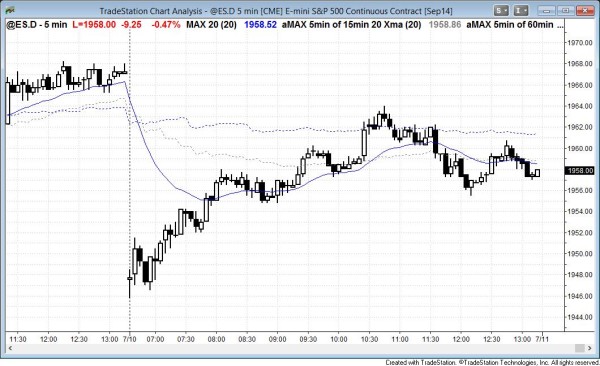 Chart posted after the close. Gap down and reversal up because today fell below last week’s low. That made today the first pullback in a 10 bar bull microchannel on the weekly chart. Odds favored the first bear reversal would fail. However, the market usually tries to get above the top of the microchannel and then typically has a bigger correction. This means that the market might go up for another 2 – 3 weeks and then have a bigger correction down. The minimum target would be about 10 bars (10 weeks) and 2 legs. Alternatively, the pullback might have already begun. Less likely, the trend up will continue for several more weeks without a pullback.

Posted 7:31 am PST.
The key feature in today’s intraday report is the big gap down but reversal up. I have been talking about the market probably trying to reverse down since it finally broke above the top of the weekly channel last week. I said that it could turn down at any point, but it might take as long as a month. I mentioned that put spreads were a reasonable way to trade the setup. Initial downside targets include the bottom of the wedge, which is the June 12 low of 1917.50, and then the weekly bull trend lines below. The first is below 1900, which is the breakout point as well.

I mentioned in the room yesterday that the 2 day rally was probably going to be followed by another leg down because of the wedge top on the daily and 60 minute charts, and I said that I bought put spreads. A leg 1 = leg 2 measured move down projects to 1942.23. The bulls see the selloff as a large high 2 buy set up (an ABC pullback), and the bears want it to be a breakout and the start of a trend down. Wedge tops often pullback to around 50% and then enter a trading range. The gap down is around a 50% pullback. Then, the market decides between trend resumption up in the form of a large high 2 buy setup (an ABC pullback), or trend reversal down in the form of another lower high in a developing bear trend.

When the market has a very big gap up or down, it usually goes mostly sideways in a trading range for a couple of hours until it gets closer to the moving average. The bigger the gap, the more likely there will be trend resumption. The bulls need a strong breakout composed of several consecutive bull trend bars. Without that, the odds are that any rally will fail near the moving average, where bears will look to short.

At 7:30 am PST, the Emini rallied about 7 points above its open. This greatly reduces the chances of a bear trend day. How many bear trend days have 7 point tails on top? Since the follow through after each strong bull bar has been weak, this is probably a bull leg in what will become a trading range, or a broad bull channel. The rally has enough buying pressure so the the 6:55 low will probably remain the low for at least a couple of hours and bulls will buy pullbacks.