The Emini formed a 17 point tall doji bar after the report this morning, and then traded sideways. Yesterday was a triangle, and today opened within the triangle and the 1st 2 bars had prominent tails. This is trading range price action, and it reduces the chances that the bulls reach a new all-time high today. However, that is the goal of the bulls, and if the Emini is within 10 points of it in the last hour, bulls will try to create a Buy The Close rally into the close.

The bears want to reach weekly support below because today is a Friday. Their 1st goal is to create a bear body on the weekly chart, which means a close today below Monday’s open of 2077. If it is within 10 points in the final hour, they will try for a Sell The Close selloff.

The Emini opened with trading range price action in the middle of a 3 day trading range, and major targets about 15 – 20 points above and below. Yesterday triggered a sell signal on the daily chart, and the bulls failed to get above the all-time high. The bears have a slightly better chance of a pullback over the next couple of weeks, and they will try to begin it today.

At the moment, the Emini is Always In Short, and it has a good chance of closing this week below the open of the week, creating a bear reversal bar on the weekly chart. Even though the Emini is still within its 3 day trading range, bears will sell rallies. The best the bulls can reasonably hope to get over the next hour is a trading range. They want an opening reversal up from yesterday’s low, but the selloff was strong enough so that they will probably need a double bottom. Bears will sell the 1st rally. If the bulls are giving up on their goal of a new all-time high over the next few days, today could be the start of a leg down on the daily chart, and it could be a big bear trend day.

The Emini broke above the August 17 top of the bear trend, but then paused without immediately continuing above the all-time high, which was just a little higher. When a market has 2 major resistance areas above and it breaks above one, but then does not immediately break above the other, those who trade the markets for a living know that this is not how the strongest bull trends behave, and it is common when the rally is a bull leg in a trading range instead of in a bull trend.

Going into today’s unemployment report, there was an unknowable amount of bear dollars wanting to sell at or just below, or even above, the all-time high. Even if the bear dollars were far greater than the bull dollars, the momentum up over the past 6 weeks has been so strong that the bulls are confident.

Traders learning how to trade the markets should realize that when a rally is as strong as this one has been, no matter how strong the bears might be, the bulls will usually buy aggressively after any initial selloff. This means that even if there is a series of big bear trend bars over the next several days, the odds are high that the bulls will buy again somewhere in the middle of the bull swing. The result then would be a test of the top of the trend. If the bears begin to turn the market down again, traders will view the selloff as confirmation that a more important top is in. Bulls will take profits and only look to buy after at least 10 bars.

Since the double top would be small on the weekly chart, but have at least 10 bars on the daily chart, traders would expect the 10 bar correction on the daily chart as their minimum target. At that point, if the selloff was not too strong, bulls will buy again, and they will convert this major trend reversal top into a trading range or a bull flag. The bears will look to sell every rally, hoping to create an endless bear channel that finally breaks below the low of the yearlong trading range.

Trader know that most trading range breakouts fail. The Emini has been in a big trading range for a year. Going into today’s report, no one knew where the bears would come in or how strong they would be. If most bears saw the past year as a trading range and were waiting to sell a failed breakout above that range, the bulls would get their new all-time high, but the breakout would then fail and the Emini would then return into its yearlong trading range. Once there, the process would continue until the bulls or bears created a strong breakout with follow-through.

The Emini sold off strongly on the report this morning, but reversed back up sharply. Yesterday was a weak sell entry bar for a parabolic wedge top. If today becomes a big bear trend day that closes on its low, it would undue yesterday’s weakness and increase the chances that a 10 day correction has begun. If instead it breaks to a new all-time high and closes on its high, bulls will look for follow-through buying over the next several weeks. Bears would need to reverse the breakout within a few days to keep their hopes of a trading range credible.

Because today’s selloff and reversal up and then back down were so big, traders are confused and they lack conviction. This increases the chances that today will have a lot of trading range price action and not give traders confidence that either the bull or bear cases are clear. However, the longer the bulls fail to get their new all-time high, the more likely it is that a trading range that will last at least a couple of weeks has begun. The downside targets are the higher lows on the 60 minute chart down to around 2050, and possibly the breakout point at the September high, around 2010.

The EURUSD’s daily chart tried to reverse up from a small wedge bottom, but broke strongly below that wedge bottom and below the bottom of the 6 month trading range today. When a market breaks below a wedge bottom, traders look for a measured move down. The wedge was 300 pips tall so traders will look for a test down to around 200 pips below yesterday’s low. That is around 105, which is near the April higher low on the daily chart.

When there is a bear breakout below a wedge bottom, there is about a 50% chance of the measured move down, and a 50% chance of a failed breakout and then a reversal up. A big bear breakout, like the one 5 minutes ago, shift the odds to about 60% for the bears. The selloff was huge, and therefore climactic, and it followed a series df climactic selloffs on the 60 minute report over the past 2 weeks. This reduces the chances of strong follow-through selling today and it increases the chances that today go mostly sideways. Traders will look to sell the 1st rally, but if they are unable to create a strong bear breakout, then the day will be in a trading range.

The dollar was strong against all markets on the report, now 15 minutes ago. Traders will buy the 1st pullback, expecting at least a 2nd leg up. If that leg stalls within a few bars on the 5 minute chart, a trading range day will be likely. It is possible that the dollar can reverse all day, but any reversal will probably be more in the form of an endless pullback and not a strong bear breakout. 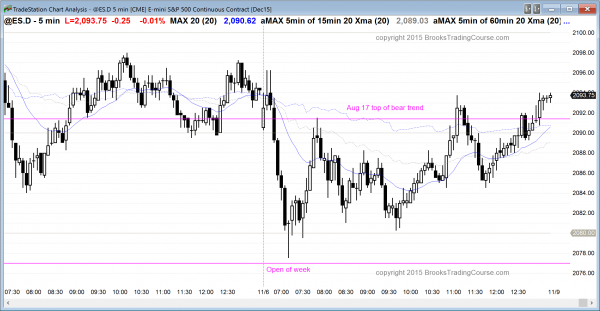 The Emini sold off on the open, but held above the open of the week and entered a trading range.It closed near the high and created a buy signal bar on the daily chart.

The Emini sold off, but the bears were unable to get a close below the open of the week. The result was the 6th consecutive bull body on the weekly chart, and the daily chart now has a high 1 buy setup for Monday. Since the Emini is at the top of a yearlong trading range, it is more likely to pull back than to breakout. There will therefore probably be sellers on Monday above today’s high. Even though the daily chart is overbought, it still might get a new all-time high next week, but a pullback is more likely.