The Emini reversed up strongly from below yesterday’s low. It formed a wedge bottom on the 5 minute chart and an expanding triangle on the 60 minute chart. The targets are the September 1 low and the 60 minute moving averages. The Emini is Always In Long, and the reversal up was strong enough so that a 2nd leg up and a measured move up are likely, even if there is a deep pullback. The best the bears can probably hope for is a deep pullback and a trading range. It is possible that the bull reversal will result in a trading range, but the odds of a bear trend are small for the next couple of hours.

On most days, if something has a 60% chance of occurring, it is high probability event. Some days have events that are 75% likely, and today is an example. Whenever there is a trend that is in a tight channel, especially when the market is already oversold and at the bottom of a trading range, the next day has a 75% chance of a sideways to up rally that has at least 2 legs and lasts at least 2 hours. Although there is a 50% chance of follow-through selling on the open that can last for an hour, or even two hours sometimes, the odds favor the bulls either on the open or after that initial selling.

Yesterday’s tight channel, small pullback bear trend was extreme behavior, and extreme behavior is unsustainable and therefore climactic. The bears become happy to take profits and wait for a couple of hours before considering selling again. They are exhausted. The bulls know how the bears will behave, and the bulls are less worried about continued selling at the lows. They are willing to buy new lows, betting that the bears will use new lows to buy back shorts, instead of selling new bear breakouts. With both bulls and bears beginning to sell new lows, the bear trend begins to evolve into a trading range.

The bulls are not expecting a bull trend, but are hoping for one. They are expecting at least a rally that will go far enough for a swing trade. Those learning how to trade the markets should look for a major trend reversal because it could be a strong buy setup for a swing up. This does not necessarily mean that today will be a bull trend day. However, the context is good for at least one reasonable swing trade for the bulls, and online day traders need to be prepared. The setup is often clear. There is often a strong enough bull breakout so that the odds of a measured move up can be 60% or more.

Sometimes the bulls only get a trading range, but they often get a trend day. If all they get is a broad trading range that lasts 2 – 3 hours, they then will have generated enough buying pressure to make them more eager to buy a bear breakout. This means that a bear breakout below the trading range has an increased chance of failing and then reversing up. Traders will look back at the range as the final bear flag on the 60 minute chart.

When there is a strong trend, especially in a bear market like we have in the stock market on the daily chart, those who trade the markets for a living know that an exhausted market can get even more exhausted. They will be ready to swing trade their short positions if today is one of those with a 25% chance of a strong bear trend on the day after a sell climax day. However, if the selling is on the open, the day trading tip for the day is to expect it to reverse up by the end of the first hour. If instead it continues all day, keep selling until the bulls create a credible bottom or have a strong bull breakout above the bear channel.

The EURUSD rallied yesterday, but stalled at the September 24 lower high, and pulled back overnight. It is still in the middle of a tight 6 month trading range and an even tighter 3 week trading range, and it therefore remains in breakout mode. Until there is a breakout, there is no breakout. Traders will assume that every strong rally, like yesterday, will fail to have follow-through, and it will fail. Eventually there will be a breakout and it could lead to a big trend. Look at the big bear trend on the daily chart of the S&P500 after it broke below a 7 month tight trading range.

Although the EURUSD sold off for the past 6 hours, it is still above the bottom of yesterday’s bull breakout. The bulls see last night’s selloff as a bull flag on the 60 minute chart. The channel down on the 5 minute chart is tight. This means that the bulls will probably need the chart to go sideways for an hour or two to create enough buying pressure before they will to look for a reversal up to test yesterday’s high.

The bears had another bear breakout on the 5 minute chart an hour ago. They want it to be a measuring gap that will lead to a test down to the bottom of yesterday’s bull reversal. The bulls want the bear breakout to an exhaustion gap and a climactic end to the overnight selling. When both the bulls and bears have reasonably arguments like this, the market usually goes sideways.

Exhaustion gaps are more common than measuring gaps, especially in trading ranges, so if there is a swing trade today, it is more likely to be up. Because the selling was strong overnight and the daily chart is in a tight trading range, any trend today will probably not be strong and it probably will not last more than 2 – 3 hours before another trading range forms.

The USDJPY 60 minute chart yesterday reversed up strongly from the bottom of its month long triangle. It broke above the 60 minute bear channel, and the breakout was strong enough so that a 2nd leg up is likely after any pullback. Because the selloff of the past 3 days was strong, the 1st pullback might be deep. However, the odds are that it will be bought and the bulls will get a 2nd leg up. Day traders should be ready to buy either the pullback, or the resumption of the bull reversal from yesterday. 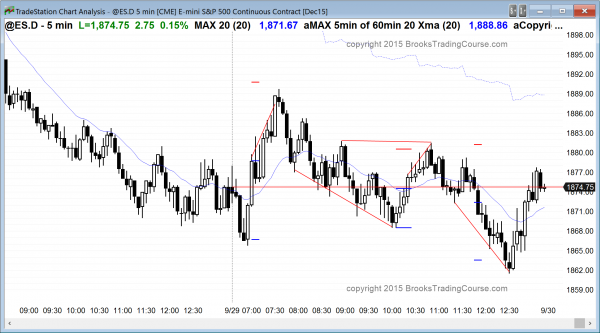 The Emini had a brief bear breakout below yesterday’s triangle and then rallied strongly. It formed a parabolic wedge and the channeled down to a higher low major trend reversal. The reversal up failed at a double top bear flag and the Emini fell to a new low of the day. It rallied back to near the open of the day to create a doji day.

The Emini is testing the August 25 and 26 lows, where it reversed up violently. The daily chart is in a bear trend, but the reversal up in late August was strong enough so that this test down will probably be bought in the next couple of days for a bounce back up. There is a 60% chance of a 2nd leg down from the August selloff. The odds are that this selloff of the past 2 weeks will bounce, but it might be the start of the 2nd leg down.

Tomorrow is the last day of the month, so last month’s low and this month’s low are magnets for tomorrow’s close. As big as the selling has been for 2 week’s, the month is still an inside bar on the monthly chart. On Thursday, bears will see this month as a sell signal bar. The Emini will probably have to trigger the short, but the odds are there will be buyers below because it is a sell signal at the bottom of a trading range on the daily chart.