The Emini began with a trading range open, which meant that day traders began to look for a double bottom or wedge bottom to buy, or a double top or wedge top to sell. It was a limit order market initially. The bulls wanted a reversal up above last week’s low because last week was a sell signal bar. They also wanted to close the gap below yesterday’s low. The bears wanted the opposite.

A trading range open like this, especially in the middle of a trading range on the daily chart, increases the chance that today will have a lot of trading range price action today. It means that rallies and selloffs will probably be limited to 2 – 3 hours and then be followed by a swing in the opposite direction. Trends up and down will more likely be legs within a trading range day. Although the odds of a strong trend day are less, day traders will be ready for a trend day if the Emini begins to get consecutive strong trend bars in either direction.

I am posting now because a trading range open can last 2 – 3 hours. Until there is a strong breakout with follow-through up or down, the odds are that today will be mostly a trading range day. Traders will look to buy low when the Emini reverses up and sell high when it reverses down. In the absence of a strong directional move, day traders will be fairly quick to take profits.

Although the Emini is Always In Long at the moment, its direction is not yet clear, and it might take another hour or two before a swing begins. The Emini often has to get close to the moving average before it begins to trend.

Pre-Open Market Analysis: Learn how to trade a big gap down
S&P 500 Emini:

The Emini is down about 30 points in the Globex session, and it will probably open with a big gap down. It is around a measured move down from Friday’s gap down, and it is near the September 9 low of 1925. The bulls want a double bottom higher low major trend reversal up from there or from the September 1 low of 1989.25, or the August 25 low of 1850.75. The bears want the Emini to fall below all of these support levels and to resume the bear trend on the daily chart. The first important target is the bear low of 1821.75, and next is the October 2014 low of 1781.50, which the Emini has about a 50% chance of reaching.

The candlestick pattern on the weekly chart was a sell signal bar below the moving average. I wrote yesterday that the Emini would probably fall below the low of the weekly sell signal bar early this week, but that it might find buyers there. The Globex session is about 5 points below the low, and it might gap below and form a potential breakout or measuring gap on the weekly chart. The bulls do not want the bears to have that sign of strength, and they need a reversal up within a week or two, probably from one of the higher low support levels that I mentioned above. The bears want as strong a bear breakout as they can create, and they want strong follow-through. If they get it, they might be able to create a stronger bear trend that what is currently likely. They might even be able to test the March 2000 high and the monthly bull trend line, both well below 1700. This is not likely at the moment, but those are goals for the bears.

Traders who trade the markets for a living know that whenever there is a big gap, the odds of a trend day are higher. A big gap results in the Emini being far from the moving average. This usually limits the downside until the Emini gets closer to the moving average. There can be some selling for an hour or so, but it is then usually followed by either a trading range or a reversal up until the Emini gets closer to the moving average. Once there, the Emini decides between trend resumption down and trend reversal up. In the 1st 2 hours, if there is not an obvious trend from the open up or down, the Emini often forms either a double top or wedge bear flag that leads to a trend down, or a double bottom or wedge bottom that leads to a trend up. The day trading top for those learning how to trade the markets is to look for an appropriate candlestick pattern for an entry setup.

If the Emini reverses up strongly on the first bar or two, today could be a bull trend day. The bulls need to close the gap on the weekly chart, and then the gap on the daily chart. As big as the gap down will probably be, the Emini is still in a trading range on the daily chart, and this selloff might simply be a sell vacuum test of support. The bulls will need a strong reversal up to convince traders that this is the case.

A big gap is a sign that the bears are strong. This sometimes results in a trend from the open bear trend. If there is a trading range after an hour or so and the initial selling is strong enough, the day often enters a bear channel for the rest of the day.

The 60 minute chart of the EURUSD has fallen in a wedge channel over the past week and it is near the September 3 low. The bulls need a double bottom and the bears need a strong breakout. Online day traders know that the wedge bear channel is a sell climax pattern and the odds are that there will be a bull breakout today or tomorrow. However, the best the bulls will probably get is a trading range. The wedge is tight enough so that the bulls will probably need to create buying pressure before a reversal up will get very far, and they can do it by stopping the selling and holding the market sideways for a day or two. From there, they might be able to create a major trend reversal for a swing up for a few days.

The Euro was also weak against the Yen last night, but it is still in the trading range of the past 5 months, and every leg up or down on the daily chart is more likely just a test of the top or bottom of the range than the start of a trend up or down. As strong as the selling in the EURJPY has been for 3 days, unless the bears get a strong breakout below 132, it is still in a trading range, and traders will expect buyers to come back somewhere above that level. Last night’s selling was strong, but it was in a channel for 6 hours, and the channel is beginning to flatten. The odds are that a trading range will begin to form and that it will last at least a couple of hours.

The USDCAD reversed up strongly from last week’s bear breakout, but the 60 minute chart is in its 3rd push up after the strong reversal up. This is a series of buy climaxes and a type of wedge top, and the odds favor that it begins to enter a trading range. This is especially true because it is now near the top of the month long trading range. The 5 minute chart has been in a broad bull channel overnight and the last couple of legs were especially big and therefore probably climactic. This makes a trading range likely on the 5 minute chart as well, even though it has been in a bull trend for 6 hours. 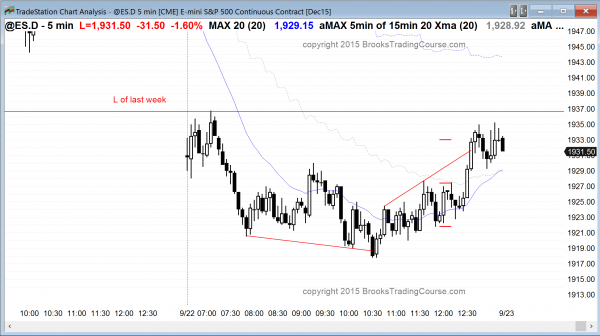 The Emini sold off early, but entered a trading range and rallied back to close around the open of the day