The Emini had a strong bull reversal on the 1st bar, but then weak follow-through. Although the Emini became Always In Long on the first bar, the bad follow-through made a trading range likely. The bulls want a bull channel or a double bottom HL MTR. The measured move up is around yesterday’s low, which is the target for the bulls. The bears want a breakout below the low of the day and then a measured move down.

Since there has been a lot of trading range price action, if the bulls get their rally, it will probably be a weak bull trend and form a channel with pullbacks and have bad follow-through. The bears want the bull channel to be a bear flag that has a bear breakout and then a measured move down.

At the moment, the Emini is Always In Long, and the day will probably either be a bull trend day or a trading range day, at least for a few hours.

Pre-Open Market Analysis
S&P 500 Emini: Learn how to trade the markets in a bear leg

The Emini reversed down on the FOMC report yesterday and there was follow-through selling last night. Today will probably gap down. However, it is still in its month long trading ranges. Because gaps within trading ranges are common, they do not create high probability breakouts for the conversion of the trading range into a new trend. They are usually just part of the sharp up and down process that creates the trading range.

As you know, I believe the daily chart is in a bear trend. However, the Emini has had several strong reversals down over the past month, but each one has been bought. The odds are that this one will as well. However, one of these bear breakouts will be the start of the 2nd leg down on the daily chart, and traders will not have a high confidence that the bear has resumed until the selloff first goes a long way. That is one reason why the high probability trading within a trading range is to sell high, when the bulls are strong. It is also the reason why I think that whatever selloff we get over the next few days will be bought. Strong bulls will buy low.

If they do buy this selloff today or next week, day traders will watch the rally carefully for signs of failure, This could then create a lower high (head and shoulders top bear flag) that could lead to a strong bear breakout and a test of the bear low and of the October low.

Since this selloff is following a parabolic bear rally, which is a buy climax, the odds are that it will have at least two legs down. This means that bears will sell the first rally. Trapped bulls will sell as well. The bears need lower lows to convince online traders that they have taking control. While it is likely that the bears will be able to push the Emini below a minor higher low in the rally of the past 2 weeks, like the September 10 or 15 lows, the first important higher low is the September 1 low. If this selloff reaches there, the bulls will see a double bottom higher low major trend reversal on the daily chart. They would have a 40% chance of being right. The bears would short any rally from there, betting on a lower high and then a bear breakout and measured move down. That target is below the bear low from August.

The day session will probably open with a big gap down. While there is often follow-through selling for the first hour or so, when the Emini is far below the moving average, it usually has to get closer to the average price before much of a trend can begin. It can get there by rallying or by entering a trading range. If there is a big bull reversal on the first bar or two, it would be a reasonable swing buy setup for a possible low of the day. If instead the day begins with a couple of good size bear bars closing on their lows, many bears will sell for a swing down, knowing that the selloff would probably be limited because the Emini is so far below the moving average.

Today is a Friday so weekly support and resistance are important. The nearest obvious target is the open of the week at 1952. The bears want a close below there to create a bear reversal bar on the weekly chart. The bulls want a rally and for the week to close above 1981.75, which is the top of the buy signal bar on the weekly chart from the bull reversal bar candlestick pattern from 3 weeks ago.

I have been writing for a couple of weeks that the USDCAD had very good potential for a swing trade down to the 1.2850 area. There was a strong swing down overnight, and there are still 200 pips left in the trade. When traders who trade Forex for a living see a big breakout, like the one in the overnight session, they know that the probability of some kind of measured move based on the measured move is about 60%, and that the probability of a failed breakout and a reversal is 40%. The best Forex trading strategy for day traders who are too uncomfortable to sell at the bottom of a breakout is to sell rallies to resistance, like the 60 minute moving average, betting that a bear channel will follow the bear breakout.

Traders learning how to trade the markets need to know that whenever one side (here, the bears) has high probability, it always has to come with bad risk/reward because there has to be a reason for other institutions to take the other side of the trade. When there is a big bear breakout, the stop is above the top of the bear leg. Since the breakout is big, the stop is far and the risk is therefore greater that it is with other trades. Also, waiting for the probability to go up, as happens with the big breakout, means that there is less profit remaining. This means the reward is less. The combination of greater risk and smaller reward creates a weak risk/reward, which is always present when the probability is high.

The EURUSD also had climactic buying overnight. Although there is no reversal down and conversion into a trading range yet, the odds are that it will happen today. 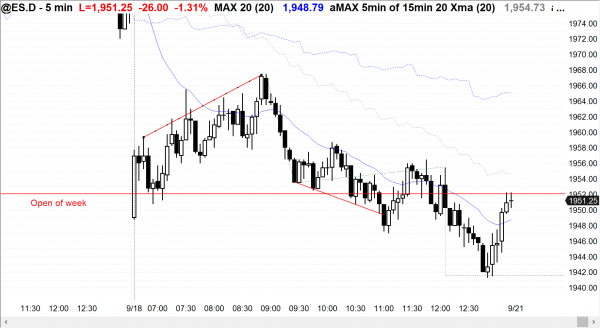 The Emini had a weak rally after a gap down, and then a bear breakout below the bull channel. The broad bear channel ended with an exhaustion gap bar at the end of the day, and the week closed at the open of the week, creating a doji bar on the weekly chart.

The Emini had a gap down, after the failed breakout above the double top bear flag on the daily chart, but the day was a doji candlestick pattern on the daily chart in the middle of a 4 week trading range. The odds are that there will be little follow-through selling over the next few days, but since the daily chart is in a bear trend, there is a 60% chance of a selloff at some point between now and several months from now, and it should test below the bear low. It has a 50% chance of falling below last October’s low.