The Emini had 4 doji bars in the first 5 bars, and entered a breakout mode market. This initial trading range price action increases the chances for a lot more trading range price action today, and it reduces the chances of a strong trend day up or down. Traders need to see a strong breakout with strong follow-through in either direction before they will conclude that trend trading will replace trading range trading. Until then, traders will take quick profits and enter more with limit orders, betting breakouts will fail to go far.

The range is small and it will probably at least double at some point. However, the breakout will probably not last very many bars before it enters a channel or trading range. If the trend is a channel, which is more likely than a strong breakout, swing traders will have to rely on wide stops. Many traders will prefer to take scalps and re-enter. For example, if the current bull swing continues up, bulls will buy pullbacks and take profits at new highs, and bears will sell above the prior high for a scalp. This will continue until there is a convincing breakout up or down.

The Emini sold off after the FOMC report on Thursday, but formed a higher low on the 60 minute chart on Friday and it will probably gap up today. As strong as the selling was, it held above the bottom of the strong rally that began on September 15, and the 60 minute broad bull channel is still intact. If the Emini rallies over the next day or two, it will form a common pattern. The broad bull channel is a bear flag on the daily chart. Until it strongly breaks to the downside, there is always about a 50% chance that any selloff is simply another bear leg in a bull channel, and that it will be followed by another new high.

The important and obvious target for the bulls is the bottom of the 7 month trading range, which computers will see as the March, July, or August low. This area is between Thursday high around 2010 to about 2040. Whenever something is so obvious, there are usually not enough traders on the other side, and what appears to be obvious will not happen This means that if the market gets nears 2030, it will probably go at least 10 – 20 points higher, and maybe up to the 2091.25 top of the bear breakout or even a new all-time high.

Since last week formed a reversal bar in a bear flag on the weekly chart as its candlestick pattern, those learning how to trade the market should know that its low is a magnet. Because it was a doji bar in a tight trading range, it is a weak candlestick pattern and it is more likely that there are buyers below last week’s low. It is a low probability sell signal, but the Emini probably needs to see what’s below it. Those who trade the markets for a living know that there are probably more buyers than sellers there.

Today will probably open with a gap up, but last week’s selloff on the 60 minute chart was strong enough so that the bulls will probably need a test down and a major trend reversal before they will be able to test above last week’s high. The bears hope that this gap up leads to a lower high major trend reversal on the 60 minute chart, a breakout below last week’s low on the weekly chart, and a resumption of the bear trend on the daily chart.

Since most breakouts in a trading range fail, it is more likely that the Emini continues sideways for at least another couple of weeks, and it might have to form a low 2 or small double top on the weekly chart. If it falls below last week’s low, that would be a low 1 sell signal. When a reversal up from a bear breakout is very strong, like this has been, the bears will probably need a low 2 sell setup, which is a 2nd attempt to resume the bear trend. This would take several more bars on the weekly chart.

The odds are that the Emini will continue to have legs up and down that last a few days. Today might be the start of a small leg up. Since this is a trading range on the daily chart, every leg up and down will be disappointing for trend traders, and if there is a rally today, it probably will not last more than a couple of days before there is a test back down.

The financial markets had strong moves after Thursday’s FOMC report, but the Forex markets remain in trading ranges. Until there is a breakout up or down, every strong move up or down is a leg within the trading range and it will likely not last more than a day or two. The EURUSD sold off overnight, and it has been in a tight channel. A bear channel has a 75% chance of a bull breakout and a 25% chance of an acceleration down with a bear breakout. The channel has gone one for about 50 bars, which is a long time. The odds are that it will evolve into a trading range this morning, and then it will decide between trend resumption up and trend reversal down. Until the trading range grows to more than 20 bars, the odds favor the bear breakout. After that, the probability gets close to 50% for the bulls and bears. The EURCAD has already broken above its bear channel and the rally over the past hour will probably be the start of the trading range.

Last week’s strong reversal up from the bear breakout on the daily chart of the USDCAD has the market back in its month long trading range. There is room to go before it might form a wedge bear flag. The top of the first leg was the September 17 high, and the top of the 2nd leg was Friday’s high. Typically, traders then look for 2 legs sideways to down, but since the daily chart is already in a trading range, the rally is likely to not go much further, even without the wedge bear flag. 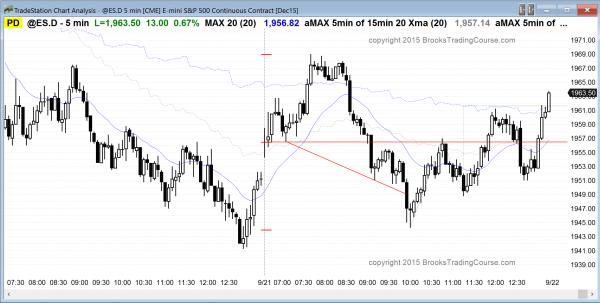 The Emini reversed down from the 60 minute moving average and from Friday’s gap down. It fell for a measured move down from the high to the open, and then reversed up again from a wedge bottom. It ended the day in a broad bull channel.

The Emini had trading range price action today, but held above Friday’s rally low and closed near its high. If it gaps up tomorrow, the candlestick pattern will be an island bottom. The bears want any rally to form a lower high on the daily chart. If the rally goes above Thursday’s high, the bears want a wedge bear flag. The bulls want a strong breakout above Thursday’s lower high and then a measured move up to far above the all-time high. There is a 60% chance of a major trend reversal and a 2nd leg down on the daily chart, and it is more likely to come from a lower high. The rally into the close increases the chances of higher prices tomorrow.