The Emini reversed down from above yesterday’s high and then had an opening reversal up from the 15 minute moving average. The selloff fro the open was about 15 points, which is a lot and it reduced the chances that today will be able to close much above the open of the day, if today rallies. However, the rally was big enough to make a bear trend day unlikely. This means that a trading range day is most likely. The bars and swings are big, but they probably will get small within the next hour, and the bulls will look to buy a test of the low of the day and the bears will look to sell tests of lower highs. At the moment, the Emini is Always In Long, but they need a strong breakout to a new high of the day if today is to become a bull trend day.

Pre-Open Market Analysis
S&P 500 Emini: Learn how to trade the markets when price action is confusing

The Emini reversed up from the bottom of its month long trading range over the past two days, and yesterday ended with a 3rd push up on the 5 minute chart with Tuesday’s high being the 1st push up. Since the rally yesterday was not clearly a 3rd push, today might rally more and create a clearer wedge bear flag.

In either case, the bears want a bear breakout below the wedge rally of the past two days and then a break below the bear low from August. The bulls want a bull breakout of the bear flag and then a measured move up to the top of the month long trading range.

Although the daily chart is in a bear trend and there is a 60% chance of a 2nd leg down, the rally from the August low was so strong that the 1st attempt to resume the bear trend will probably fail. This means that the selloff of the past few weeks will probably be followed by a rally to the upper half of the range. At that point, those who trade the markets for a living will take any new selloff more seriously. It would have a better chance of being the resumption of the bear trend.

If the current rally lasts for a few weeks and then begins to sell off, it would be around the time of the 1929 and 1987 crashes. I doubt that the market will crash, but beginning traders who are learning how to trade the markets need to appreciate the symbolic importance the 2nd half of October has to professional traders.

The market often sells off into late October and then rallies through the rest of the year. Bulls are hoping that the selloff for the past 3 weeks is the start of that rally. It might be, but I think that any rally into the end of the year will probably require at least a test down of this week’s low.

If the Emini rallies for a few weeks and tests down, the bears will see the selloff as the beginning of a bear trend down fro the right shoulder of a head and shoulders top. The bulls will see the selloff as a test of the neckline of the head and shoulders candlestick pattern. They would then expect a rally from there, which would turn the pattern into a big triangle.

The Globex is currently trading a few points above yesterday’s high, which means that there might be a small gap up today. Gaps within a trading range have limited predictive value and usually close within a couple of weeks. Since the gap will probably be small, it will be easier for the bears to close it on the open.

A selloff from above yesterday’s high could also be a turning down from the top of a wedge bear flag on the 60 minute chart. This increases the chances that an early selloff could lead to a bear trend day today. Whether or not it does, the odds are that the Emini will rally to around 1950 over the next week or two.

Although the past 3 days have had big swings up and down, there was a lack of strong follow-through in either direction. Repeated reversals with many pullbacks in every swing is trading range price action. After 3 days of it, it is most likely to continue today.

The USDJPY has been in an unusually tight trading range for 6 weeks, and is therefore in breakout mode. It is perfectly balanced between the bulls and bears. Each correctly believes that breakout attempts up and down will probably fail, and that the trading range will continue to grow. The result is that they both buy low, sell high, and scalp, which is the day trading tip when the market is in a tight range.

The bulls buy low to enter a long, and the bears sell low to take profits. The bears sell high to initiate shorts, and the bulls sell high to take profits. Both know that the triangle candlestick pattern will eventually end, and that one of them will finally lose money on the breakout. They don’t care because the loser will have made enough money betting against breakouts to more than offset the loss from the breakout.

If instead it continues to grow, the bulls will decide that the market will in fact fall more, and at least to a measured move down based on the height of the 6 week trading range. The bears are always selling. If the bulls give up and now sell (out of losing longs) as the market is falling, there is no one left to buy. The result is usually a big bear bar closing on its low, or a series of bear bars.

This breakout then usually becomes a measuring gap, and bulls will wait to buy until the market falls to a support level, like a measured move down. The opposite is true if there is a bull breakout.

I am mentioning this now because the triangle on the daily chart has become extremely tight. When that happens, the odds of a breakout near term become 50% or more. Any breakout of a triangle has a 50% chance of being the start of a swing, and a 50% chance of being a trap that reverses and is followed by a breakout in the opposite direction. Those trading Forex markets for a living need to be ready to change their style of trading from Forex scalping to a Forex swing trading strategy when the breakout begins.

The USDCAD has traded down in a tight bear channel on the 60 minute chart for 2 days and it has fallen 200 pips. Tight bear channels that last 50 or more bars have a 75% chance of a bull breakout and then at least a couple of hours of sideways to up trading. This will probably begin today. Since the channel is a bear trend, it is usually easier to make money looking to sell rallies. However, once there is a strong bull breakout, day traders will also begin to buy dips, betting on a trading range for a day or two.

The USDCAD 5 minute chart is turning down from a 4 hours double top bear flag. A double top bear flag is sideways price action. When that occurs late in a bear trend, it is often the final bear flag and it followed by a swing up. Day traders will be ready to buy if there is a reversal.

The bear trend can continue indefinitely. However, when a tight channel lasts for 50 or more bars, strong bears start to take profits and wait about 10 bars before selling again. Strong bulls begin to scale into longs, betting that the bears will begin to take profits. This process will probably start today or tomorrow. 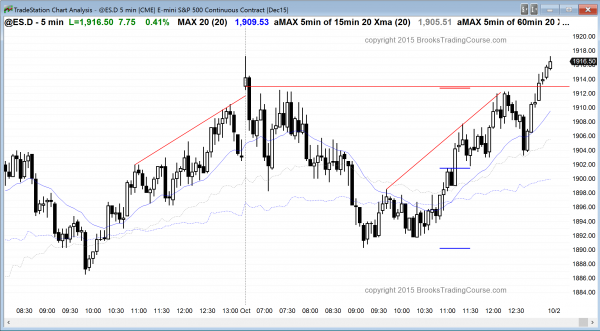 The Emini tested yesterday’s low and found buyers. The daily chart is reversing up from the bottom of the trading range. Although it might test back down, the odds are that the Emini will test around 1950 over the next couple of weeks. If it gets there, traders will look for a hear and shoulders top bear flag.