The Emini began with reversals up and down in a narrow range, which was a triangle, and it was in breakout mode. When that is the case, bulls look for a small bull reversal bar near the bottom that closes on its high, and bears want a bear reversal bar at the top of the range that closes on its low. If there is no reliable signal bar, day traders wait for a strong breakout with follow-through in either direction. If they see one, they enter, expecting at least a swing that lasts for a measured move.

When there are multiple early reversals, it is often a sign of a balanced market and it increases the chances that the day will have a lot of trading range price action. This means that if there is a swing up or down that lasts 2 – 3 hours, traders will be ready for an opposite swing later in the day. This can create another doji day, like 9 of the past 12 days. Also, when there is a lot of early two sided trading, the trend that comes from it often has many pullbacks and weak follow-through because day traders are quick to take profits, and counter trend traders are more willing to take scalps against the trend.

Unless today has a strong breakout with strong follow through, the odds favor weak trends with many pullbacks, and a lot of 2 sided trading.

At the moment, the Emini just had enough of a breakout to make it Always In Long, but there was a big tail on top of the bar and the bar stalled at the moving average. This is not how strong bull trend days usually begin. It needs to break strongly above the moving average if this is going to be a bull trend day. Without that, this rally might simply form a bear flag and be followed by a bear trend day.

The bears want a reversal down from the moving average. The bears need a breakout below the low of the day, or a double top or wedge top, before traders will believe the bears have taken control. Because the gap down was so big and the selling began only 2 hours ago, the bears still have at least a 40% chance of an early top and then a bear trend day.

Pre-Open Market Analysis
S&P 500 Emini: Learn how to trade the markets after a report

The Emini rallied for several days from the bottom of the trading range, but the rally was weak on the 60 minute chart. It lacked a lot of consecutive bull trend bars and had many big bear trend bars. It looked like a leg in a trading range rather than the start of a bull trend. Although the Emini might still test the 1950 – 1970 area before the bear trend resumes, it might not, especially since this is October, which is a month when the stock market has had some of its biggest bear surprises.

Today is a Friday so weekly magnets are important. The nearest ones are this week’s high and last week’s low. On the daily chart, 9 of the past 12 days closed near their opens. These are dojis candlestick patterns and are a sign of balance. They are common within trading ranges and less common in strong trends. One of the early signs that a trading range is ending is a series of consecutive trend bars. This has not formed yet, and sometimes it does not form, but in its absence, the price action is more consistent with a continued trading range.

The Globex market fell 30 points a few minutes ago on the unemployment report. This is a surprise move, and surprises tend to have follow-through because they trap traders. The odds at the moment favor a bear trend day, like a gap spike and channel bear trend.

Traders who are learning how to trade the markets should understand that when there is a big gap down, the Emini is far below its average price (the moving average). Bears are less willing to sell until the Emini gets closer to an average price, and aggressive bull scalpers who trade the markets for a living look to buy for a regression to the mean trade. They know that bears are uneasy about selling too low and bet that the downside is limited until the Emini gets closer to the average price. With bears hesitant to sell and some bulls willing to buy, the Emini often will rally for an hour or so, even is the rally is simply a pullback that leads to a big bear channel for the rest of the day.

Because there is often a trading range that begins within the first hour, bears will look for a sell setup within that trading range. The rally within the range often forms a double top or a wedge bear flag, and it can be strong. However, if it is simply a pullback that will lead to a bear trend day, it usually stalls near the moving average. Bears will look for a bear signal bar closing on its low, and then sell for a swing down, which could last all day.

This gap down is to the 1900 psychological support level and to the bottom of the 2 day trading range, which is also support. A big gap down sometimes reverses up strongly on the open and is followed by a bull trend day. The bulls need a strong reversal and good follow-through on the open. Otherwise they will need a trading range and then a major bull trend reversal.

Today’s gap is due to a huge surprise, not a gradual, weak selloff. This reduces the chances that today will be a strong bull trend day, and increases the chances for a bear trend. However, with 9 of the past 12 days closing near their opens, the odds are that today will have mostly trading range price action. Most of those doji days had two or more swing trades.

For example, if there is a big tail on the bottom, the Emini had a swing down and then a swing up. If whatever trend that forms in the first two hours is not strong, online daytraders will look for a candlestick pattern that could lead to a swing in the opposite direction later in the day.

The EURUSD rallied sharply a few minutes ago after the unemployment report. The rally was strong enough to make day traders expect a measured move up over the next few days. It is trying to break above the trading range of the past week, and then above the triangle of the past month, and then above the trading range of the past 10 months. However, markets have inertia and are resistant to change, and the EURUSD will need strong follow-through before traders believe that the daily chart is breaking out. The rally on the 5 minute chart is big enough so that the odds are that there will be follow-through buying for at least a couple of days. Online day traders will look to buy today and hold for a swing trade.

The move up was so big that it is far above the moving average. That often results in the market going mostly sideways until it gets closer to the average price before the bulls will aggressively buy again. This means that there might be a lot of trading range price action or a broad bull channel instead of a strong bull trend, but the odds favor higher prices for at least a couple of days.

There is always a good chance that this is a failed breakout of the trading range, and that today could be a bear trend day. However, unless the bears get a strong bear breakout or a trading range that forms a topping pattern, the bulls are more likely to continue to control the market. 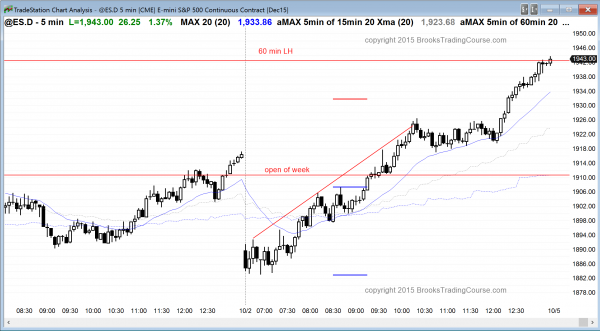 The Emini gapped below yesterday’s low and then rallied to above yesterday’s high in a strong bull trend day. It closed above the 60 minute lower high.

The Emini found buyers below yesterday’s low and then trended up strongly for the test of the day. The buying was climactic so there is a 70% chance of 2 hours of sideways to down trading on Monday. There is often an hour or two of follow-through buying before the pullback begins, and Monday may gap up since the Emini closed at the top of a trading range and there are targets above. I have been saying for over a week that the bulls would probably get a rally to around 1950 – 1970, and today’s price action might be the start of that rally.