The Emini reversed down from a wedge bear flag at the EMA on the open. It sold off to test yesterday’s low and 2600. Since 50% of strong moves on the open fail, the bulls will look for an early reversal up from around yesterday’s low.

The bears want a strong break below 2600, which is where the bulls took control after the early February collapse. This is therefore an important level. That means that the Emini might enter a trading range here before deciding on the direction of the breakout. A strong bear breakout and bear trend is less likely than a trading range or a bull trend today because yesterday was an outside down day at support.

However, the monthly chart is still in a strong bull trend. The monthly bar closes on Thursday because the markets are closed on Friday. At the moment, the month has a bear body, but a tail below. The bears want the month to close on its low.

The bulls would like a rally today and tomorrow. They want a close above the open of the month, but that is unlikely since the open is far above. At a minimum, they do not want the week or month to close on the low.

The next few days are important because they will affect the probabilities for the next month. If the bears get a couple of big bear days, the odds favor a break below the February low. If they break strongly below, the odds of a 20% correction would be about 40%.

Alternatively, if the bulls can hold around 2600, the odds would favor a rally back up to the all-time high.

The Emini is up 5 points in the Globex market. Because yesterday was a huge bear day and today will open near its low, today will probably trade below yesterday’s low. That would trigger a sell signal on the daily chart. Yet, if it reverses up strongly over the next few days from around yesterday’s low, the sell signal will have failed.

Because yesterday was a big outside day, there is an increased chance of an inside day today. Therefore, traders will look for a reversal up after an early selloff to just above yesterday’s low. If so, that could lead to a bull trend day. Since yesterday was huge, the bulls would be lucky to get a rally back to just the middle of yesterday’s range.

If today triggers the sell signal on the daily chart by going below yesterday’s low, there is less than a 50% chance that it would be the start of another leg down.

Yesterday was climactic. Therefore, there is a 75% chance of at least 2 hours of sideways to up trading starting by the end of the 2nd hour. 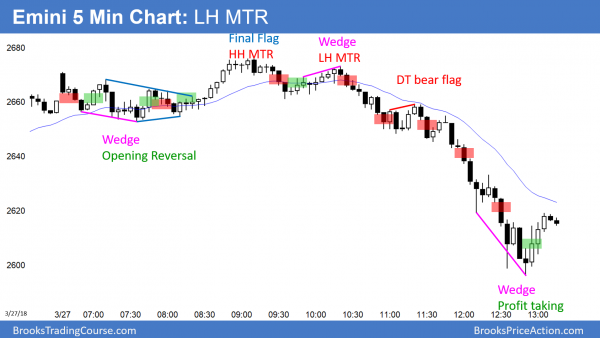 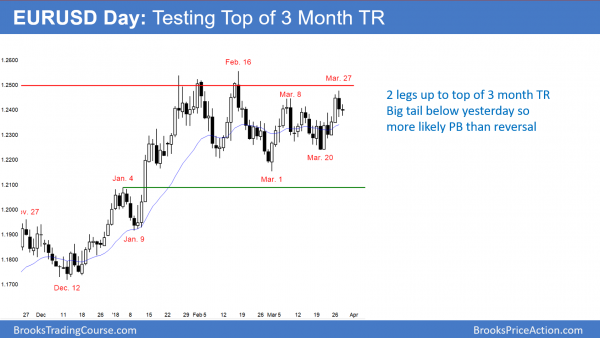 The EURUSD daily Forex chart has had a 3 week, 2 legged rally to the top of the 3 month trading range. Since yesterday had a big tail below and the 3 week momentum up is strong, the rally will probably continue at least a little higher.

The EURUSD daily Forex chart has been in a trading range for 3 months. It was in a strong bull trend last year. Therefore the odds favor a bull breakout. Furthermore, there is a monthly bear trend line around 1.2650. Since that is resistance and it is close, it is a magnet. Consequently, the odds favor a breakout above the range, which is a bull flag on the weekly chart.

However, the range has lasted far more than 20 days on the daily chart. That means that there is almost a 50% chance of a bear breakout on that chart before there is a bull breakout on the weekly chart.

The bears got a reversal yesterday on the daily chart. But, there was a prominent tail at the bottom of the bar and the 5 day rally has been strong. In addition, there is room to the top of the range, which is about 80 pips above yesterday’s high. As a result, yesterday was more likely a pause in the rally than a reversal. If the bulls can hold above 1.2350, they will make another attempt at the top of the range around 1.2550.

The EURUSD 5 minute Forex chart has been in a 40 pip range for 24 hours. Traders are deciding if yesterday’s selloff was the start of a reversal down to the March 1 low, or a pullback from the break above the March 8 high. As long at it holds above 1.2350, the odds are that it is a pullback. That means traders will more likely see a bull breakout within 3 days than a bear breakout.

Since the range has been only 40 pips since yesterday morning, day traders have been scalping. They are waiting for a breakout up or down to swing trade. 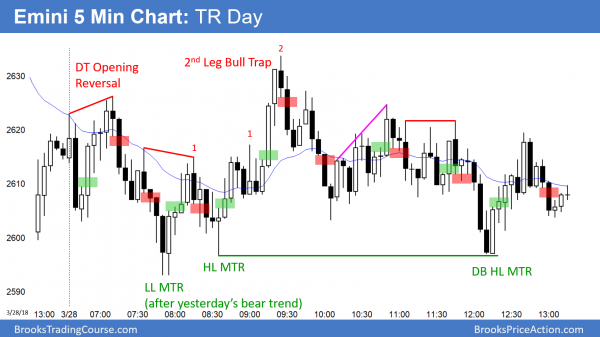 After yesterday’s huge bear day, today was a trading range day. The bears got some trend resumption down in the final hour.

Today was a trading range day after yesterday’s huge outside down day. It closed near the open and was a bear doji day.

The markets are closed on Friday. Therefore, tomorrow is the final trading day of the week and month. Consequently, weekly and monthly magnets will be important, especially in the last hour.