Emini outside down day after Tuesday’s inside day

Yesterday was a big outside down day after Monday’s big bear breakout. The bears want a break below the May 29 higher low, and then a breakout below the 5 month trading range. The bulls 1st want to stop the selling. They want a double bottom with Monday’s low. If the bears get a breakout, the bulls then want a higher low in the broad bull channel that began on April 2.

Tuesday’s reversal up and yesterday’s early rally represent strong bulls. That creates confusion after Monday’s big selloff. Confusion is a hallmark of a trading range. Furthermore, the Emini is back in May’s trading range. Finally, the 4th of July week is usually the 2nd quietest week of the year. Consequently, the Emini will probably go sideways for a few days.

The bears want follow-through selling, including a strong break below Monday’s low. But, today was climactic. Therefore, there is a 75% chance of at least 2 hours of sideways to up trading that begins by the end of the 2nd hour today.

The Emini is down 9 points in the Globex market. It is testing the 2700 Big Round Number. The next support is the May 29 low of 2678.75 and last year’s close of 2684.75. Since a leg in a trading range usually tests major support before reversing, the Emini will probably continue down at least another 20 points within a week.

Since yesterday was so climactic, there is only a 25% chance of another big bear trend today. More likely, the bear channel that began with the pullback to around 2722 will evolve into a trading range today. There is a 50% chance of follow-through selling in the 1st hour or two before there is a swing up. 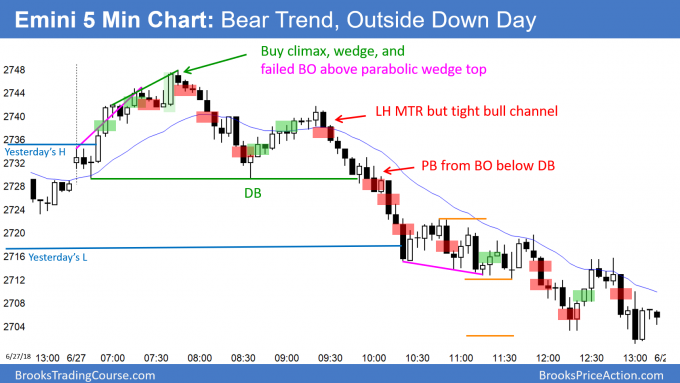 All of the markings on my charts show reasonable stop entry setups. I sometimes also show limit order entries and entries on the close of bars. My goal with these charts is to present an Always In perspective. If a trader was trying to be Always In or nearly Always In a position all day, and he was not in a position at the moment, these entries would be logical times for him to enter. 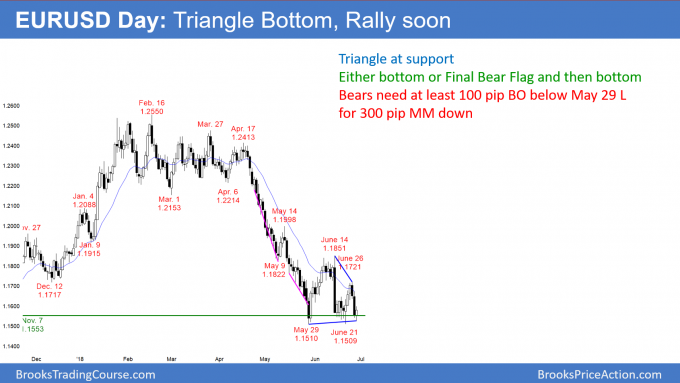 The EURUSD daily Forex chart has a bull body so far today. This triangle is late in a bear trend and at support. It is therefore likely either a bottom or a Final Bear Flag.

The EURUSD daily Forex chart is in a month-long trading range with a higher low and a lower high. It is therefore a triangle. A triangle late in a bear trend is usually the Final Bear Flag. This means that it is a reversal pattern, or the bear breakout will soon reverse up. If there is a bear breakout, the selloff might fall for a 300 pip measured move down. More likely, there would be a reversal up within 200 pips because the chart is at major support.

The bears have a 30% chance that the triangle is a pause in a bear trend that will fall another 1,000 pips over the next year. However, if the bulls get several consecutive bull trend days at some point in the next couple of weeks, the month-long trading range will probably continue for at least another month. This is what is likely.

The bulls want a strong reversal up to above the June 14 high. That is the neck line of the May 29 and June 21 double bottom. They have a 30% chance that there will be a breakout and then a 300 pip measured move up to the March 1 low.

The EURUSD 5 minute chart reversed up 70 pips overnight from another test of the November 7 low. Because the 2 day selloff was strong, the rally will probably not go straight up to Tuesday’s high. However, the odds favor sideways to up for today and tomorrow.

The bears should not have allowed this reversal up from support. It reduces the chance of a bear trend today. Because the overnight rally was not very strong, the bull trend will probably evolve into a trading range today. The bears will sell reversals down from new highs. Additionally, the bulls will buy 20 – 30 pip selloffs and try to get the day to close near its high. Today would then be a buy signal bar on the daily chart. 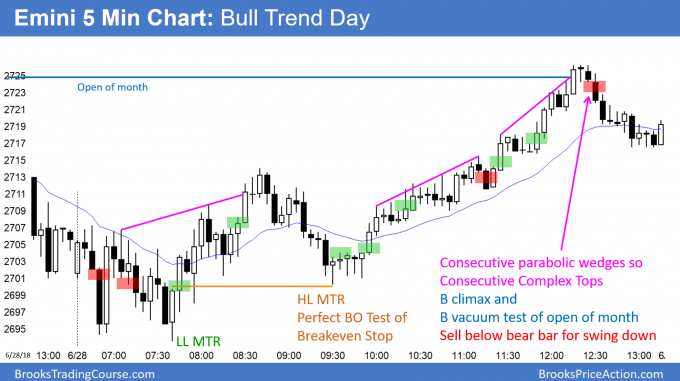 All of the markings on my charts show reasonable stop entry setups. I sometimes also show limit order entries and entries on the close of bars. My goal with these charts is to present an Always In perspective. If a trader was trying to be Always In or nearly Always In a position all day, and he was not in a position at the moment, these entries would be logical times for him to enter.

The Emini formed a micro double bottom with Monday’s low. Since today closed near its high, it is a buy signal bar on the daily chart for tomorrow. In addition, there is seasonal bullishness through July 5.

But, the month-long bear channel is tight and the past 4 days are in a tight trading range. This reduces the chance of a big bull trend day tomorrow.