The Emini began with a tight trading range within Tuesday’s and Wednesday’s range. The bears wanted the reversal down from the top of yesterday’s bull channel to be followed by a test of the bottom of the channel and a closure of the gap above yesterday’s high. They wanted an early start of a bear trend day. The bulls wanted any early sell off to find support and then reverse up from an opening reversal, followed by a bull trend day.

The day began in breakout mode, and it had many dojis. Even though there will probably be one or more swings today, this increases the chances of a lot of trading range price action today and it reduces the chances that any trend up or down will go very far. Traders are waiting for a strong breakout with follow-through in either direction, but they know that whatever swing that happens to form will more likely be a leg within a trading range day. The most important price at the end of the day is last week’s low, which is near the open of the day. Whether the Emini has a swing up or down, that magnet might pull the market back to it by the end of the day and create another doji day.

Although the Emini is Always In Short at the moment, the context is still good for the bulls. They need to create a strong buy signal bar with either a double bottom or wedge bull flag. Otherwise, bulls will wait for the breakout to buy, or for a reversal up after the bear swing ends in a couple of hours. The bears at a minimum are trying to get down to the bottom of the bull channel. They want a bear trend day, but more likely the best they will get is a swing down for 2 – 3 hours. Until there is a strong breakout with follow-through up or down, traders will assume that today will probably be a trading range day.

Pre-Open Market Analysis
S&P 500 Emini: Traders learning how to trade the markets will look for a bull trend

As I mentioned yesterday, the Emini was oversold after 5 days down in a trading range, and it was trying to reverse up from the bottom of the range. Today is Friday and the most important price is last week’s low of 1936.50 because last week’s candlestick pattern was a sell signal bar in a bear flag, and the short triggered when the Emini broke below that low.

The bulls want this week’s candlestick pattern to be a bull reversal bar, which would be a rejection of the bear breakout. The two strongest things that the bulls could do this was was close above last week’s low and close well above the open of the week, creating a bull reversal bar on the weekly chart. The week’s open was 1956.50, which will be a magnet today.

I have been saying that the selloff was probably going to create a double bottom on the daily chart with the September 1 low, and it did that with yesterday’s reversal up. I also think that the rally will fail around the 2080 area, which was the double top of August 28 and September 9. If so, a reversal down would create a head and shoulders top bear flag.

There is a 60% chance of a 2nd leg down in the bear market on the daily chart, and that lower high, if it forms, would be a reasonable sell setup, especially if the rally has strong bull trend bars, which would trap bulls. The problem with the selloff of the past week was that it was composed of 6 doji bars, and that made it look more like a bear leg in a trading range than the resumption of a bear trend. Also, the weekly sell signal was in a tight trading range that contained two consecutive dojis. This was more likely a sign of acceptance of the current price, not a rejection of it as being too high.

The Emini is up 23 points in the Globex market and about 10 points below last week’s low. The odds are that it will gap up and form an island bottom above yesterday. Island bottoms in trading ranges have very little predictive power because traders already know that the Emini was likely to reverse up from the bottom of the range. What we do not know is if the bulls will close above last week’s low and at this week’s high. If the bulls are strong, they will create a trend day today and achieve their goals. The context is good for a bull trend day. When there is a big gap up, there is often a move up or down for an hour or so and then a trading range. The Emini usually has a difficult time trending until it first tests the moving average, and it can get there by going sideways or down. Bulls will look to buy a reversal up from a double bottom or a wedge bull flag. If instead the Emini rallies from the open, they will buy the rally.

Although the context favors the bulls, the Emini is in a trading range, and trading ranges routinely disappoint traders. The bulls could be disappointed today by a lack of early buying, and the bears have a chance of a failed breakout above yesterday’s high and then a reversal down in a bear trend day. Traders learning how to trade the markets should be aware of this and be prepared to swing trade their shorts if this happens. It is not likely, given the context, but because it is unlikely, it can create a possible “Pain Trade” and sell off relentlessly all day. Those who trade for a living will be quick to accept the bear trend, if it develops. Unlikely, yes, but possible. The odds are that today will either be a bull trend day or another doji day, like the past 6 days.

The major Forex markets were in trading ranges overnight, except for the USDJPY, which rallied. It is breaking above the bear trend line at the top of the month long triangle on the daily chart. A strong breakout above a triangle has a 50% chance of being the start of a swing up, and a 50% chance of reversing down. The follow-through bar is important because it significantly can change those odds. Today is the breakout. The bulls need a strong close today. If they get it, they then need a strong bull trend bar on Monday. If they are successful, the odds would favor a test of the August high.

There is a 50% chance that the breakout will fail today or Monday. If so, the month long tight trading range will continue. The 60 minute chart last night formed the 3rd push up in a 2 day parabolic wedge top at the top of the trading range. This is not what the bulls want to see. A buy climax like this typically is followed by a pullback that can last 5 – 10 bars, which means that today might evolve into a trading range on the 5 minute chart.

As long as the USDJPY stays mostly sideways, the bull case is still intact going into Monday. If instead it begins to trend down strongly today and today closes far below its high, then the bull breakout will probably fail. The overnight bull trend was strong enough so that bulls can still hold their longs for a swing until there is a strong reversal down, but the odds are that today will be mostly sideways, and most online day traders will probably scalp. Unless there is a strong reversal down, the probability is better for buy scalps than for shorts.

The other major Forex crosses are in trading ranges that are too tight for most traders to trade. Day traders will hope for a breakout up or down for a 10 – 20 pip scalp. Otherwise, they will buy below bars a the bottom and sell above bars at the top and try for 10 pip scalps. 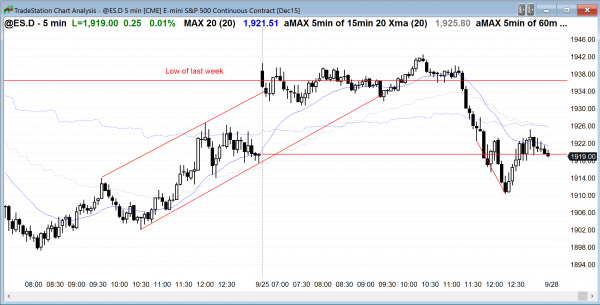 The Emini spend most of the day in a tight trading range around last week’s low, but had a late bear breakout.

The day was a small trading range day that oscillated around last week’s low for 4 hours, as expected. It had a late selloff, but it did not get near the low of the week. This is a neutral candlestick pattern on the weekly chart and it does not give useful information for Monday.

Since the Emini reversed up from the bottom of the month long trading range yesterday, it probably will work higher for several days. It might test down one more time first because there is still room to the bottom of the range. Nothing has changed. There is a 40% chance that there will be a bull breakout and a new all-time high, and a 60% chance that there will be a bear breakout and a test of the bear low.