Yesterday was a broad bull trend channel, and today had a new high on the open. The bulls want a rally above last week’s all-time high. The bears want a 60 minute major trend reversal after yesterday’s gap bars.

Channels evolve into trading ranges 75% of the time. In 25% of bull trend channels, there will be a bull breakout and the bull trend will once again be in breakout mode. It will be a stronger channel, rather than a weaker one.

The odds are that this rally will soon evolve into a trading range, but if the current breakout has strong follow-through, traders will begin to trade it like a new breakout and they will be willing to buy new highs. If they believe that it is still a channel, which is more likely, they will sell new highs and eventually the trend channel will have enough sellers to convert into a trading range.

For bears to swing trade, they need a strong signal bar at a new high, which would be a higher high major trend reversal, or a strong bear breakout. Until then, bears will only scalp by selling above new highs.

The odds are that this breakout will fail and pullback. It might then generate enough selling pressure to create a major trend reversal. Since all bull breakouts yesterday were followed by trading ranges that lasted an hour or more, that might happen again here. Since the market is at the top of a channel that has lasted a long time, traders will look for an early high of the day, and then a trading range day. Until then, the Emini is still in a bull trend channel. 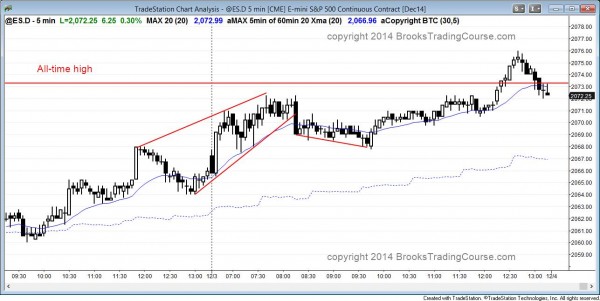 The Emini tried to reverse down after the first 2 hours, but when it failed to breakout to test the low of the day, it instead reversed up to a new high of the day. It failed to close above the all-time high.

The Emini was in a bull channel yesterday so the odds favored the evolution into a trading range today. Although there was a strong bear breakout bar at 8:15 a.m. PST, the follow-through was weak. After 5 attempts to break out to a new low of the day and to turn the day in to a trading range day, the bears gave up. The Emini became a small pullback bull trend day and broke above the high of the day and the all-time high. However, it failed to close there.

The 60 minute chart had a moving average gap bar yesterday. When one forms late in a bull trend, it has about a 60% chance of leading to the final rally before a major trend reversal triggers. The 60 minute channel is tight and the 60 minute chart will probably have to go sideways for several bars before it can generate enough selling pressure to create a credible major trend reversal. However, that is what will probably happen tomorrow. The market might enter a trading range going into Friday’s unemployment report.