The Emini opened with quiet trading, which was likely after yesterday’s buy climax. The pullback began in the final hour yesterday, and the bulls see this as a pullback after an overdone rally. The bears are hoping that the rally was the 3rd push up on the 60 minute chart and a wedge lower high major trend reversal. Since the breakout above resistance was so big yesterday, the odds favor the bulls. This means that even if the market trades down for several days, it will probably have a 2nd leg up and test the all-time high.

At the moment, the market is in a leg down, but there is bad follow-through selling and the bears have yet to keep a gap open. This means that this selloff is more likely a bear leg in what will become a trading range. They did not have a strong sell signal bar, nor have they had consecutive strong bear bars.

However, the bulls have not yet had a strong reversal, despite gap bars (bars with highs below the moving average). Is the market always in short? Despite a 20 point selloff, the bears have not yet done enough. I think that it is still always in long, but that bulls need to wait for a strong bull reversal with follow-through or a better base before looking for swing trades. This is probably going to be mostly sideways for an hour or more, and possibly all day. It looks like the first several hours of yesterday, which was a limit order market.

My thoughts before the open: Pullback after a buy climax

Yesterday was an exceptional day and that breakout on the FOMC report will probably have follow-through buying for several days. However, the day was climactic and there is a 70% chance of at least a 2 hour sideways to down move today. There is often some follow-through buying for the first hour or two, but today will probably not be a strong trend day up or down. However, traders learning how to trade the markets always have to be aware that unlikely things are never that unlikely and can happen at any time. If there is a strong breakout with follow-through, up or down, swing traders will hold for swing profits. 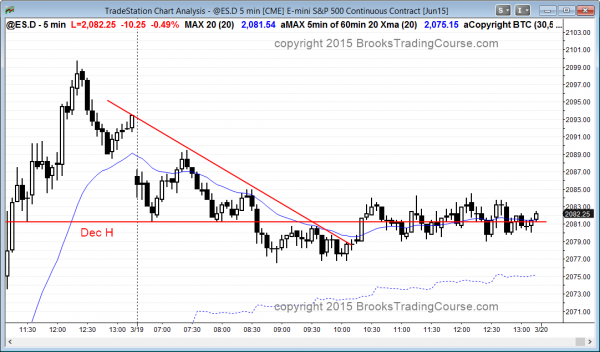 The Emini pulled back to the December high and spent the day there in a trending trading range day.

This is the 60 minute chart of a similar move after the FOMC meeting of December 18, 2013. You can see the big bull breakout and the follow-through over the next several days.

Tomorrow is Friday and weekly support and resistance can be magnets, especially at the end of the day.