The Emini got follow-through selling on the open, which happens about 50% of the time when there is a big gap down. There is a 75% chance of a trading range or early low of the day and only a 25% chance of a continued selloff. If there is a 2 hour trading range, the bears might be able to get trend resumption down after a double top bear flag or a triangle. However, the odds now favor a sideways move for at least a couple of hours. The bulls should not swing trade unless there is a strong bottom, like a major trend reversal, or a strong reversal up. The bears probably will scalp as well for the next couple of hours, believing that the selling to this point is climactic and probably will end now or soon for at least a couple of hours.

On the daily chart, the Emini reversed down from a double top with the February 1 high, which is the neck line of the double bottom. When the reversal down occurred on February 1, I said at the time that there might be a deep pullback and a trading range, but the odds favored a test back to that level before a new low. That was because the rally was so strong. Usually the Emini has to test the resistance level 2 or more times before the bear trend resumes. The same is true of Monday’s high.

The rally up to Monday was so strong that the Emini will probably have to test up there at least one more time before there is a break below the 2 year trading range. Everyone is aware of the double top, which is a double top bear flag and it could easily lead to a quick resumption of the bear trend on the daily chart. However, it is still more likely that the Emini will do what it typically does at resistance, and test it at least one more time. This means that the Emini will probably bounce from the support of Friday’s low, 1900, and the moving average today or tomorrow.

The Globex market is down about 20 points with an hour to go before the day session opens. If it opens down here, it will gap down. This will create a 5 day island top with the February 17 gap up. Island tops and bottoms can lead to major reversals. This one is in a 2 year trading range, and therefore it is minor, which means it will more likely just lead to a leg down, which will then be followed by a leg up.

Gaps up and down are common within trading ranges and there have been many island tops and bottoms over the past 2 years. All led to minor reversals, not a breakout of the range.

Monday is the last day of the month, and what takes place between now and Monday’s close affects how bullish or bearish the candlestick pattern will be on the monthly chart. The nearest monthly magnets are the high of the month (Monday’s high around 1940) and the open of the month at 1919.25. Both are above the current price, and are magnets that therefore increase the chances of a bounce over the next few days.

Because today will have a big gap down to a support level, online day traders should be ready for an early low of the day and a rally. It is impossible to know at this point if the rally will create a bull trend day or simply be part of a trading range day. However, there is a 70% chance of a rally up from support today, either in a bull trend or a trading range.

There is a 30% chance that the big gap down will break strongly below support and form a big bear trend day. There is often follow-through selling for the 1st hour or so when there is a big gap down. When there is, it usually stalls and the Emini then has to go sideways to up to the moving average before it decides to resume down or reverse up.

Just as the daily chart of the EURUSD was overbought at the high 2 weeks ago, it is oversold now, and it is at the support of the top of the January trading range. The selloff was in a tight bear channel. This makes it likely that it will have to go mostly sideways for several days before it can reverse up very far. The selloff was strong enough so that the 1st reversal up will probably be sold. Desperate bulls will use a rally to exit their longs with a smaller loss, and bears who missed the short are eager to sell a rally for at least a test back down. The bounce should begin today or withing the next few days.

Resistance is around 1.1100, which should have been support on the way down. There are many scale in bulls who hope to get out around that level. They bought support and scaled in lower, or will scale in on the reversal up. They then will try to exit the trade with either a small profit or around breakeven. This means that the bulls will look to sell around the 1.1100 area. The bears know this and they will sell there as well, expecting that the absence of buyers there (remember, the bulls want to sell there to take profits) will result in at least a trade down.

Is it possible for the tight bear channel of the past 3 weeks to continue down to below the January 5 higher low without a significant bounce? Day traders know that anything is possible, but that is very unlikely. The bears got a bear breakout below the bear channel on all time frames from 1 hour to 1 day. There is a 75% chance that the bear breakout fails within 5 bars.

The highest time frame with the pattern is the daily chart. This means that there is a 75% chance of a reversal up to the top of the bear channel within 5 days. The channel is very tight so the target is not far. The top of the channel today (you can see it on the 60 minute chart) is just below 1.1100, which is also the resistance level that I mentioned above. This means that there is a 75% chance of about a 100 pip bounce before there is much more down, like maybe a 100 pip selloff. The math is good for the bulls over the next few days.

Remember, there is still a 25% chance that the selloff will continue much longer without the bounce. The odds favor the bulls, but they do not guarantee that the bulls will be successful. 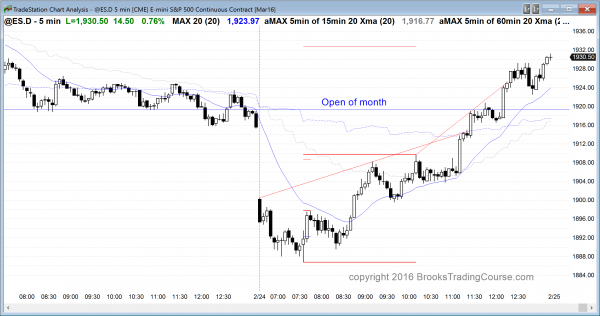 As expected, there was an early low of the day. The day rallied strongly back up to the target of the open of the month.

The Emini had a 2 day pullback from its test of the February 1 high, as I mentioned it probably would. It will probably go above Monday’s February high either before or after the month closes on Monday.

Since February will be a buy signal bar on the monthly chart, the Emini will probably trigger the buy next week by going above February’s high. It is too early to know if the breakout will go far, like it did in October 2015. It probably will not. The odds still favor a break below the February low before a break to a new all-time high.

Through Monday’s close, the odds are that the Emini will be sideways to up.