Yesterday’s breakout was strong enough to have a 3rd push up today. While the pullback from the breakout overlapped the breakout point, the overlap was not too much. Therefore the gap might be a Negative Gap. Hence, it still might result in a Measured Move up.

Open of the week is a magnet

Since the Emini has had 7 consecutive bull bars on the weekly chart and that is rare, this week will probably be a bear bar. Yet, the 2184.75 open of the week is close enough so that the Emini will probably test it today or tomorrow. If so, it will then probably pull back and close below it.

At the moment, the Emini is deciding whether to pull back and test the 2175 pullback low, or continue up to above the open of the week. If it tests down to that pullback that formed after yesterday’s rally, it will probably form a double bottom and enter a trading range.

Yesterday reversed up strongly from the daily moving average and from a breakout below last week’s low. Yet, the rally stalled at the 60 minute moving average. The bears want a Lower High Major Trend Reversal on the 60 minute chart. Hence, they expect a Head and Shoulders top.

The bulls want to close the gap above Tuesday’s high. They then want to test the targets around 2200. Because the Emini has been in training range for 8 days, the odds are about the same for the bulls and bears.

Until the bears get a strong bear breakout, the odds still favor a test of 2200 within a couple of weeks. Yet, because of the buy climaxes on the daily and weekly charts, the odds also favor a 50 – 100 point pullback whether or not the bulls reach 2200.

While yesterday was a good buy signal bar at support, there was no urgency to buy overnight. The Emini was sideways, and it now down 3 points, The lack of follow-through is typical in a trading range. The Emini has been sideways for 9 days. 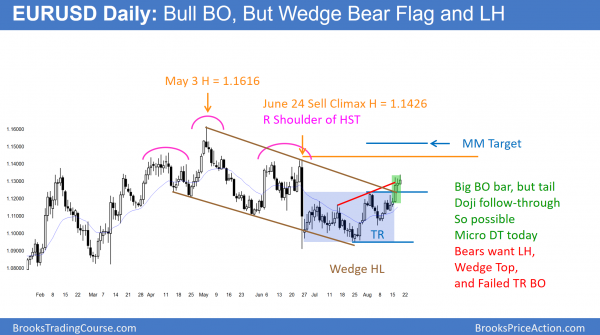 Tuesday’s breakout had a tail and yesterday was a doji day. Hence, that hesitation increased the chances that there would be sellers above the highs of both days. The bears today will try to create a Micro Double Top with Tuesday’s high. That would therefore be the sell setup for the Wedge rally. The bulls want Tuesday’s gap to stay open and be a Measuring Gap.

The EURUSD yesterday formed a big doji bar on the daily chart. Hence, it was disappointing follow-through for the bulls after their breakout on Tuesday. Yet, it is also a low probability sell signal bar for the bears, who are hoping that the breakout above the trading range will fail. Traders are therefore confused. Because confusion is a hallmark of a trading range, the EURUSD might go sideways for another day or two.

When there is a doji follow-through bar, especially when the entire chart is in a trading range, the odds are that there are sellers above. Yet, the bulls are hoping for a big bull trend bar today or tomorrow. More likely, the EURUSD will start to pull back today or tomorrow. It is still deciding whether Tuesday’s breakout will succeed or fail. This hesitation means tht the probability is 50% for the bulls and bears.

The rally on the 240 minute chart is a big Leg 1 = Leg 2 move up from the July 2 low. Further more, the 2nd leg, which began on August 5, has a series of buy climaxes. This increases the chances of a couple of legs sideways to down over the next couple of days. 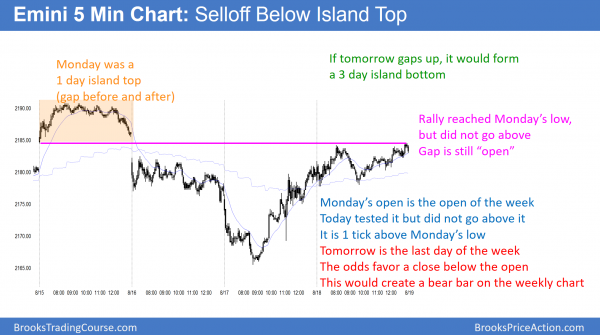 There was weak follow-through buying for the 1st 2 hours that failed 1 tick below the top of the gap down on Tuesday. The Emini formed a trading range until the final hour when it rallied again and reached Monday’s low, but failed to get above that low. The gap is therefore still open.

While the weekly chart is in a bull trend, the rally is climactic. Seven consecutive bull bars is unsustainable. Therefore this week will probably have a bear body. Hence the open of the week is a magnet tomorrow. The bears want tomorrow to close below the 2184.75 open of the week to create a bear bar on the weekly chart. Yet, the trend up is still strong and the bears will probably need at least a week or two of sideways prices before they will be able to take control.