While today gapped down and formed a 3 day island top, the gap was small. In addition, the bears lacked consecutive big bear bars closing on their lows. Hence, they lack conviction. As a result, the odds are they will prefer to sell closer to the average price.

The bulls were unable to create an immediate strong reversal up from below yesterday’s low. Yet, they were able to halt the selling. This is probably a trading range open. It therefore increases the odds of a trading range for the 1st hour or two. In addition, it makes another trading range day likely.

The bears failed to form a big gap down on Friday. They therefore were unable to create a strong 2 day island top. Hence, traders believe that the top might need more time.

Thursday was a big buy climax bar. Furthermore, it was at the 2400 big round number. In addition, it was in a cluster of measured move targets based on the 2014 – 2015 trading range. Hence, the Emini will probably go sideways for a few days.

In addition, the FOMC announcement is on March 15. Since the Fed might change its policy and begin to increase interest rates, this meeting could lead to a big move. Because the Emini is far above its weekly moving average, a big move is more likely to be down.

The Emini is down 7 points in the Globex market. If it gaps down, it will therefore create an island top. In addition, that top would contain last week;s dramatic climactic reversal, Furthermore, the top would be at the major resistance of a measured move up from a 2 year Final Bull Flag. Finally, it would be at the added resistance of the 2400 Big Round Number.

The bigger the gap down at any point this week, the higher the odds of a reversal down to the December close will be. If the gap is small, it is more likely to lead to a trading range, rather than a 150 point sell.

Because the February rally was in a tight bull channel, the odds still favor at least a micro double top before the correction begins. That means the odds favor at least a small trading range. In addition, the Emini will probably be mostly sideways into next week’s FOMC meeting and likely Fed interest rate hike.

Yet, the Emini is in a buy climax at resistance on the monthly chart. Hence, a sharp reversal down can begin at any point. While the Emini is in a strong bull trend on all higher time frames, the odds are against much higher prices without at least a small pullback first. Please see my weekend blog. 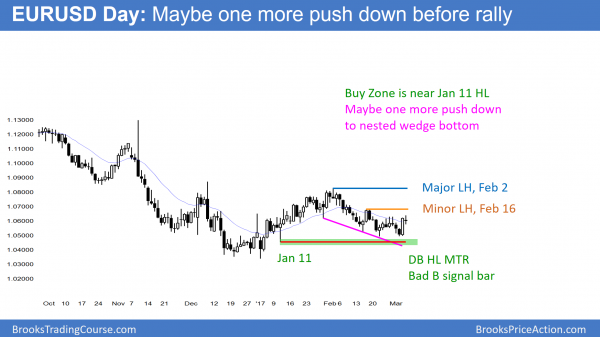 The EURUSD daily Forex chart has a double bottom with the low of 3 weeks ago. Yet, Friday’s buy signal bar. The bottom therefore has a lower probability of success. In addition, this small is the 2nd bottom of a double bottom higher low major trend reversal. Because it is so close to the January 11 major low, the odds are that it will test a little lower.

The EURUSD weekly chart Forex chart rallied relentlessly from a new 15 year low. It had 6 bull trend bars closing above their midpoints. While the bears see the 4 week selloff as a resumption of the bear trend, the bulls seee it as an approximate 50% pullback. Furthermore, it lacked consecutive strong bear trend bars. The rally was stronger than the selloff. In addition, it broke above the bear trend line from the November high. Thus, the odds favor a credible attempt at a major trend reversal.

Is this a higher low major trend reversal on the daily chart?

Is last week’s rally credible? The buy signal bar from the week before was a bear trend bar and therefore low probability. In addition, the selloff got to within 40 pips of the January 11 major higher low. Hence, it probably probably cannot escape the gravitational pull of that support unless it gets to within 5 ticks or so. Alternatively, it could break below it and reverse up.

Since the daily chart is an breakout mode, traders have to be ready for a strong breakout at any point over the next couple of weeks. Because the chart is deciding between a move down to par or up to the top of the 5 month range, the breakout could lead to a swing that could cover hundreds of pips and last many weeks.

The EURUSD Forex chart has been in a 30 pip range for the past 4 hours. In addition, it is at the top of a 10 day trading range. The odds are that today will be mostly sideways. 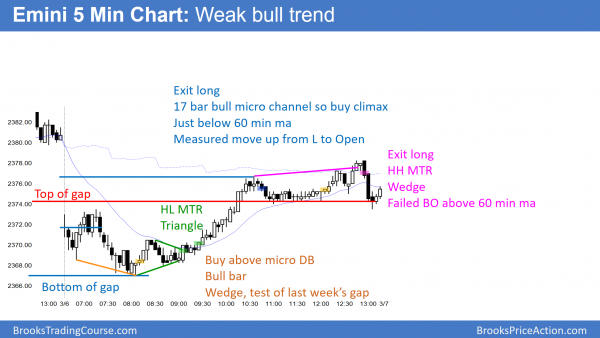 The Emini reversed up from a test of the bottom of last week’s gap. The rally closed today’s gap down. Today was a weak bull trend day.

While the Emini gapped down, it rallied from the bottom of last week’s gap up to close today’s gap down. After a 3 day pullback, the bulls have a good buy signal bar on the daily chart tomorrow. Yet, the odds still favor mostly sideways trading into next week’s FOMC meeting and likely Fed interest rate hike.