While the Emini gapped up to a new all-time high, the 1st several bars hesitated. In addition, the open was the low of the day. That rarely lasts and therefore the odds are that the Emini will trade below the low at some point today.

While the Emini is Always In Long, this is not a strong bull open. Hence, the Emini will probably enter a trading range soon. It sometimes rallies for a hour before starting a trading range.

The bears want a 2nd reversal down, which could lead to a swing down. Because there was not a strong selloff on the open, the odds are against a strong bear trend day. The best the bears will probably get is a bear leg in a trading range.

The Emini turned down from a 5 day expanding triangle on the 5 minute chart yesterday. Furthermore, the ii on the daily chart was probably the start of a trading range.

Because of the uncertainty of the Fed interest rate hike at the March 15 FOMC meeting, the Emini will probably be in Breakout Mode before the report. Hence, the odds are against a continued move up near term. Furthermore, the February rally was strong enough to make a selloff unlikely without at least a small trading range first.

Therefore, the Emini will probably be sideways over the next week. While it could have strong trend days, those are less likely when the daily chart is in a tight trading range.

Gap up on the open

The Emini has gapped up many times over the past 4 weeks. While that is a sign of a strong bull trend, it is also climactic. It therefore can lead to a sharp pullback at any time. A big gap up has an increased chance of a trend day up or down. While it often leads to a rally on the open, that rally usually stalls and pulls back within an hour. Once the pullback gets closer to the moving average, the bulls will look to buy a test of the open. That would therefore be a double bottom. A rally on the open makes a bull trend day likely, whether or not there is a test back down to the open and near the moving average.

The bears will try to create a reversal down on the 1st or 2nd bar. If they get 2 or 3 consecutive big bear trend bars closing on their lows, the odds of a strong bear trend day would be about 50%.

The bears can also get a top if there is a rally on the open that has 3 pushes up and forms a parabolic wedge top. When that happens, the Emini usually pulls back for about an hour. The bulls have a 50% chance of trend resumption up. If the bears get 2 big bear trend bars, that bear breakout below the bull flag would make a bear trend day likely.

The 4 week bear trend resumed overnight after another lower high. The bulls want a reversal attempt up from a test of the January 11 low.

The EURUSD Forex market resumed its 4 week bear trend yesterday. The bulls want a reversal up from a test of the January 11 higher low. That reversal would also create a wedge bottom over the past month. Hence the reversal would have a higher probability of a rally up to the top of the 5 month trading range at the February high.

Yet, the bears want a strong breakout below that support. Furthermore, they want to drive the market below the January low. Hence, that would be a new 15 year low. In addition, it would make a test of par (1.0000) likely this year.

After Trump’s speech last night, the stock market rallied and the bond market sold off. In addition, the 4 day rally in the EURUSD revered down from a lower high double top bear flag with the February 16 high. The bears will probably get a break below the neck line of the double top. That is last week’s low. They then hope for a measured move down. Hence, they expect a test of the January 1.0453 low, which is about 70 pips below.

While the EURUSD Forex market sold off about 70 pips since the speech, it did so in a series of small sell climaxes on the 60 minute chart. That is trading range price action. It therefore means that the bulls still have about a 50% chance of a reversal up from around the January 11 low.

Furthermore, the selloff over the past 5 hours has been in a weak bear channel. It therefore looks more like a leg in a trading range rather than a resumption of a bear trend. Hence, while the odds favor more selling over the next week, they also favor an attempt at a bottom at around 1.0450. In addition, the overnight selloff will probably bounce around last week’s, which is only 20 pips lower. 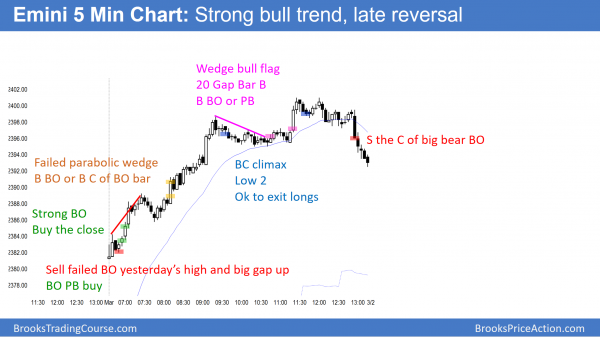 The Emini had a strong trend from the open bull trend. The open of the day remained the low of the day, which is unusual. While the day closed near its high, it was mostly sideways for the final 4 hours.

After a big gap up, the Emini rallied relentless for several hours. There is a 50% chance of follow-through buying during the 1st 2 hours tomorrow. Furthermore, there is a 75% chance of at least a couple of hours of trading range trading, beginning by the end of the 2nd hour.