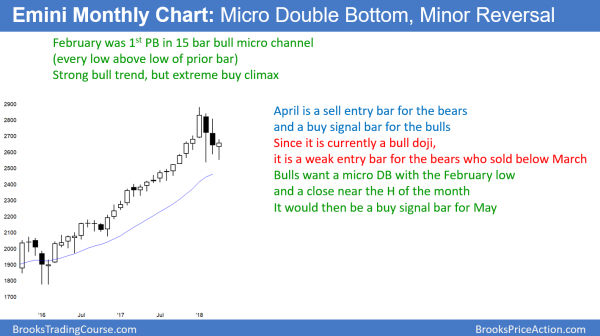 The monthly S&P500 Emini futures candlestick chart so far this month is a bull reversal bar. The odds favor a resumption of the strong bull trend either this month or next. Yet, the 20 month exponential moving average (EMA) is a magnet and it is not far below. Consequently, the pullback might continue down to the 2450 area before the bull trend resumes.

The monthly S&P500 Emini futures candlestick chart has pulled back for 3 months in a strong bull trend. Through January, the bulls had 15 months without a pullback. While unsustainable and therefore climactic, it also means that the bulls were aggressive. The odds are that the current reversal down will fail and the bulls will buy again soon.

Normally, the 1st pullback from a bull micro channel lasts only 1 – 3 months. Because the stock market has never been this overbought in its 100 year history, the pullback could last longer. If April closes on its high, it will be a buy signal bar for May. Furthermore, it would probably be the end of the pullback.

Alternatively, if the Emini collapses into the end of the month, then it will probably fall to the 20 month EMA. Since it would probably go at least a little below, a minimum target would be about 2450. 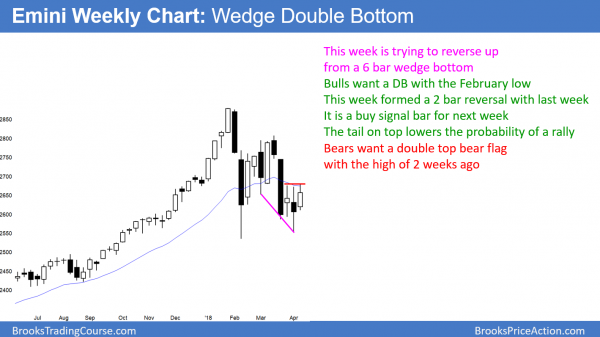 The weekly S&P500 Emini futures candlestick chart had a bull trend bar this week. It is a buy signal bar for next week for a double bottom with the February low.

The weekly S&P500 Emini futures candlestick chart reversed up this week after last week’s higher low double bottom with the February low. Furthermore, there was a 6 week wedge bull flag at last week’s low. If the bulls get a strong bull trend bar next week, then the odds are that the rally will continue up to the March 13 lower high at around 2800. That is around a measured move up based on the height of the 3 week tight trading range.

The bears want a Leg 1 = Leg 2 measured move down

The bears need more than a reversal down next week. They need a strong break below the February low before traders believe that the Emini will have another leg down. Their 1st target would be a Leg 1 = Leg 2 measured move. Leg 1 ended with the February 9 low, and it was 345 points tall. Leg 2 began with the March 13 high of 2807.25. The leg 2 target therefore would be around 2462.25. Hence it would be around the 20 month EMA, which is a target on the monthly chart. 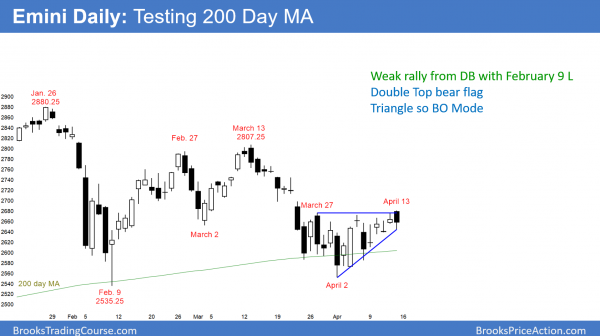 The daily S&P500 Emini futures candlestick chart today reversed down from a small break above a 3 week triangle. It is still in Breakout Mode.

The daily S&P500 Emini futures candlestick chart has been sideways for 3 weeks. Today reversed down from a small breakout above the triangle. But, it closed back above yesterday’s low. The chart is still in breakout mode until there is a clear breakout up or down. The next few days will give information about what the next couple of weeks will do.

The bulls want a reversal up from a test of the February low and the 200 day moving average. However, the bulls need consecutive bull bars closing near their highs and above the triangle. If they get that, the odds would favor a test of the March 13 major lower high, which is above 2800.