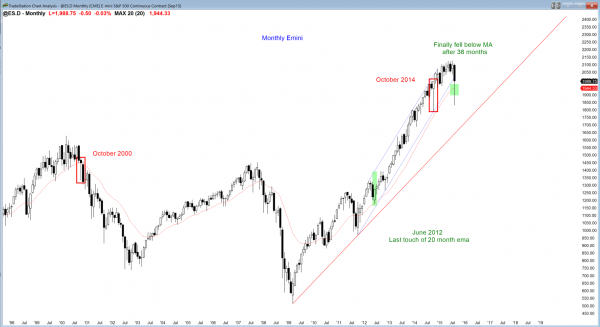 The monthly S&P500 Emini futures candlestick chart pulled back to the moving average and found “20 gap bar bulls”. Will this be more like October 2000 or October 2014?

I have repeatedly written that the odds were 80% that there was going to be limited upside this year until after a pullback below the monthly moving average, which finally happened this week. Staying above the moving average for many bars is unsustainable and therefore climactic behavior.

What typically follows a buy climax? A trading range is most likely. Although there is a natural temptation to compare this selloff to the one in October 2014, there are differences. The most important one is that the current pullback is in an extremely overbought market. Will one bar down be enough to correct the overbought condition? Probably not. However, 2 – 10 bars will be enough.

Why not compare this month to October 2000? That was also a big selloff and the bear breakout bar closed above its midpoint. However, unlike October 2014, a huge selloff followed.

So which October will this current selloff resemble? Probably neither. The rally is strong enough so that the risk of a big selloff without first entering a trading range is small. The buy climax was extreme enough so that the chance of an immediate resumption of the bull trend is small. The bulls will probably be hesitant to hold long-term positions for at least several bars on the monthly chart, which means that they will take quick profits for at least a couple of months. That lack of conviction will probably limit the upside for the next couple of months.

The bar on the monthly chart was huge, and Monday is the final day of the month. August will probably close in the middle third. Give how big August was, there is probably a 60 – 70% chance that September will be an inside bar. This means that it will not trade above the August high or below the August low. An inside bar is a trading range bar, and that will extend the trading range to a 2nd month. 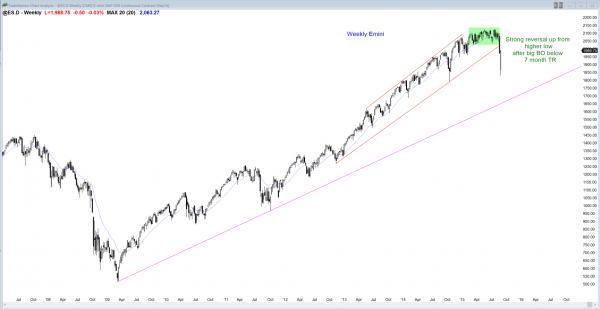 The weekly S&P500 Emini futures candlestick chart broke strongly below its 7 month trading range and 2 year bull channel, but reversed up sharply this week and is testing the breakout points.

While it is possible that this reversal up leads to a strong breakout to a new all-time high, it is more likely that the bears will sell once it gets near the bottom of the 7 month trading range. Bulls who failed to exit as the selloff began will look to sell out on a rally to reduce their losses. With both bulls and bears selling, the odd are that the reversal up will fail. If it does, it could create a major trend reversal, like a head and shoulders top. 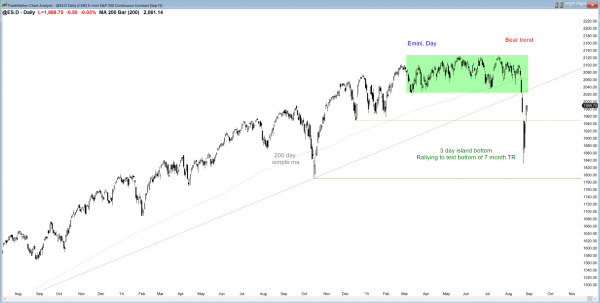 The daily S&P500 Emini futures candlestick chart reversed up sharply from above the October low, and has retraced more than 50% of the bear trend.

The daily S&P500 Emini futures candlestick chart is in a bear trend, but it is also rallying strongly up from a double bottom with the October low and a 3 day island bottom. As strong as the current rally has been, unless the bulls are able to move the Emini above the top of  the current bear leg at 2100, this rally is at best a bull leg in a developing trading range.

The bears took windfall profits this week. Most of the bulls who bought will also probably take windfall profits over the coming week, and the bears will come back to sell again when the Emini gets to around the bottom of the 7 month trading range, which is around 2050.

V bottoms are extremely rare and are almost always something else. The one from October was a parabolic wedge sell climax. The current one had no pause on the way down, and that lack of buying pressure during the bear phase will make most bulls hesitant to hold onto their positions. They will want to see a test down to around the lowest close of the selloff, which occurred on August 24 and it was at 1871.25.

The current rally could last for weeks, but the odds are that bears are scaling in because they have a strong belief that the Emini will test that lowest close before it goes above the top of the bear leg, and they are probably right. Once it tests that close, traders will pay attention to what happens there. Will it collapse below the close? If so, the Emini will probably fall below the October low, and the correction will probably be around 20%. This happened in 1997 after the last time the S&P was above its moving average for this long. If instead it hesitates at the lowest close, it might form a double bottom there, which could be a major trend reversal and the end of the bear market on the daily chart.

Can this be the start of a bear trend on the monthly chart? That is unlikely. However, traders will watch the current rally on the daily and weekly charts to see if it begins to form a right shoulder of a head and shoulders top. Although the chance of a trend down from a top is usually only 40%, traders will be ready to sell for a swing trade if there is strong downside momentum. Most tops fail to reverse the market and instead become bull flags. It will take at least a couple of months before the bears know if they will have their top.

The daily chart of JPM and many other stocks have probably seen the low of the selloff, even though this is less certain for the S&P cash index and most stocks.

Even though it is unclear whether the Emini has seen the low of this bear trend, many stocks almost certainly have seen the low. JPM is an example. The selloff was exceptional, but so was the reversal. When the bulls are that eager to buy such a severe selloff, the odds are high that they will buy any further selloff, and that they will buy well above this week’s low. The best the bears can realistically hope to see over the next many months is s test down.