Monthly S&P500 Emini futures candlestick chart:
March will probably be an inside bar on the monthly chart 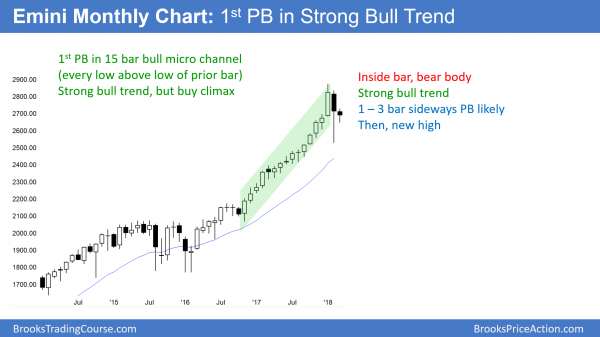 The monthly S&P500 Emini futures candlestick chart opened in the middle of February’s range. Since February was huge, the odds are that March will form an inside bar.

The monthly S&P500 Emini futures candlestick chart had a huge bar in February. In addition, February closed in its middle third. That means that February’s high is far above and its low is far below. Consequently, March will have a difficult time reaching either. As a result, March will probably form an inside bar on the monthly chart.

February was the 1st pullback in a 15 month bull micro channel. That is an extreme buy climax. Yet, buy climaxes usually lead to pause in the trend and not a reversal. Consequently, the downside risk over the next few months is not great. There is only a 20% chance of a major reversal without the bears first getting at least a micro double top.

Furthermore, once there is a pullback in a bull micro channel, the odds are that the bull trend will resume at least a little within 3 bars. This means that the bulls will probably get a test of the January all-time high within a few months.

Because the 15 bar micro channel is the most extreme in the 100 year history of the stock market, the Emini might go sideways all year before the bulls recover from their exhaustion. If the Emini is sideways all year, there will be 50% chance that 2018 will be a down year. This is because, if it is sideways, the December 2017 close will probably be in the middle of the range. Since a sideways market is neutral, there would be about a 50% chance that the year would close above its middle and a 50% chance it would close below.

This hinges on 2018 being sideways all year. At the moment, the odds still favor at least one more new all-time high. But, the February selloff was extreme enough to tell us that the bears are strong. Consequently, the bulls will be less willing to buy at a new high.

This will probably limit how high any rally will go this year. Instead, that strong selling increases the chances of a lot of confusion about whether the bulls are still in control. As a result, the odds favor a lot of trading range trading for many months and possibly all year. 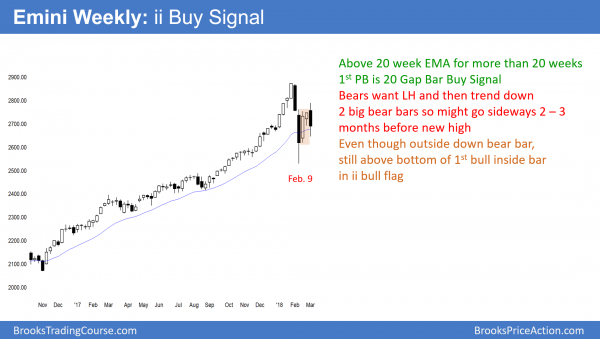 The weekly S&P500 Emini futures candlestick chart broke above consecutive bull inside bars this week. Yet, it sold off to below last week’s low, forming an outside down bar on the weekly chart. However, the tail on the bottom of the bar weakens the bear case.

The weekly S&P500 Emini futures candlestick chart traded above last week’s high and then below its low. Hence, this was an outside down week. That is a sign of strong bears. However, on Friday, the bulls got back up to last week’s low. This significantly weakens the outside down bar.

After 65 consecutive weeks without touching the 20 week EMA, the bulls had a 20 Gap Bar buy setup. However, the 65 week streak was the longest streak in the history of the stock market. Consequently, the bulls are exhausted. They therefore are less willing to buy, even with a good buy signal.

The past 2 weeks formed an ii (consecutive inside bars) breakout mode pattern, and both bars closed on their highs. Last week was therefore a good buy signal bar. Yet, there were more sellers than buyers above last week’s high. This week’s outside down bar was a terrible entry bar for the bulls who bought above last week’s high.

Technically, this week was not enough for the bulls to exit their buy above the ii. The stop for those bulls is below the low of both ii bars. This week only traded below the 2nd, but not the 1st. It is therefore reasonable for the bulls who bought above last week’s high to continue to hold long.

If the coming week is a bull inside bar, it would become a 2nd buy signal bar. That would increase the probability of a rally back up to the old high.

Outside bar often leads to an inside bar

An outside bar is a relatively big bar. There is therefore an increased chance of a smaller bar next week. Furthermore, because the past 4 weeks have been sideways, the weekly chart is in a tight trading range. All markets resist change. This, therefore, increases the chances of next week continuing the tight range.

If the bulls can prevent the bear breakout, the weekly chart would have a breakout mode setup for the following week. If next week is a bull bar, that would be another buy signal bar on the weekly chart. The odds still favor a test of the all-time high rather than a break below the February low.

Will this be a Spike and Channel Bear Trend?

The bears want the 2 week collapse in early February to be a spike that leads to a channel down for the next several months. This week in consistent with that, but the bears need strong follow-through selling next week before traders will conclude that the weekly chart is in a bear trend. More likely, it is in a trading range. However, the odds are that it will trade sideways for a few more weeks before it resumes back up to the all-time high. 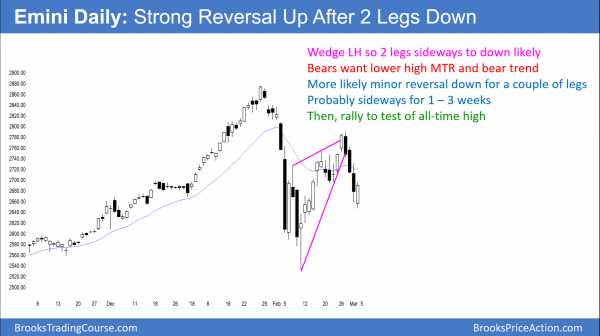 The daily S&P500 Emini futures candlestick chart sold off this week from a wedge lower high major trend reversal. However, it rallied strongly on Friday back up to last week’s low. The reversal will probably be minor.

The daily S&P500 Emini futures candlestick chart sold off strongly this week from a wedge rally. A wedge reversal typically has at least a 2nd leg down. Therefore, the bears will sell any 2 – 3 day rally next week, knowing that it will probably reverse back down for a 2nd or 3rd leg.

Bounce, then one more leg down before bull resumes

While this is a major trend reversal setup, 60% of major trend reversals evolve into trading ranges. That is what is likely here. The bull trend should resume within a month or so. The Emini will probably make a new high within a couple of months. However, this selling has been severe, and it will might limit the extent of any rally for the remainder of the year.

Friday is a buy signal bar for next week. Yet, it followed 3 strong bear bars. Therefore, it is a weak buy setup. This is true even though the odds favor a new all-time high within 2 months. The bulls will probably need a micro double bottom before the bull trend resumes up to the old high. In addition, the wedge lower high will probably have a 2nd led sideways to down after any reversal up next week.

The monthly chart is in a strong bull trend. It is unlikely to sell off for more than 3 months before testing the all-time high. Consequently, the selloff on the daily chart will probably last another month or two. Is it in a bear trend on the daily chart? No. It is in a trading range where the legs up and down are huge. The odds favor a new all-time high within a month or two.

Test of the February low?

The odds are that any remaining correction will stay above the February low. But, even if the bears get a break below that low, the bear breakout will likely fail. This is because the bull trend on the monthly chart is strong, and there has been no credible top on that chart.

Furthermore, the two reversals up this month were exceptionally strong. They therefore constitute a small double bottom in a 10% correction. In last week’s report, I said that as strong as the 3 week rally was, it was likely to form a wedge lower high. I showed that on the figure of the daily chart.

The importance of a double bottom

When there is a strong selloff, the bulls usually want to see a test of the low before they will buy and hold for a new high. They want to see the bears make two strong attempts to create a bear trend and fail twice. This week’s reversal down created a lower high. The bulls want the selloff to reverse up either now or within 2 – 3 weeks from a lower test of the February low.

The odds are that this week’s selloff will be the 1st leg down in a 2 legged sideways to down pullback from the 3 week rally. The Emini will probably bounce next week for a few days and then have a 2nd leg down. There might be a third leg, which would form a wedge bottom.

In either case, the odds are that it will form a higher low compared to the February low. The bulls would see a reversal up at that point as a double bottom and a successful test. If the bears fail twice, the odds of the bull trend resuming are greater. The bulls would be more confident that they can beat the bears. The Emini would then have a better chance of rallying up to the all-time high over the next couple of months.