Monthly S&P500 Emini futures candlestick chart:
How to trade a breakout to an all time high 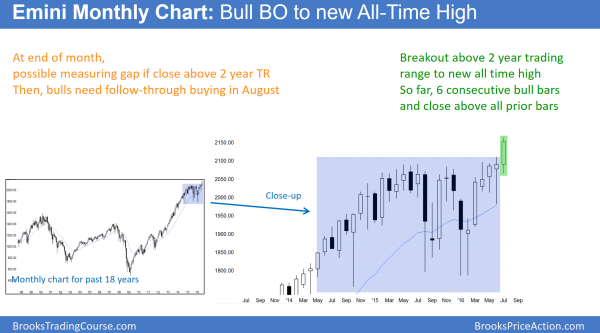 The monthly S&P500 Emini futures candlestick chart has a big bull breakout bar above a 2 year trading range. While there are still 2 weeks left to the month, this is good for the bulls. They want the month to close on its high and far above the range. They then want August to also be a big bull trend bar closing on its high. Finally, they want a series of consecutive big bull bars closing on their highs, like in 1994. The more signs of strength that the bulls create, the higher the probability of a big move up.

The odds are against them getting everything that they want. The bears know what the bulls want and they want the opposite. They therefore want July to reverse strongly and close on its low. Otherwise, they want other signs that the bull breakout is weak. For example, they do not want the month to close on its high. They want August to have a bear body, and they prefer August to be a strong bear reversal bar.

Target for the bulls

At the moment, the monthly chart is strongly bullish. The obvious target for the bulls is a measured move up based on the 300 point height of the 2 year trading range. That target is around 2400. Will it get there? They have about a 40% chance.

Because the trading range is late in the bull trend, it probably will be the Final Bull Flag before at least TBTL Ten Bars, Two Legs sideways to down. A 10 bar correction on the monthly chart is about a year. The minimum target for the bears after the failed bull breakout is a test to the bottom of the trading range, around 1800. Because there is no sign of a top, it is better to think about being long than planning for a reversal. The weekly S&P500 Emini futures candlestick chart had a strong bull trend bar after last week’s breakout to a new all-time high. After 3 strong bull bars, bulls will probably buy the 1st reversal down. The bulls this week wanted a bigger bull body and a close on the high. Because the candlestick pattern was not as strong as it could have been, the risk of a pullback is greater.

The weekly S&P500 Emini futures candlestick chart formed a good bull follow-through bar after last week’s breakout to a new all-time high. After 3 consecutive strong bull trend bars, there is enough buying pressure so that traders will buy the 1st reversal down. Hence, any reversal down will probably lead to at least one more leg up. 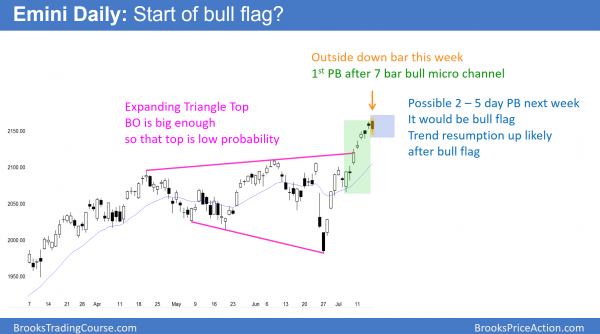 The daily S&P500 Emini futures candlestick chart formed an outside down day on Friday. As a result of the strong 7 day bull micro channel, the reversal attempt will probably become a bull flag.

The daily S&P500 Emini futures candlestick chart had a 7 bar bull micro channel and a strong breakout to a new all-time high. As bullish as this is, the stop for the bulls is now at least 100 points, or 5% below. An increasing number of institutions will conclude that this risk is unacceptable. Hence, they will need to reduce their risk. The easiest way is to reduce their position size.

When a lot of institutions stop buying and instead begin to sell out of part of their long positions, the Emini will begin to pullback. However, the institutions have been so eager to buy that they have been buying above the prior day’s high all week. Most will be eager to buy below the prior day’s low. The odds are high that the bulls will buy the first reversal down.

However, because the Emini is so overbought on the daily chart, they will take quick profits if there is not an immediate strong bull trend resumption. The odds are that there will not be. This means that there will then probably be a 2nd pullback shortly after the 1st one.

Friday’s outside down day is a pullback, and it is probably the start of a small bull flag. As a result of the strong bull trend, the 1st bull flag will probably be small. Bulls will eagerly buy it. Many will wait for a High 2 buy setup, which is a micro double bottom. Because the bull trend is so strong, any reversal down over the next week will probably be minor.

The bears need either a huge bear trend bar or a series of small bear trend bars before traders will begin to believe that the breakout has failed. Even then, both of these reversals will probably need at least a micro double top before they begin. In conclusion, the downside risk is minimal next week, and the best the bears can reasonably hope to see is a pullback. However, that pullback will probably be a bull flag and not the start of a reversal down.