Although the day failed twice above yesterday’s high, is overbought, and quickly became Always In Short, the 1st 2 bars had bull bodies, the 1st bar was a doji, and the Emini is still in a tight bull channel. There are reasonable arguments for the bulls and bears, and some trading range price action. This increases the chances for an early trading range. The swings for the past 2 days lasted 3 – 4 hours, and traders will look for that today, but the odds are higher for a trading range because the Emini just had a 2 day relief rally after a sell climax on the 60 minute chart. Until there is a clear breakout up or down, traders will mostly scalp, and many will look to enter with limit orders.

Pre-Open Market Analysis for the S&P 500 Emini: Day traders expect the price action to remain sideways to up

As I said over the weekend, the Emini was likely to rally early this week because the monthly chart still could reasonably form a triangle, and since the monthly chart is still in a bull trend, the bulls would probably buy any sharp test of the August low (the 2nd down in the potential triangle). The minimum goal was about 10 bars and 2 legs up on the 60 minute chart, and it was met yesterday.

The bulls see the rally on the daily chart as a double bottom and higher low with the August selloff, and a failed breakout below the 3 month trading range. The bears see it as a bear flag. The selloff was strong enough on the daily chart so that the rally will probably be sold and it will be followed by a test down. However, the bulls on the 60 minute chart see the bear flag and think they can get a bull breakout above the bear flag and then a breakout back above the December 14 bottom of the 3 month trading range.

The Emini is up 17 points in the Globex session with about 40 minutes to go before the NYSE opens. The 60 minute chart is in an early bull channel, which can break out to the upside or downside. The momentum up is not strong, but a bull breakout above the bear flag could quickly lead to a measured move up. There is better than a 50% chance that the bulls will try for a bull breakout this week. The swings up and down have been good, and day traders have been making money buying and selling, with both swing trading and scalping, and with stops and limit orders. This is a good trading market. Day traders will expect big swings again today.

The weekly chart is a doji so far, but there are still several days left. The bulls want a bull reversal bar and the bears want a big bear trend bar. The odds favor either a doji or a small bull bar. This means that the Emini will probably end the week around where it is or slightly higher.

The Emini will probably gap above yesterday’s close and maybe above yesterday’s high. That increases the chance for a swing up or down. Traders will look for a stop order entry, like a double or wedge top or bull flag, or for a strong breakout up or down. The bulls have slightly higher probability, but that can change quickly.

The 3 day pullback in the EURUSD continued overnight, but it is still above the January 5 higher low, and the bulls still see it as a 3 day bull flag after the January 7 bull breakout. I mentioned last week and on Monday that the pullback would probably test around 1.0800, which was the bottom of the sharp selloff on January 8. The EURUSD got there overnight, and has been in a tight trading range for the past 6 hours. The selloff has a wedge shape. A bear channel is a bull flag and the odds favor an upside breakout today or tomorrow. There is a 40% chance of a strong bear breakout and a test of the January 5 low around 1.080.

Even if the bulls get a bull breakout above the 60 minute bull flag, the rally needs to get strongly above 1.1000 before traders will be confident that the 6 week trading range has ended and a 2nd leg up on the daily chart has begun. The daily chart is still in breakout mode with the probability still slightly higher for the bulls.

The overnight range has been tight. Most traders should wait for a breakout. Scalpers will buy below bars near the bottom and sell above bars near the top, looking for 10 pip scalps. 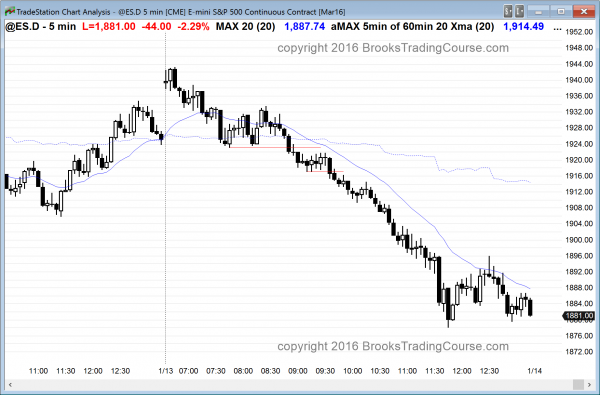 After 2 hours of limit order trading, the bears created a couple of gaps, which were followed by a small pullback bear trend. It ended with consecutive sell climaxes before noon.

Today was strong bear trend day. It was an outside down day. The bulls hope for a bull inside day tomorrow to create an ioi buy signal for Friday. The bears want a break below the September and August lows.

A strong sell climax late in the day has a 50% chance of follow-through selling in the 1st 1 – 2 hours tomorrow. It also has a 70% chance of 2 hours of sideways to up trading, which might have begun in the final 90 minutes today. Today was a good day for the bears, but the Emini is just above the yearlong trading range low. You can read my weekend blog for my thoughts about the weekly and monthly charts. The 5 minute chart had a strong bear trend and then a 20 gap bar test of the moving average. The bulls hope that the late selloff will become the final leg down before they are able to create a lower low major trend reversal.

The bears would like strong selling tomorrow, like a gap down and a collapse below the bottom of the yearlong trading range. Either is possible, and swing traders will be ready for both. The trading range in the final 90 minutes might be the final bear flag, and bulls will look for a reversal up tomorrow if there is a bear breakout or gap down.