I am on leave Thursday and Friday, and will not do an intraday update on Thursday. I am writing Wednesday night and the market might look very different once it opens on Thursday. 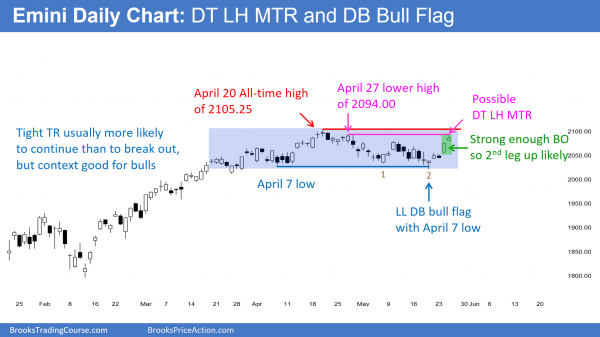 Breakout of High 2 bull flag. Like in all trading ranges, both the bulls and bears have reasonable setups.

All trading ranges have good buy and sell setups. Here, the bulls have a double bottom bull flag after a failed breakout below the trading range. They had a strong bull breakout of a high 2 bull flag and a double bottom bull flag on Tuesday, and they got acceptable follow-through buying Wednesday. Tuesday’s breakout was strong enough so that bulls will probably buy the first reversal down. This is especially true since Wednesday had a bull body, which traders see as follow-through buying. However, the Emini could then continue sideways, as it has done for 2 months.

The bears want a DT LH MTR. If the Emini reverses down here, it will form a double top (DT) with the April 27 high, and the double top would be a lower high major trend reversal (LH MTR). Only 40% of major reversals lead to actual opposite trends. Many traders will not sell until there is a strong breakout below the May low. If that were to occur, the probability of a bear swing would be much higher than it is now.

The bulls and bears have both made several strong attempts to break out of the 2 month trading range. What is different about this breakout attempt is that it follows a failed bear breakout below the trading range; Tuesday’s breakout bar was big and closed on its high, which means it was strong; April had a small range and this rally is credible attempt to have May go above April’s high (the all-time high) in the final days of May and form an outside up month; and, the weekly chart had a 4 week pullback from an 11 bar bull micro channel. Most pullbacks from strong micro channels usually end in 1 – 3 weeks. This one lasted 4 and was therefore excessive, and that gave more momentum to Tuesday’s reversal back up. Also, a micro channel that lasts 10 or more bars has a 60% chance of testing the top of the micro channel (here, the all-time high) within a few bars after the pullback ends and the bull trend resumes.

Since Wednesday was a small day that stalled below the April 27 lower high, instead of breaking strongly above that lower high, the odds of more sideways trading for a day or two, or of a 1 – 2 day pullback are slightly higher. However, there are only 3 trading days left in the month, and the bulls are clearly trying to get May to go above the April high. This means that they will be eager to buy a pullback in these final days, which should keep any pullback brief and shallow.

Traders always have to consider the opposite, especially when something is as obvious as the outside up attempt is here. This means there is a small, but real, chance that the Emini will race back down to below the April low by the end of May. If this begins to happens, those who trade the markets for a living will not deny it. They will sell as soon as they see strong downside momentum.

I am on leave Thursday and Friday, and will not do an intraday update on Thursday. 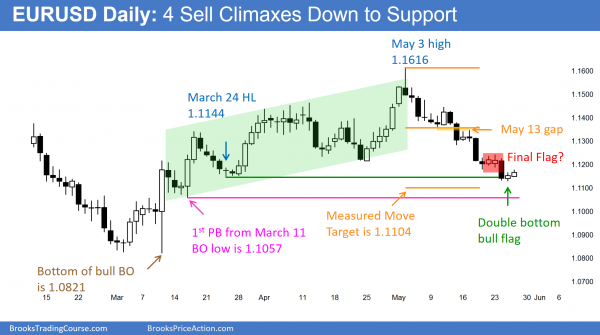 The daily chart of the EURUSD Forex market has had a series of consecutive sell climaxes and is now at support.

The EURUSD Forex daily chart has fallen in a series of 4 consecutive sell climaxes, and it is in a support zone. This means that it can bounce at any time. However, the bear channel from the the May 3 high has been tight. This means that the 1st reversal up will probably be minor. A minor reversal is a leg in a trading range. Bears will sell it, looking for a test back down. The bears would see the rally as a right shoulder in a Head and Shoulders Top.

Measuring gaps are reliable when clear, and the May 13 gap was clear. The odds still favor a test of the measured move target at 1.1104, which is only 24 pips below Wednesday’s low. This might be close enough for bears to take profits and for bulls to begin to buy, expecting a tradeable bounce from this support area after a series of sell climaxes over the past month. Is also close to the bottom of the March 11 1st pullback from the strong bull reversal. The bottom of the 1st pullback in a Spike and Channel rally is also a magnet that often gets tested.

Although the bears might break strongly below this support, especially after a wedge top on the weekly chart, this is not the type of selloff that typically falls relentlessly. A series of sell climaxes without much of a pullback usually is followed by a TBTL (Ten Bar, Two Leg) rally. Traders will be ready for this and the EURUSD can reverse up quickly, since everyone expects it. However, there is no credible bottom yet, and there are still targets just a little lower.