The Emini opened with a big gap down and traded below yesterday’s low, the 60 minute moving average, and the breakout point at the top of the bear flag on the daily chart (the January 27 high). However, the odds are that there will be buyers below yesterday’s low. As bearish as this open was, the odds are for an early sideways to up move to reduce the size of the gap below the moving average. Most traders will be unwilling to sell this far below the average price, unless this bear open continues down for many more bars, which is unlikely.

Much more likely is that the Emini trades sideways to up for 1 – 2 hours until it gets closer to the moving average. It might form an early low of the day and rally all day, but the size of the gap and the early big bear bars make a trading range more likely. The trading range will have both sell and buy setups. The result will then be a breakout mode setup. Most traders should look for small swings and scalps up and down until there is a clear swing, which probably will not happen for at least 1 – 2 hours.

Pre-Open Market Analysis
S&P 500 Emini: Day trading tip is that the selloff will be bought

The Emini reversed down at the end of yesterday at the 50% pullback of the January selloff, as expected. The selloff continued overnight and the Emini is down about 17 points in the Globex session. On the daily chart, the candlestick pattern was a bull follow-through day after Friday’s bull breakout above a bear flag. This means that there is about a 60% chance that the 1st pullback from the rally will be bought and that there will be at least one more test up, which can be as short as one day.

If the Emini falls below the August low, it could quickly move down to the next major support, which is the monthly bull trend line that is around 1700. The odds are better than 50% that this will happen. If the current rally on the daily chart breaks back above the December 14 low, which is the bottom of the 3 month trading range, or if the Emini enters a trading range that lasts 20 or more bars, the probability for the bears will fall to about the same as for the bulls. Both will again have a 50% of a successful breakout of the 2 year trading range.

I have been saying since the December 3 bull trend reversal on the daily chart of the EURUSD Forex cross that the odds are that there would be at least one more push up. All that has changed is that every bar that gets added to this 2 month trading range reduces the probability to closer to 50%. However, the odds still favor the bulls.

The price action has been in a triangle in 2016, with higher lows and lower highs. However, we already know that the 2 month trading range is a breakout mode pattern. The triangle simply means that the time of the breakout is probably getting very close. The legs up and down are getting smaller.

Every time there is a rally on the 60 and 240 minute candlestick charts, bulls who are learning how to trade the markets get hopeful that a bull breakout is underway. Experts who trade the markets for a living know that 80% of breakout attempts up and down in a trading range fail, and expect this one to fail as well. Because the triangle is getting tight, a breakout is likely soon. Until there is a strong breakout, day traders will continue to scalp.

They will buy low and sell high. When the range has been as tight as it has been, many will enter with limit orders, selling above prior highs, buying below prior lows, scaling in, using wide stops, and scalping for 10 pips. Day traders entering on the 60 minute chart will scalp for 20 – 50 pips, depending on how big the current swings have been.

Most beginning day traders cannot trade this way. If they are looking for bigger swings, they should trade crosses with the Yen or look to buy the selloff in the USDCAD for 150 – 200 pip bounce over the next week. 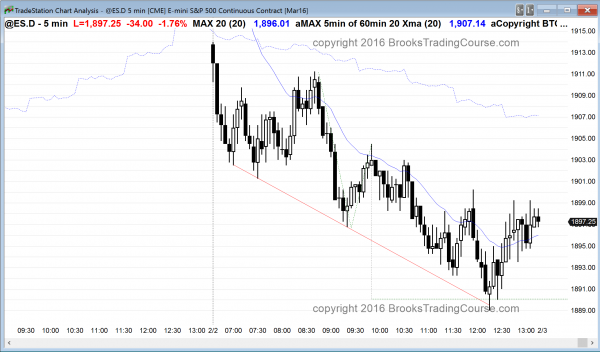 The Emini had a big gap down and then it went sideways until it reached the moving average. It then sold off in a spike and channel bear trend, and reversed up from a wedge bottom and leg 1 = leg 2 measured move at the end of the day.

The Emini totally reversed Friday’s rally, but reversed up from a wedge bottom at the end of the day. The reversal was not strong, but it was enough of a sign of strength to weaken the bear case and make it likely that tomorrow will have at least a couple of hours of sideways to up trading staring in the 1st 2 hours. Since the wedge bottom was a big pattern, the likely 2 legged reversal up will probably have 20 or more bars. The rally at the end of the day is probably the 1st of 2 legs up. Less likely, the bears will get a double top with the lower high around 1900, and then a selloff for a measured move down.