The Emini began with a limit order open within Friday’s 4 hour range. This increases the chances of a lot of trading range trading today. Yet the 4 hour range is tight. The odds are that there will be a breakout and measured move up or down.

The Emini in the open had a breakout above a Small breakout of a Small Breakout. While it immediately pulled back, the Emini is Always In Long. It therefore has a slightly greater chance of successful bull breakout and measured move up. Yet, the limit order bears made money, and there is no breakout yet. This trading range could last 1 – 2 hours before there is a breakout and then a measured move.

The stock market will probably rally to above Dow 20,000 and sell off 5% to below the August high. Traders are deciding which will come 1st. There is no sign yet of a breakout. While the Emini is in breakout mode, the intraday swings have been big enough for 4 point swing trades. That will therefore probably continue.

The Emini is down 4 points in the Globex market. In addition, it has been in a narrow range. While the odds still slightly favor a bull breakout and a brief move above Dow 20,000, the bulls will not continue to wait forever. At some point, if they do not get their breakout, they will sell out of their longs and look to buy lower. The next significant support is at the August trading range high, which is 100 points below.

The current trading range is now 6 weeks long. Because that is a lot of bars, traders are ready for a strong breakout up or down. The need to see a breakout that contains a series of strong trend bars up or down before they believe that the trading range has successfully evolved into a trend. 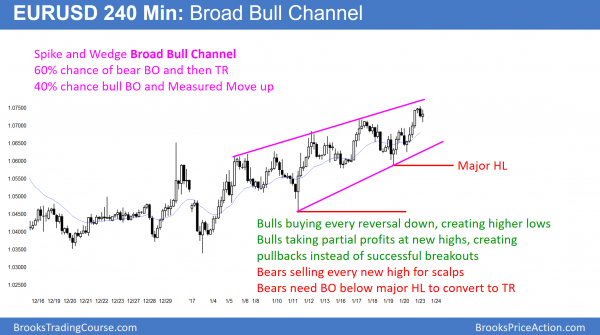 The EURUSD 240 minute Forex chart is still in a broad bull channel.

There is no sign of a top. Yet, bulls are taking partial profits at every new high. In addition, bears are selling above prior highs for 50 pip scalps. With both bulls and bears selling, the EURUSD is pulling back deeply after every new high.

However, the bears are unwilling to sell lower and to hold. In addition, the bulls are buying again above the most recent higher low. The result is that the bull channel continues to grow.

Bull channel will end this week

The channel has now had 5 new highs. Since that is unusual, the odds are that it will end this week. While the odds favor a bear breakout and then a trading range, there is still a 40% chance of a bull breakout and a measured move up. Until then, traders will continue to trade it like a broad bull channel.

The EURUSD pulled back overnight after another strong rally to a new high. It has been in a narrow range for the past 12 hours. Every new high in the broad bull channel led to a trading range that lasted about 24 hours, and then a pullback to a higher low. Hence, the odds are that today will be mostly sideways, even though the 60 and 240 minute charts are in a bull trend. Yet, because this channel has lasted an unusually long time, the odds are that there will be a breakout up or down this week. 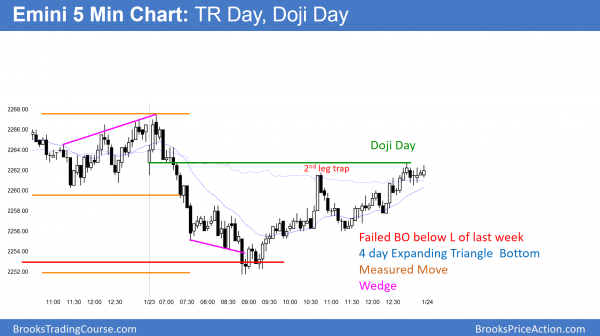 The Emini sold off to below last week’s low, triggering a weekly sell signal. Yet, it reversed up to the open of the day.

While it is holding above the daily moving average, it is in a tight trading range. The odds are slightly better for a bull breakout.